The period from 2001 until 2008 was a time of a great expansion of 1:400 scale models and model brands. The number of true manufacturers remained small, but factories would often produce models for multiple companies or under different brand names. This was also the period when skullduggery and machinations between the various forces in the scale were at their sharpest.
Below: A timeline of 1:400 scale brands and manufacturers from 1997-2008. Colours are used to illustrate general associations: 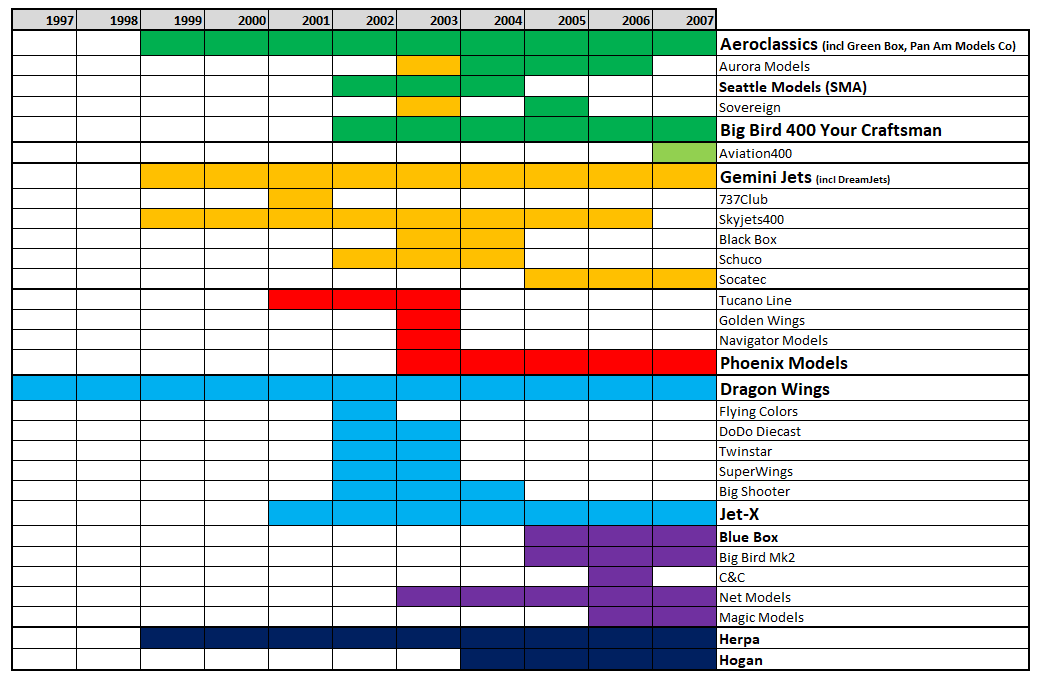 Retailer Brands
In 2001 the main brands were still Aeroclassics, Dragon Wings, Gemini Jets and Herpa (although the latter was already showing decreasing interest). Gemini Jets had already been producing models for retailers for some time, having had a relationship with the Skyjets400 shop since 1999. This sort of retailer sub-brand would briefly become common in the early 2000s and would result in the following brands all of which used moulds from true manufacturing brands for their limited range of models:
​

Black Box Braniff Concorde BBBIA005
History of SkyJets400
There were also commercial deals with other model companies, the best example of which was Gemini Jets relationship with Schuco between 2002 and 2004, whereby the latter simply printed their names on standard Gemini boxes. 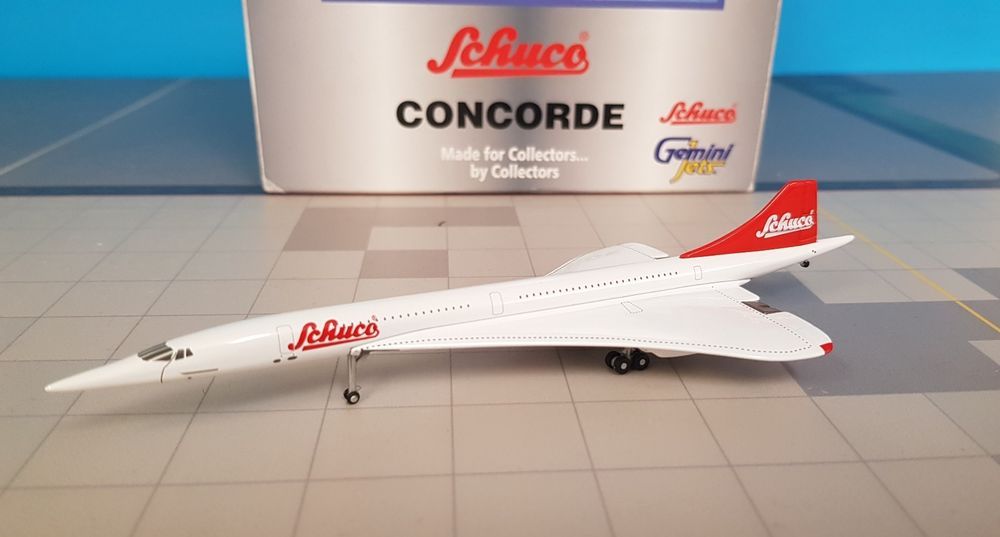 New Manufacturers
In addition to retail stores there were several individuals with a more ambitious idea for their own brands using others models. These would result in 2001 to the creation of three distinctive brands – 737Club, Jet-X and Tucano Line. Each would become well known, and even notorious in the latter case.
The 737Club was a small startup that used Gemini Jets 737 mould as part of a club-style brand. This didn’t last long (only 2001 in fact) but it did lead to its founder Gordon Werner moving on to create his own brand and manufacturer – Seattle Models (SMA). Briefly SMA would challenge the big boys and bring a set of high standard quality models to the scale. These are generally still well thought of today so it is a shame that SMA went out of business in 2004. For a detailed look at SMA click the button below:

SMA 737-200s
Jet-X was the brainchild of Brian Wiklem who built a relationship with Dragon Wings, which allowed him to use their moulds for a range of mainly American models. Jet-X would grow to become one of the largest brands by individual releases. In later years Jet-X would begin to design and builds its own moulds as its relationship with Dragon came to a gradual end. Its ownership would also change but that will be covered in part 3. ​For a detailed look at Jet-X click the button below:

Jet-X Hawaiian MD-80s
Tucano Line started as another independent who used Dragon Wings moulds. It however had grand ideas to create its own moulds but took the poorly thought out action of acquiring half built moulds, being created for Gemini Jets and Aeroclassics, behind their backs. This caused an avalanche of opprobrium and a major scandal in the scale. On top of this the models weren’t often particularly good and Tucano setup several other brands (Golden Wings, Navigator Models) to try and pedal their stock to unsuspecting buyers. Tucano did not survive this and disappeared in 2003 leaving a factory holding a huge amount of built but unpaid for stock. 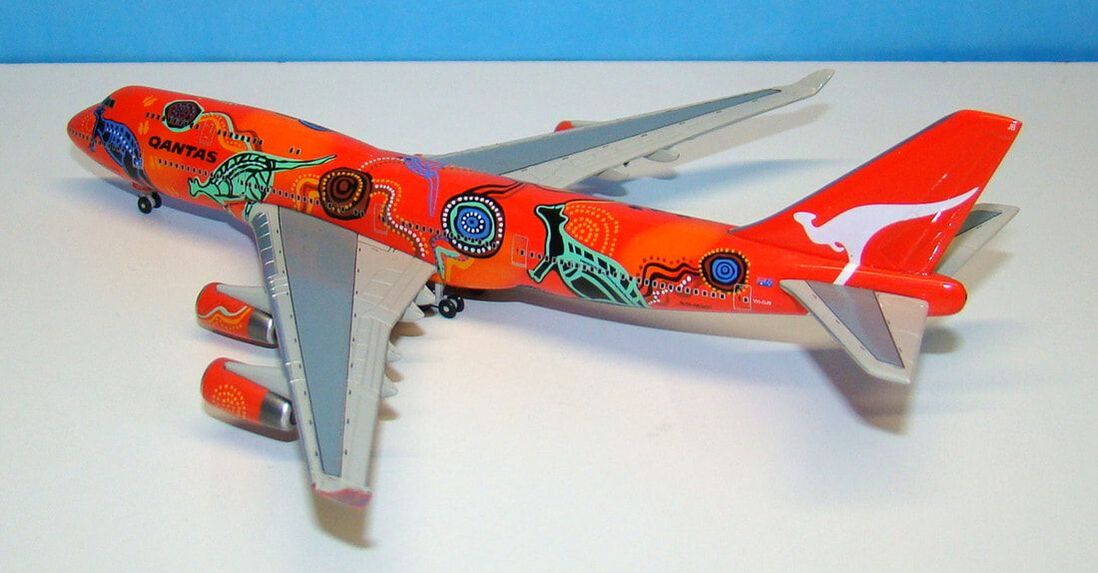 A surprisingly decent Qantas Wunala Dreaming Tucano Line Boeing 747-400
Looking to at least make good some of its loss Gemini Jets helped the factory out by reselling it and thus Phoenix Models was born. Initially it was just another poorly thought of brand selling old Tucano Line stock but gradually it built its own moulds and improved its reputation to become a major player in 1:400 scale. For more on Tucano see:
Below: A couple of early Phoenix Models from 2003/2004 using Tucano Line moulds
The Big Three
Below: The earliest die-cast moulds from Aeroclassics included the Sud Aviation Caravelle II and Turbojet 707-320
Below: During this period Gemini Jets made both retro and modern airliners, usually of national carriers but still sometimes more unusual material was also released
Below: Dragon still had some great moulds like the 747-400F but other moulds, like the 737-300, were hindered by the simple landing gear.
All three of the major brands used mystery sub-brands when it suited them – mainly to avoid licensing issues. There was therefore a proliferation of small brands which acted as shields for the majors to hide behind. Sometimes these brands were used only rarely while others gained some pedigree. In reality the models were no better or worse than the main brand models. Examples include the following:
​
BigBird
History of BigBird
2004 & The Mystery Brands
By mid-2004 the major brands were:
That isn’t to say there weren’t other brands and manufacturers about. There were a variety of more poorly known and often mysterious brands in the market. These rarely if ever had contact addresses, websites or spokesman. ​
In 2003 Net Models appeared using apparent copies of some Tucano Line moulds (mainly 747s and DC-9s). They produced quite a few models including some golden versions but the moulds are of poor quality. 2005/2006 would see the appearance of multiple others – Blue Box, BigBird Mk2, C&C and Magic Models. Often these companies appeared to use inferior copies of other moulds, especially 747s. The models appeared and disappeared and few knew much about who was actually making them – although Johan Chan’s name appears linked to many of the brands.
Blue Box Models was the most high-profile of these mystery brands as they in 2005 made unique L-1011 Tristar and Tristar 500 moulds. These non-standard brands caused the ire of Aeroclassics and Gemini Jets who were not keen on the competition or what they saw as the underhanded business methods utilised. The arrival of the Blue Box Tristar also likely put paid to the development of an Aeroclassics version and the update of the Gemini Tristar mould.
History of Blue Box & Magic Models
Bubble, Bubble, Toil & Crumble
​Many of the models from the mystery brands have not aged well and Magic Models and some Blue Box, especially, are very prone to paint bubbling. This is caused by poor processes when applying the paint. They did however avoid the biggest menace to hit 1:400 scale - Zinc Rot. Zinc Rot had a catastrophic affect on some models made at the Jinbo Factory during the 2002-2004 period and has impacted specific releases from various manufacturers before and after. There will be an upcoming article on Zinc Rot soon.

Zinc Rot destruction
Changes at the Jinbo Factory
It was during 2007 that the situation at the Jinbo Factory, operated by Witty Industrial Co. Ltd began to change. Witty was formed by two investors from Hong Kong who took out a HK$5 million loan from HSBC. They were later joined by two further investors but the business was not profitable. In 2007 one of the original partners was bought out and there was disagreement between the remaining original partner and the two newer partners.
Below: Some of the new AV400 moulds were not particularly good. The 737 below is average but the A319 is poor
At about the same time Aeroclassics moved its production away from the Jinbo Factory and switched to a new factory at Aoxiang in Qingyuan, Guangdong along with the other remaining original Jinbo owner. In doing so they lost access to the BigBird 747 and 767-300 moulds, which were owned by the Jinbo factory. The relationship between Aeroclassics and the factory owners had broken down, partly due to the fallout from the Zinc rot scandal, and as a parting shot several Aeroclassics moulds (Boeing 707, Convair 880 and 990) were illegally copied. This resulted in much animosity and legal action between the involved parties.
Even though Aeroclassics was eventually successful with its legal action it did not stop the expansion of the Aviation400 brand, which morphed into several other names in later years, as it had access to a variety of its own moulds and the old BigBird examples.
Round-Up
By 2007 the set of major 1:400 brands had changed only slightly with the loss of Seattle Models but the addition of Blue Box and Aviation400. Almost all of the small retail led brands had ceased production but there was still a proliferation of mystery brands such as Net Models, Magic, Sky400 and Big Bird Mk2.
Below: I guess I should mention Herpa were still about in 1:400 Scale. Although they produced great models like this AN-124 they made very few releases and concentrated on 1:200 and 1:500 scale.

BigBird itself was by this time merely a shell name for certain Aeroclassics releases and the usage of the brand would cease in 2008. Jet-X had switched to producing its own models but its days of independent ownership were coming to an end. It would soon be sold to the owners of Blue Box and become just another of many random brand names they used for a variety of their moulds.
Below: Jet-X broke with Dragon and had a real thing for BAE-146s
The major players steamed on into 2008 as the Global Financial Crisis began to develop. The next period in the history of 1:400 would see a lot more stability as the number of brand names decreased and a new centralised JC Wings grew into a major player in the scale. This later period will be discussed in part 3.