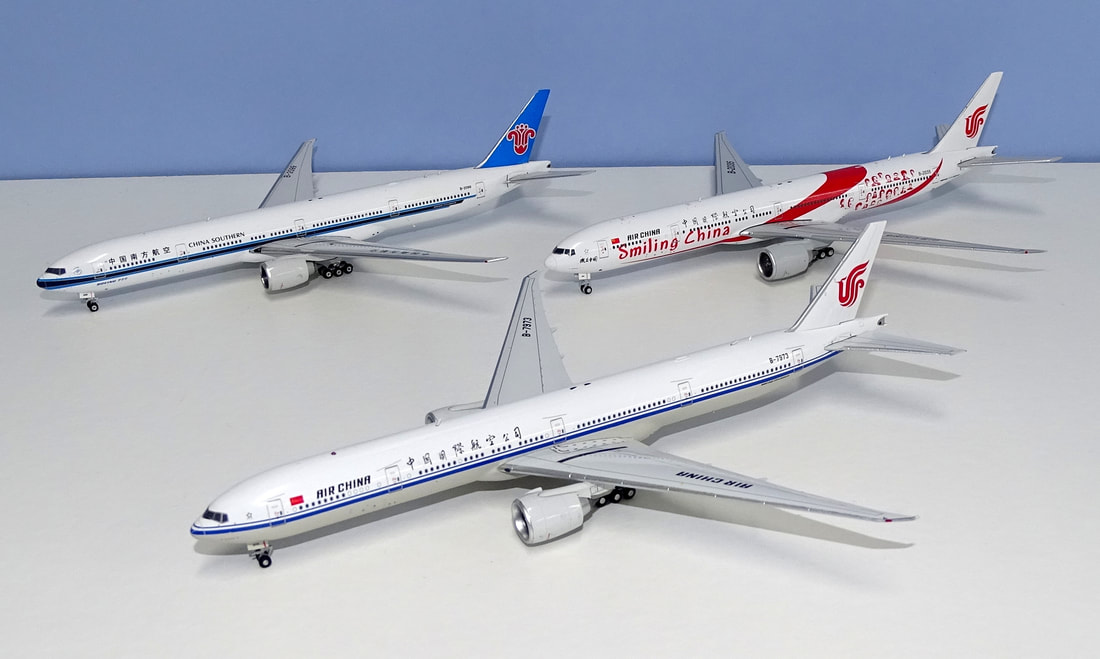 777-300ERs from Phoenix, JC Wings and Aviation400
The 777-300 started out as merely a stretched version of the 777-200 trading extra capacity for range. It was aimed primarily at high-density regional routes within Asia and sold to airlines such as Cathay Pacific, Singapore Airlines and Thai Airways International. In the end only 60 of this version sold with the last delivered in 2006. It was the 777-300ER that insured the 777 line continued into the 2010s. It features raked extended wingtips, a strengthened fuselage and wings plus new engines. These features enabled a much higher MTOW and fuel load giving it back the range advantage lost with the original 300. First delivered in April 2004, to Air France, the 300ER has been by far the highest selling 777 variant with over 800 aircraft delivered.

The longer variant of the Boeing 777 started out with broadly the same moulds available for it as the series 200, just lengthened. In recent years this has changed as the 777-200 has begun to fall out of usage with age, whereas the 777-300ER at least remains a major variant - albeit one whose production is winding down. This has meant that although JC Wings did create new versions of the 777 mould for both variants the latest mould, by Aviation400, only exists for the series 300ER. 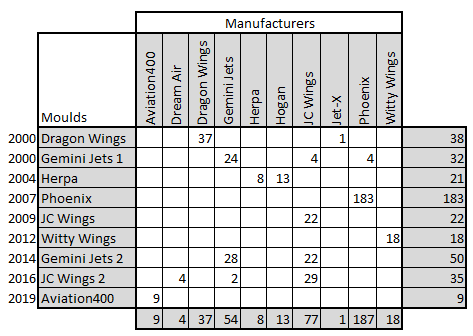 Aero Icarus from Zürich, Switzerland / CC BY-SA (https://creativecommons.org/licenses/by-sa/2.0)
Japan Airlines and All Nippon 777-300ERs with the bigger GE engines and the raked wingtips:

Gemini's 777 is one of those classic rock solid moulds that used to typify Gemini - in a good way. It has an excellent body shape, superior to the Dragon Wings at both the nose and tail. It also has much better undercarriage, although obviously given its age it is not rolling gear compatible. The gear is also perhaps a tad on the short side something which is especially obvious with the longer 777-300. Nonetheless the mould has aged reasonably well as long as the fuselage seam, caused by the cradle mount mould, isn't a problem for you. For secondhand models it shouldn't be but for new releases when there is a competitor it should and there is plenty of competition for 777-300s nowadays that means you should rarely have to settle for this older mould. Gemini have subsequently modified the landing gear and still use this mould (see the 1b version below).

This mould was used by Phoenix in 2005/2006 when they shared factories with Gemini Jets and prior to the introduction of their own casting. Additionally for reasons that make little sense to me JC Wings actually switched to this cradle mount mould from their slot in wings version in 2014, but only released a few models prior to the mould's upgrade.

Herpa followed up their lacklustre 777-200 with a similarly dreadful 777-300 5 years later. Take off the undercarriage and perhaps it wouldn't look so incredibly clumsy. Although it is seamless the total package is not impressive and anyway since it is used by Herpa and Hogan it rarely gets a run out anyway. I just ignore Herpa and Hogan 777s and you should too!

Without a shadow of a doubt the most important 400 scale mould ever made by Phoenix are their 777s and they have dined out on the excellence of these for years now. The series 300 version came four years after the 200 but shares all the same major characters. It easily eclipsed all the rivals available back in 2007 and continued to do so for over a decade, however even updated with aerials and domes the mould is now showing its age. It is no longer the best 777 available in 400 scale but still can hold its head high as a very nice casting.
Phoenix continues to use this mould into 2020, but how long can they continue to do so when up against the newer moulds is anyone's guess.
JC Wings 1 (2009-2012) - used 22 times

Back before JC Wings tookover production of Gemini Jets and gained access to their moulds they created their own 777s. It is pretty decent although it never really got a lot of use and struggled against the much loved Phoenix version with which it usually competed. The shape overall is good, however JC seemed to sometimes struggle to print the cockpit well and I'm not sure if this is a mould or just a print issue. It does have nice rolling gear and a slot in wings seamless mid-section, but the maingear seems to sit too low and the engines are close to the ground thanks to the pylons. For some reason JC Wings stopped using this and switched over to the inferior Gemini Jets mould. The decision doesn't really make a lot of sense to me.
Witty Wings / Apollo (2012-2014) - used 18 times

Towards the end of their existence Witty Wings were beginning to show signs of good innovation. This 777 mould must have been one of their last new moulds but was a decent effort and featured see through engines - something rarely if ever seen before in 1:400. The mould is seamless and has rolling gears. The engines do seem a little close to the ground but overall it was a good mould that saw far too little usage before Witty and their sub-brand Apollo folded.

The old Gemini Jets mould had static landing gear. Following the move of Gemini production over to JC Wings several of their older moulds have been updated and in 2014 it was the turn of the 777. Unfortunately they merely replaced the landing gear and added antennae leaving the rest of the mould alone. The new gear rolls but to my eye appears to make the aircraft too tall. This isn't the end of the world, but buying a modern widebody mould with such a major seam on it in 2015 seemed wrong let alone in 2020, especially when the competition has had a seamless mould since 2007. JC Wings also switched over to this mould and it took a few years for them to create a new 777-200 mould to replace it. The mould isn't a disaster but it is just outdated even with the updated landing gear and aerials. If you collect US airlines you are rather stuck with it since Phoenix just don't compete often in that space and JC Wings don't produce US airlines except on very rare occasions. For some reason Gemini has only been able to acquire use of the infinitely superior new JC Wings tooling for a pair of Japanese Government releases and so they continue to use this obsolete mould.

JC Wings announced the releases that would use their new 777-300ER mould in 2016 but as is standard the mould didn't actually appear until near the end of 2017. Considering one of these won my model of the year in 2017 you can tell I have a high opinion of it. It also has the bonus, as all new widebody JC moulds do, of coming in both flaps-up and flaps-down versions. This is what I had to say at the time:
The fuselage shape is perfection, with an excellent all over shape that in some areas surpasses that of the Phoenix mould. One of these areas is the tailcone. The 777 has an unusual asymmetric tailcone with the APU exhaust on the port side. The tailcone itself is square but not completely flat ended like on the Phoenix mould. The JC wings APU is moulded as a separate piece allowing better definition in this area.

All the major aerials are represented on the mould and are nicely to scale. Moving to the landing gear and it is intricately made and accurate, aside from the JC Wings standard light grey gearlegs and wheelhubs. On the underside the maingear bay doors are not just printed but also indented as part of the mould. This compares favourably to the Phoenix 777, which has no detailing on the underside at all. 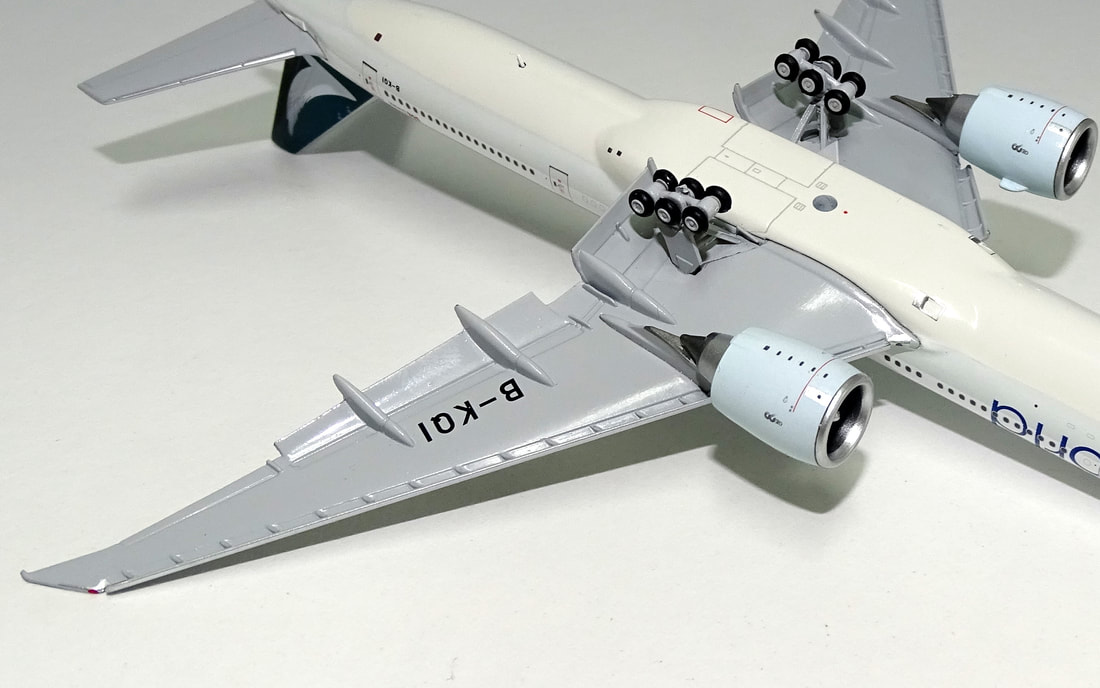 Flaps Down on the latest JC Wings 777-300ER
One area of criticism on the Phoenix mould has been the size of the engines and their pylons, which have been thought too small for some. That is not an issue with the new JC Wings mould. The engines are larger, maybe even slightly too large, however the ground clearance is still more than adequate. I should also point out that the engines have separate fanblades allowing you to see through them (unlike the solid fan cores of the Phoenix).

My only other possible fault with the mould is the attachment point of the wings to the fuselage. The fit isn’t as tight as on the Phoenix mould and there is a noticeable gap. It’s not particularly bad but it is present. It isn't present on the flaps down versions. 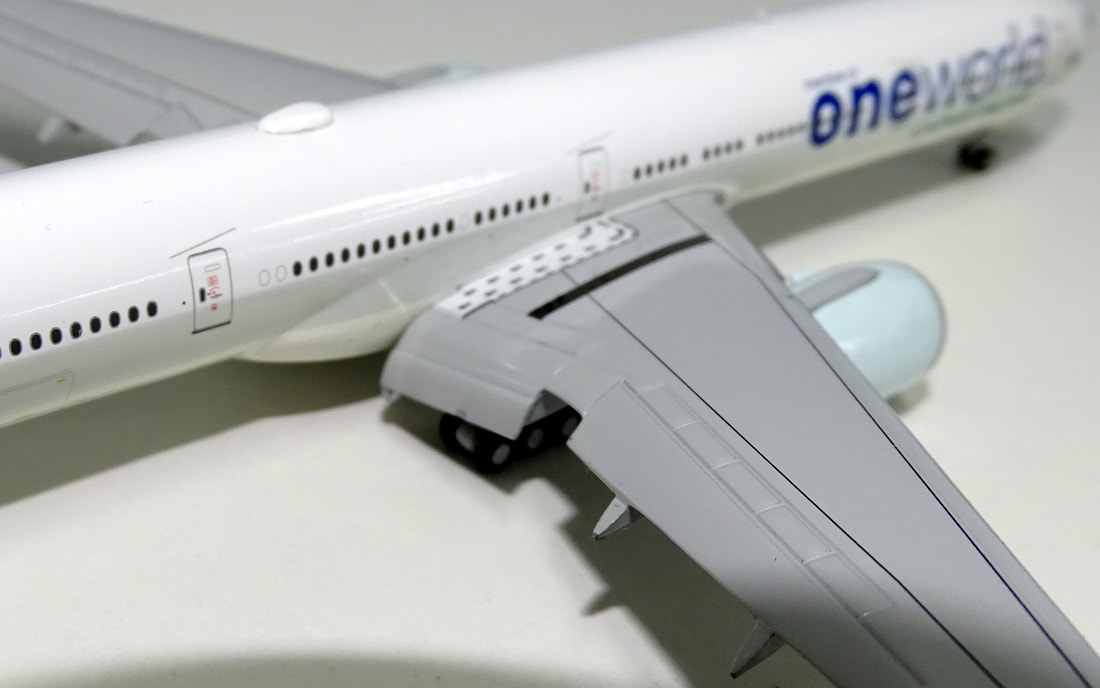 Aviation400 have really begun to make an impact in 1:400 scale, especially with their Airbus A350s. The announcement of 777s in mid-2019 was a real challenge, however it wasn't until near the end of the year the first release came out, and being of China Airlines it didn't get the exposure it might have. Now with more releases, including KLM versions, it is likely to get noticed.

The casting itself shares many similarities with the new JC Wings mould but has differences at the nosegear, engines, nose and maingear and tailcone. Some of these are improvements and some are not so the two moulds make an interesting comparison. For a detailed review of the AV400 mould see:
New Contender: Air China Boeing 777-39LER B-7973 by Aviation400