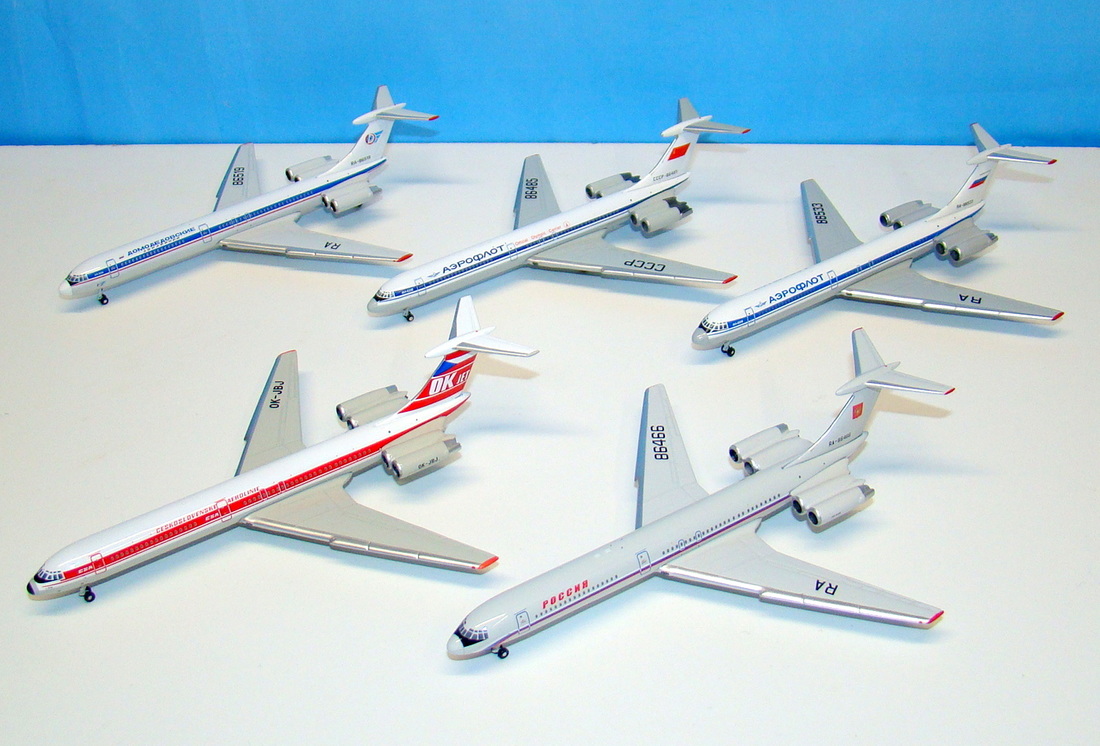 When it first flew in 1963 the Ilyushin IL-62 (NATO codename Classic) was the world's largest passenger jet, though it had a rather tortuous development period and didn't actually enter service until 1967. Despite a passing similarity to Vickers VC10 it is very much its own design and following the retirement of the huge Tupolev TU-114 it was the only Soviet long-haul jet airliner for over 20 years. In the end 292 aircraft were produced, the majority of which (193) were the improved IL-62M variant. Following the breakup of the Soviet Union the IL-62 found itself in servie with several of the new CIS states as well as a host of Russian start-up airlines. Despite its relative inefficiency it wasn't until the economic crisis of 2008 that the IL-62 largely disappeared from Russian skies.

I had been under the mistaken assumption that there had been only one 400 scale Il-62 mould but I was wrong and recent information provided by the DAC forum member Phantom II has enabled me to update this review. Thanks Phantom II. All IL-62s that have been made in this scale represent the later IL-62M version. 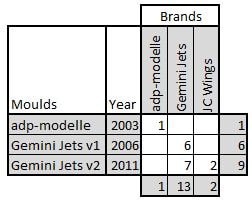 Here are some shots of the IL-62M 'Classic' in action:

Aldo Bidini (GFDL 1.2
The IL-62 'sans suffix' original version is basically externally similar to the IL-62M except it has the older less powerful Kuznetsov NK-8 turbofan engines rather than the IL-62M's Soloviev D-30KU turbofan engines. You can see in the below photo of an original IL-62 that the engines look different in profile:

adp-Modelle (2004) - 1 Model
Text and images by Phantom II
Early in the 2000s adp-Modelle (some of you may know "Master Modelle" plastic kits) decided to venture into 1/400 scale with an IL-62M in colors of Interflug, registered DDR-SET, marketed under "Schaefer collection". After quite some problems and delays, the model finally hit the market in 2004. Sad enough, this release stayed the only one in this scale by adp/Schaefer and only 500 units were produced. Another (Soviet) mould that was in the works never saw the light of day. Quite interesting, the rumors about this release also set Gemini Jets on alert as they were also working on their IL-62 at the time. adp is known for doing limited edition cars and trucks of mostly Soviet/GDR types. They also have a 1/120 scale An-2 on offer.

The model was rather light weight as it did rely on plastic parts with the fuselage being either Al-cast or white metal, which is what adp usually used. The printing and detailing wasn't really up to par with models of some other makes - still it wasn't bad and a nice addition to many collections. Today mine shows rather severe yellowing on the tail sadly.
Gemini Jets Mould (2006 - Still Available)  - 15 Models
Gemini's own IL-62 didn't appear until 2006 and has been used sporadically ever since with several modifications to update it. The original mould had a rather tall nosegear but subsequent modifications have rectified this.
Gemini Jets slipped out the odd IL-62 between 2006 and 2009. Only a handful of models were made representing in order of production:


All of these models are very nice, though the Air Koryo does seem to suffer from misplaced cockpit windows which somewhat spoils it.

It was to be another two years until the next IL-62 in the colours of LOT appeared and by then the mould had been updated with rolling gears. This was not a total success as the nosegear seems to be too short in this release making it look a bit odd, not helped by some poor cockpit windows too. It was another two years, in 2013, before the mould reappeared with an excellent Aeroflot Soviet colours example with Moscow Olympics markings. The issues the LOT model showed had been fixed with this release which is excellent.

The improved IL-62M (left) and the original version (right). Modifications relate to the undercarriage.
Given Gemini's reluctance to produce unusual or non-airline ordered aircraft releases it is unsurprising that the mould has not been used regularly. This is a shame as there are several interesting airlines that could be made using the mould - albeit few that would probably sell in the numbers Gemini typically produces. 2015 brought Gemini's 9th release and since 2018 there has been a minor renaissance of the mould with a further 5 releases both by JC Wings and Gemini Jets.
One of the IL-62's most characteristic features is the extendable rear landing gear strut under the tail used to stop the aircraft tipping backwards when unloaded and on the ground. Gemini has catered for this novel feature with a detachable strut which can be fixed in place to represent the gear lowered or another piece which can be fitted inside the cavity to represent the gear raised. Its a nice touch though it can be tricky to fit sometimes.

In later releases the rear strut has been improved and is substantially thinner:

It has been really pleasing to see Gemini release several new IL-62Ms in the past year or two and hopefully this will continue. There are still a few that may merit Gemini production levels and a couple of others that I'd love to see also. Such as:

Aldo Bidini (GFDL 1.2
If JC or Gemini could see their way to modifying the engines to create an original IL-62 the the way would be open to a lot more such as Aeroflot delivery clrs, LOT delivery colours, CAAC, Egyptair and others.