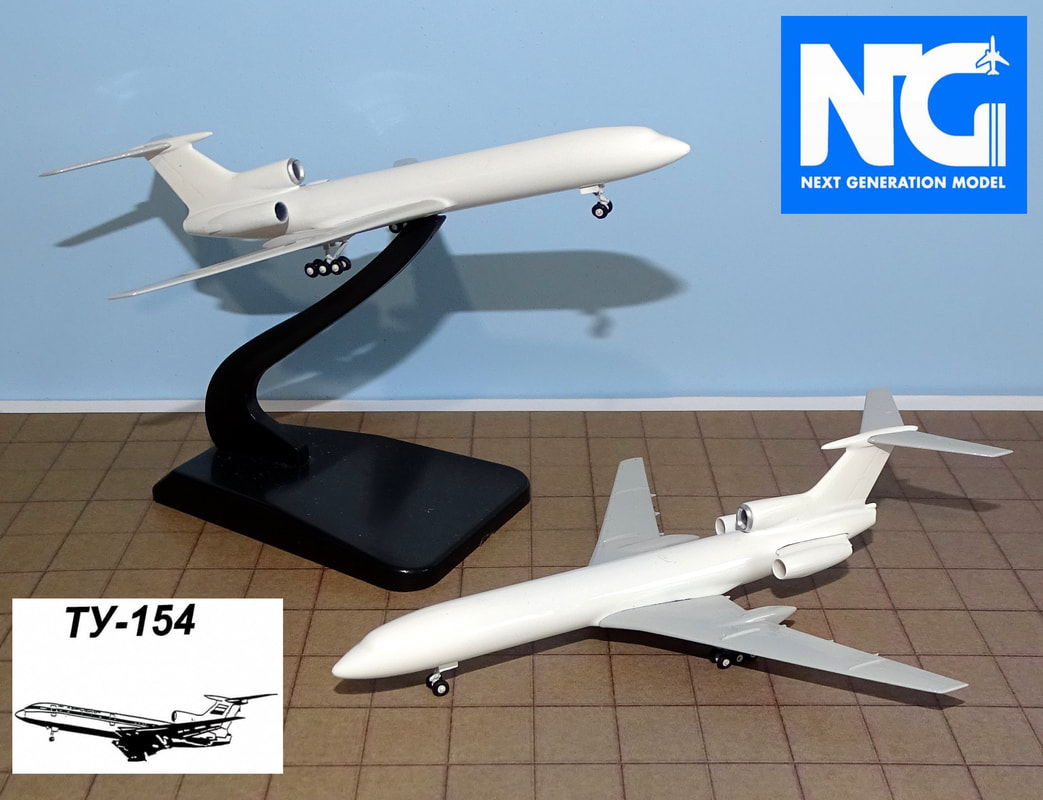 NG Models certainly know how to surprise. Last year it was the completely unexpected appearance of the Tu-204s and this January all of a sudden they had 777s, a 747-8 and a Tu-154M. These are not the models that the collectorate had particularly been asking for (MD-80 and 747 Classics ahem) but NG clearly have their own plan and the new moulds are not without excitement - especially the unfairly maligned 727ski. In reality the Tu-154 was a very different beast to the Boeing trijet and became the backbone of the Soviet and post-USSR Russian fleets well into the 2000s. Pleasingly NG Models have produced both the major variants of the Tu-154 in 400 scale and sent me the sample moulds so once more I will now take a detailed look at the 'Careless'.
SOURCES 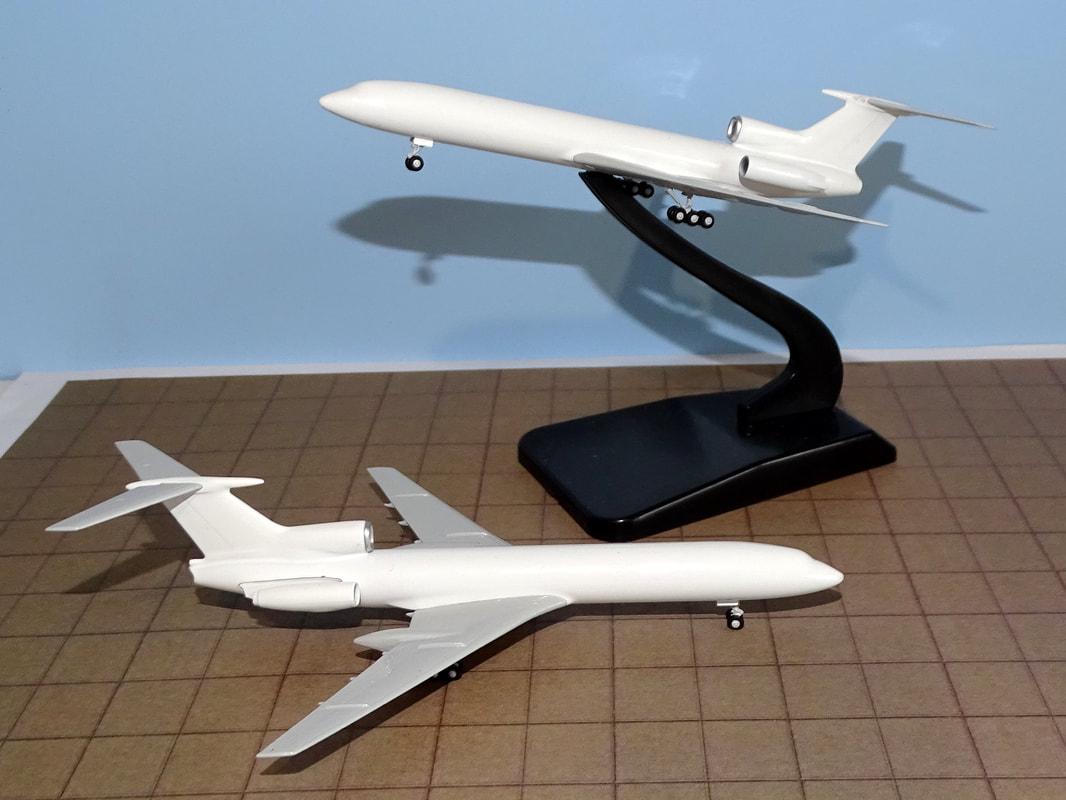 EXISTING MOULDS
The Tu-154 has a rather odd history in 400 scale due to the whole Tucano-Line mess, which means that although all the moulds are related they form two distinct lineages (Aeroclassics and Tucano Line / Phoenix). They share the same base fuselage but with different tail/exhausts and undercarriage. Both lineages have the Tu-154B and Tu-154M available. I discuss this in more detail here:
Tupolev 154 Mould Review

Above: The best Tu-154 to date is probably the modified Phoenix mould as shown here​
In recent years there had been almost no interest in the Tu-154 but that changed in 2020 when Yu ModeLs paid for the repair of the old Aeroclassics mould and released a couple of aircraft, one of which I gave a detailed review of - see: CAAC | Tupolev Tu-154M | B-2609 | YU ModeLs
Above: A couple of the 2021 Aeroclassics releases
Aeroclassics subsequently released a selection of 8 further Tu-154s in 2021. In general they are nice models although the mould has never been the best and isn't up to 2022 standards. I should also mention that DeAgostini / Jet Hut also made a new Tu-154 mould as part of the Aeroflot magazine collection - it isn't up to much.
TU-154 VARIANTS

Soviet-era airliners tend to come with a lot of versions and the Tu-154 is no different. There are 3 main versions of the type that saw airliner service and have external differences a 400 scale mould would pick up. These are:

An early prototype. Note the thinner HF tail aerial and the boundary layer fences wrapped around the wing leading edge
The original Tu-154, and the higher gross weight Tu-154A, was something of a disaster. The type needed a completely new wing designed when it became clear that the original wing had extremely low fatigue resistance and the first 120 frames needed their wings entirely replaced. The primary identifier of the original Tu-154 'sans suffix' is that the HF radio aerial in the tail spike ahead of the T tail was a different model and housed in a much more slender spike. Only 42 Tu-154 'sans suffix' were produced.
Tu-154A/B/B-1/B-2

Rolf Wallner (GFDL 1.2
The A introduced the typical fatter bullet fairing for the new Mikron HF radio antenna ahead of the tail and about 50 were produced. The Tu-154B was the result of the wing problems and the new wings had a different aileron and spoiler pattern. The B version also had a reinforced structure and four equally sized overwing exits but these of course don't show on a model sample.

JetPix (GFDL 1.2
The Tu-154 'sans suffixe' and Tu-154As became known as Tu-154Bs when re-winged although technically they were not. To tell the difference you'd need to look at the HF spike (for a 'sans suffixe') or the overwing exit pattern (for a Tu-154A). Differences between the B version and later B-1 and B-2 are minor and not visible on a 400 scale model.

Shahram Sharifi (GFDL 1.2
The ultimate version of the Tu-154 was the M model. The aim was primarily to reduce the type's fuel-burn and this necessitated using the most fuel-efficient engine available - the Soloviev D-30KU-154 (as opposed to the previous Kuznetsov NK-8-2U). The new engines were larger and meant the M received an entirely new rear fuselage aft of the pressure dome. 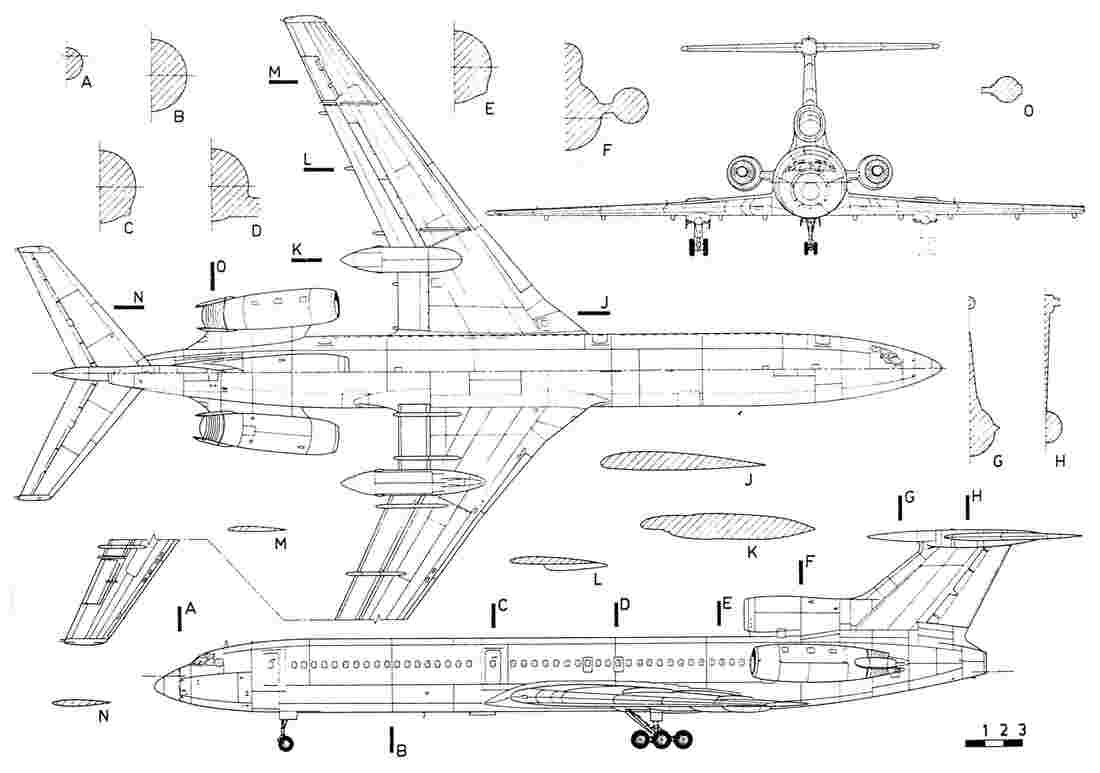 NG Models have made two separate moulds. One replicates the Tu-154B versions (and the rewinged Tu-154A) and the other the Tu-154M. 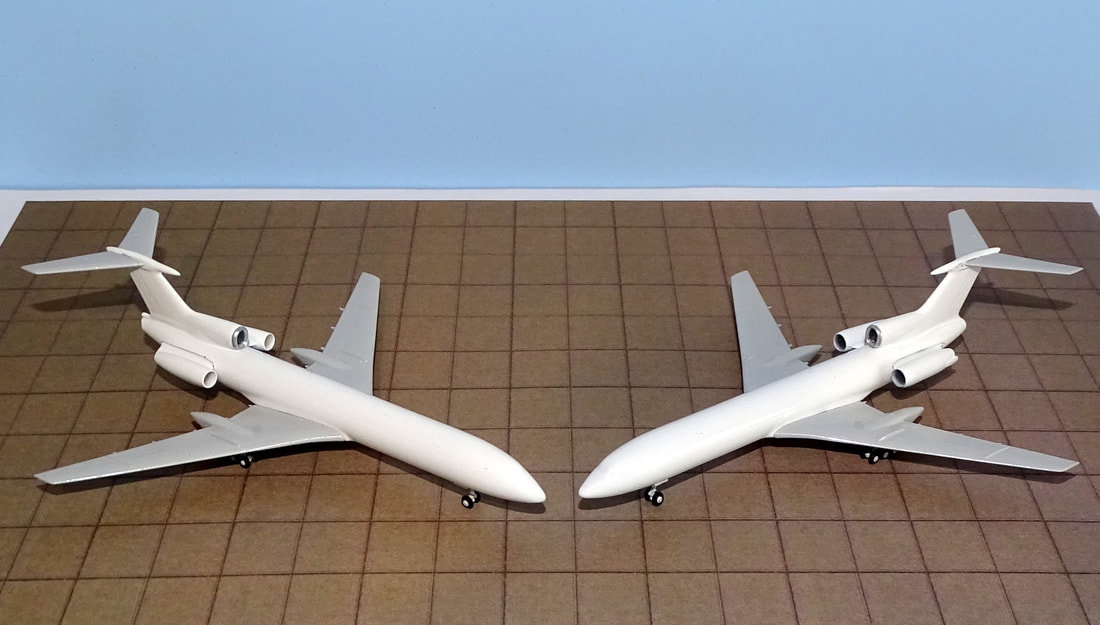 NOSE, COCKPIT & NOSEGEAR
Starting at the front of the aircraft and both variants of the Tu-154 share the same nose and undercarriage. I am really liking what I am seeing of the nose and cockpit region. It has the right rather squared shape over the cockpit and the nosecone has just the right amount of pointiness.

Clearly the nosegear has some issues in relation to the tyre size. The samples have the same size nosegear tyre as used for the maingear when it should be slightly smaller. In addition the thickness of the tyre in relation to the tyre hub is wrong. The hub needs to be wider and there should be less tyre rubber. Comparing with the Tu-204 mould I think they could actually just use the nosegear from that. I also tend to think that the nosegear door is not tall enough (or is perhaps just too recessed into the fuselage). 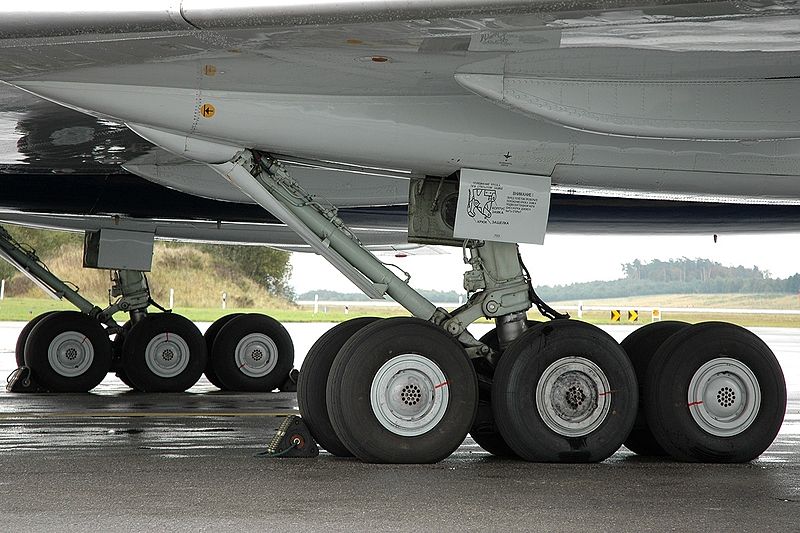 Luc Willems (GFDL 1.2
The Tu-154 has incredibly diagnostic maingear, which is hard to mistake for anything else. NG have captured the look and feel of this much better than they have managed with the nosegear. My only criticisms are minor. The maingear doors could be slightly larger and the join point of the forward gearleg should perhaps be slightly further back to make a join without the slight dog-leg. 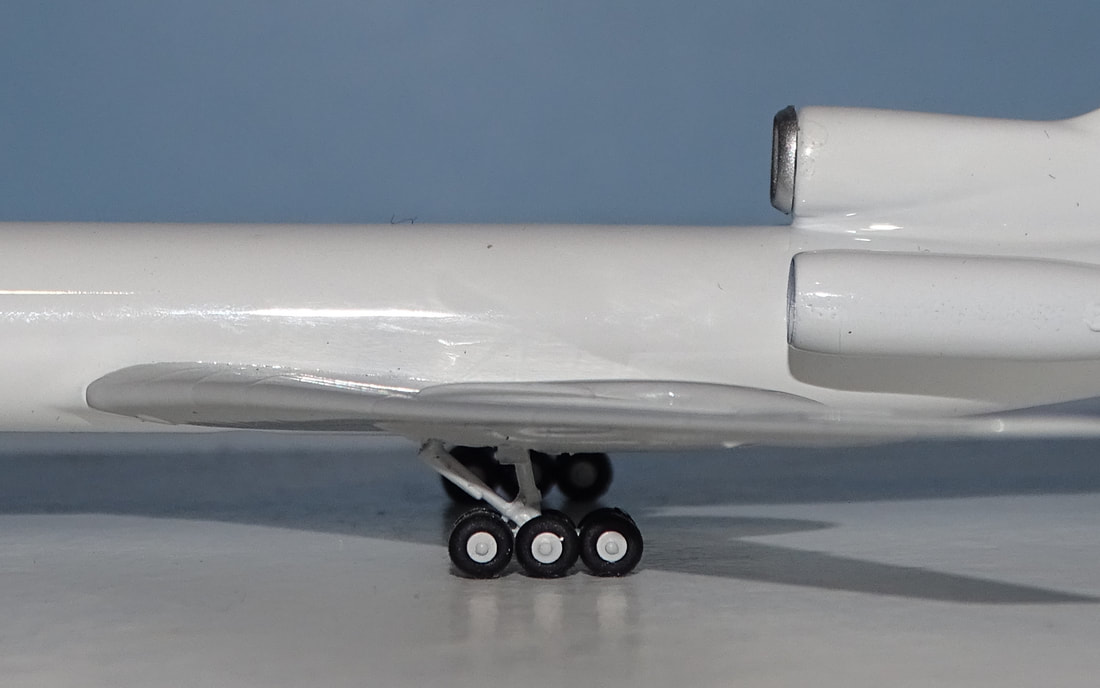 WINGS
Once again the Tu-154 wing is very diagnostic - mainly due to the large bulbous maingear housings, but also due to the boundary layer fences on the upper surface. Overall I am happy with the wing shape - at least for the Tu-154M. The wings attach firmly to the fuselage and are a good thickness. They have a lot of fine aileron and flap detailing. Both the boundary layer fences and the curved, but rather slab-sided, gear compartments look great.
The wingroots of the two Tu-154 variants are slightly different to each other. As can be seen below (and in the 3-view plans earlier) the M version has an expanded root which changes the wing profile giving it a double kink and connecting to the fuselage with a downturned beak look to it. It is a subtle difference you really have to look for. I've been staring at the two samples and to my eye it looks like NG has captured this but on both samples! The Tu-154B should have a single kink wing leading edge and a rounder fairing/fuselage join but the sample doesn't.
This problem of using the M wing also mars the rear margin of the wing for the Tu-154B version. The difference between the two should be that the M has lengthened flap track fairings. As you can see below on the B version only the outermost flap tracks reach beyond the rear wing margin whereas on the M all 5 sets do.

Tu-154M rear wing profile
Once again it is a small point but on the samples both have 5 flap tracks that reach beyond the wing rear margin. These should only be on the M version.

TAIL, ENGINES & REAR FUSELAGE
Obviously it is the rear of the aircraft that is most important for distinguishing the two major variants apart. There are 3 major areas of difference here - the no 2 engine intake, the no 2 exhaust and APU, and the side mounted engines. NG has done well with two of the three but I'm less convinced by the third. 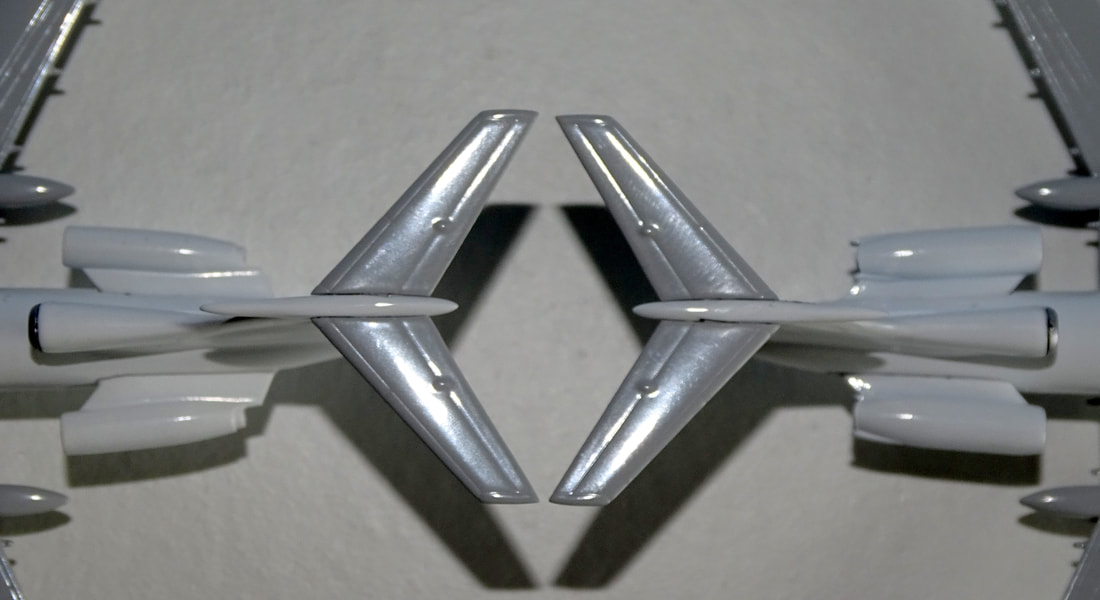 Starting with the side mounted engines and NG has a completely different mould to represent the old Kuznetsovs from the newer Solovievs. This includes the pylons attaching them to the fuselage. The Solovievs are noticeably chunkier and have the distinctive clamshell reversers. The Kuznetsovs are smaller, curvier and have the old style exhausts (the door thrust reversers will be printed on). 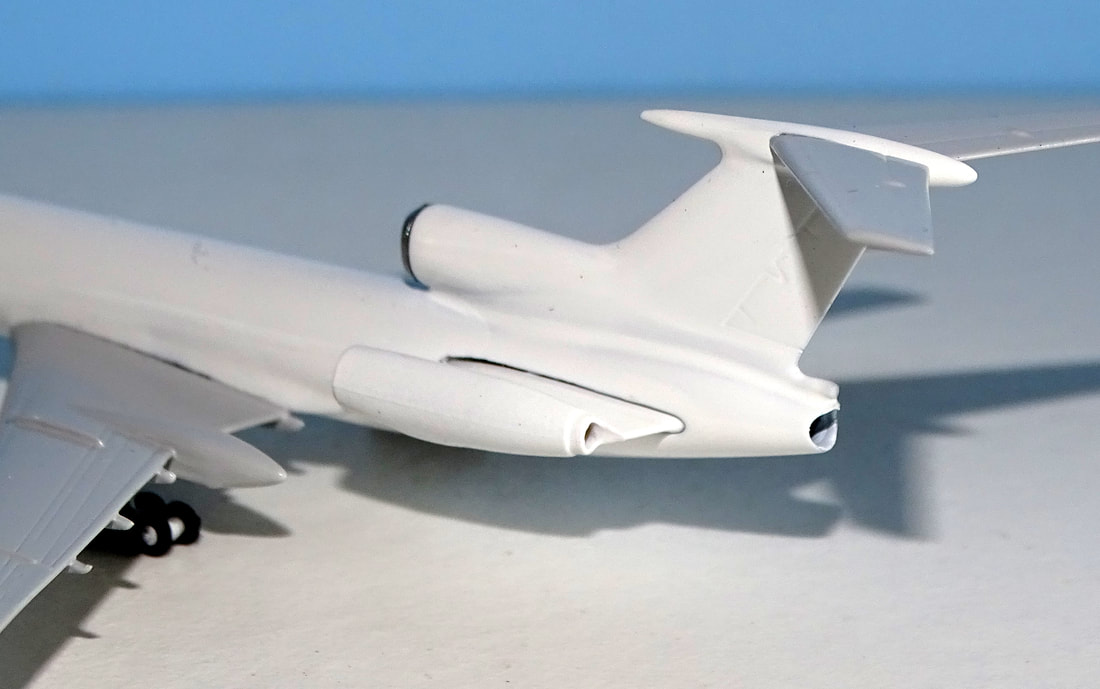 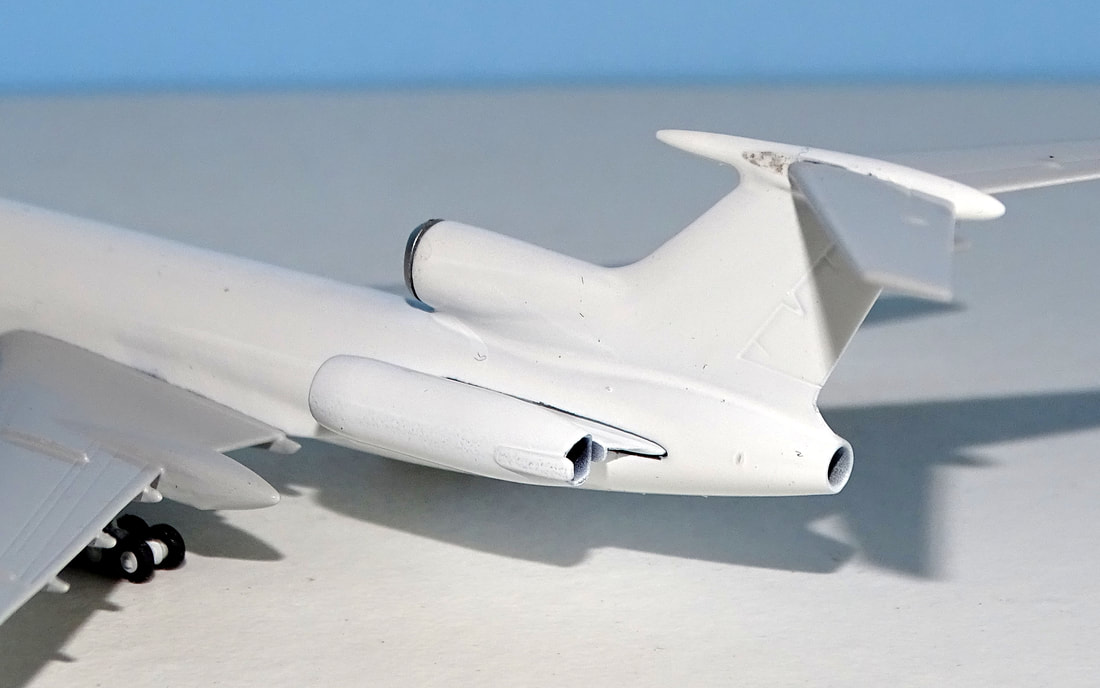 The B has the distinctive concave no 2 engine exhaust with the APU outlet fixed above it. Arguably the exhaust on the B could be slightly taller than it is. The M has the more graceful curved fillet down from the rudder to the streamlined more standard exhaust.

It is the height of the no 2 engine intake that I am less convinced about, at least for the M version. The M has a subtly humpier engine intake than the B but looking at the two samples I'm not really seeing any difference between them and measuring them they are the same height. The B looks ok, but could maybe be slightly more curved at the lip, however I think the M nacelle shape is wrong. It needs to be more strongly arched/humped towards the front and probably a little taller too. 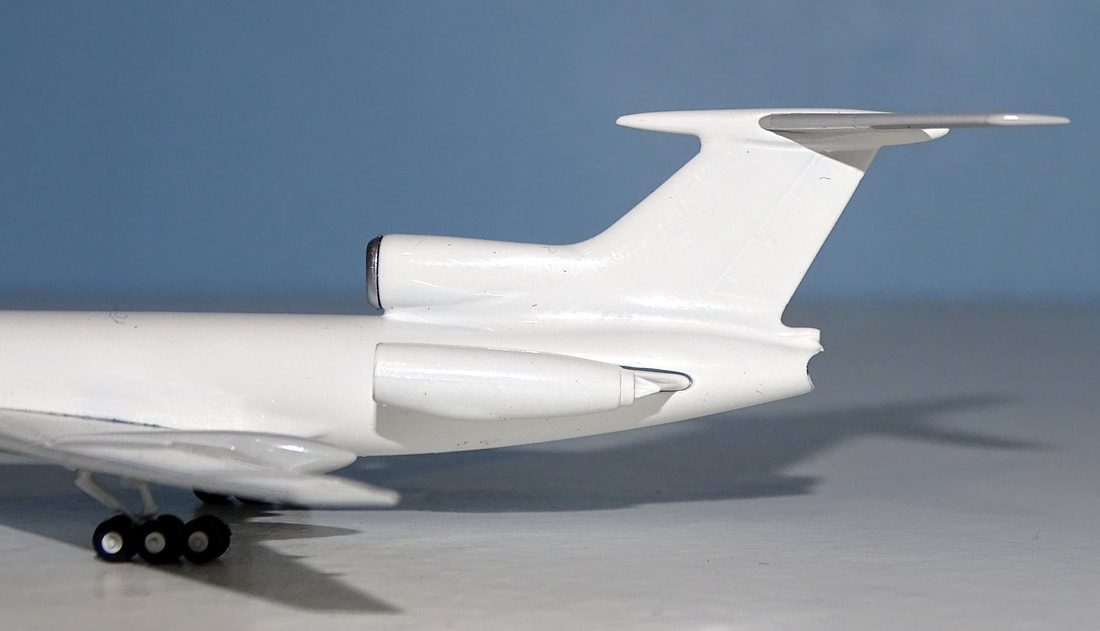 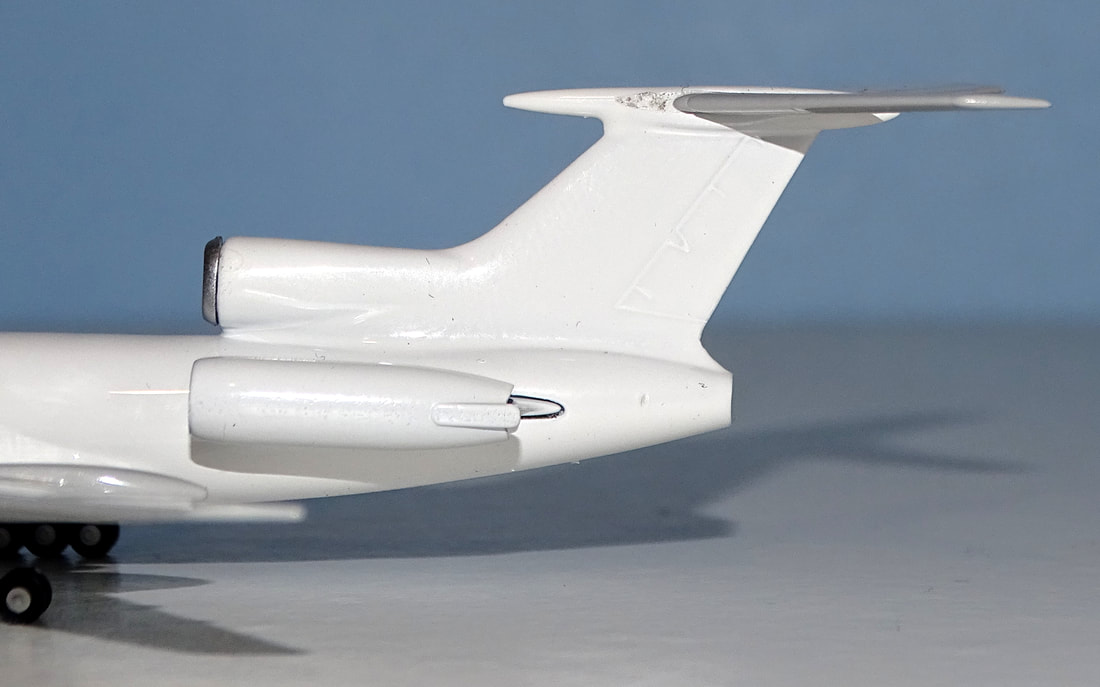 The tail shape and HF aerial spike look excellent on both samples as does the form of the rudder, complete with nice hinge detailing.

From the front the engines do look a little small but I think this is mainly due to the angle of the photos above. 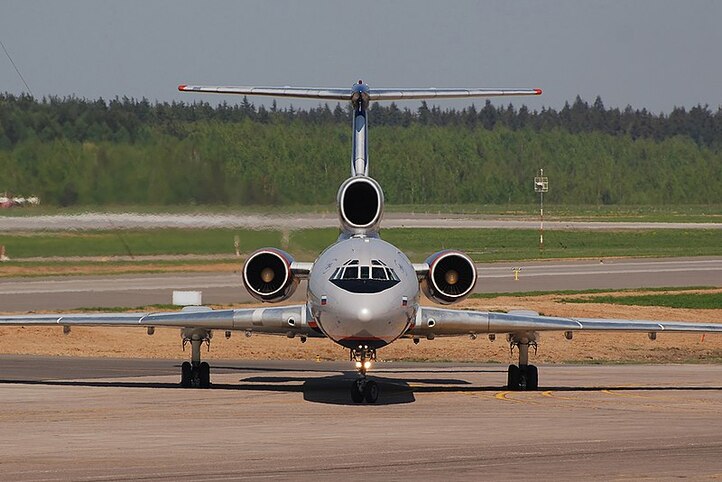 As with the earlier 777s these Tu-154 samples clearly still need some tweaking but a cursory glance at the existing moulds indicates that these new moulds have superior shape and detailing in comparison. What NG needs to work on is getting the detail correct, and correct on the right variant of the aircraft. My suggestions for improvements are as follows: