Text and photos by James C. Kruggel Ph.D. (aka BWI-ROCman from DAC)
Primary Sources: City of Rochester and Monroe County documents, and the Rochester Times-Union and Democrat and Chronicle
1990: Legacy Dominance, High Fares, and Smaller Planes. In the 1990’s, the Rochester market was ruled by the six “legacy” carriers. The legacies had high costs per available seat mile (CASM). The legacy carriers often replaced mainline jets with smaller turboprops and new small regional jets, to the consternation of travelers. Fares soared. The Rochester airport had served about 1.5-1.8 million passengers a year before People Express. The airport leveled off at around 2.3-2.5 million passengers in the 1990’s. USAir renamed itself US Airways in 1997, and adopted a businesslike dark blue livery.

The beautiful new terminal offered a vastly improved airport experience. The two-level approach road, vast ticketing, concessions, baggage, and gate areas offered comfort and convenience. The design included huge wraparound windows in the gate areas, which offer panoramic views of the entire airfield. The 11-gage A (east) concourse served United, American, Northwest, and Continental. The 11-gate B (west) concourse served USAir and Delta. However, Monroe County’s passenger-enplanement projections turned out to be too high, because of consolidation, and the terminal turned out to be overbuilt. 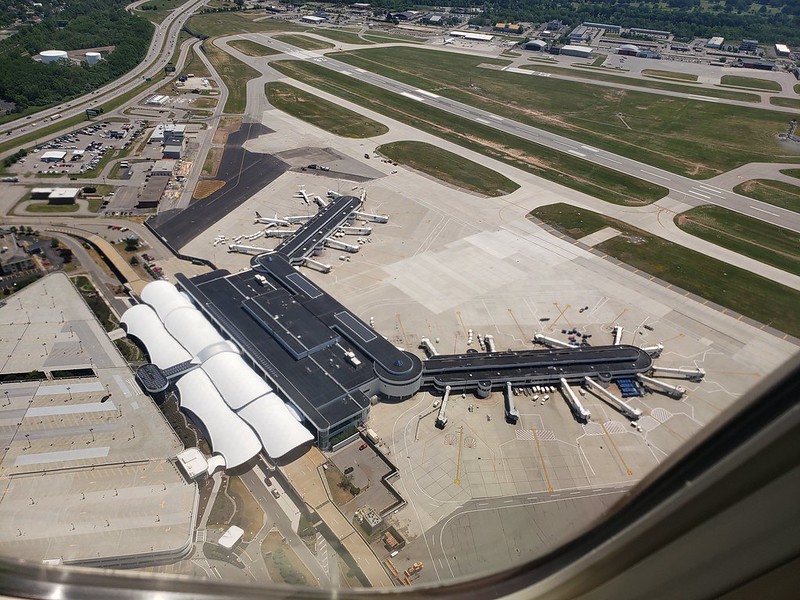 In 1992 Delta introduced Canadair CRJ-200 50-seat regional jets to the Cincinnati hub, marking a long trend of Rochester’s mainline aircraft being replaced by smaller regional aircraft. However, the smaller aircraft offered business travelers the benefit of higher frequency. In the 1980’s Rochester often had 60-80 daily departures; in the 1990’s, over 100. 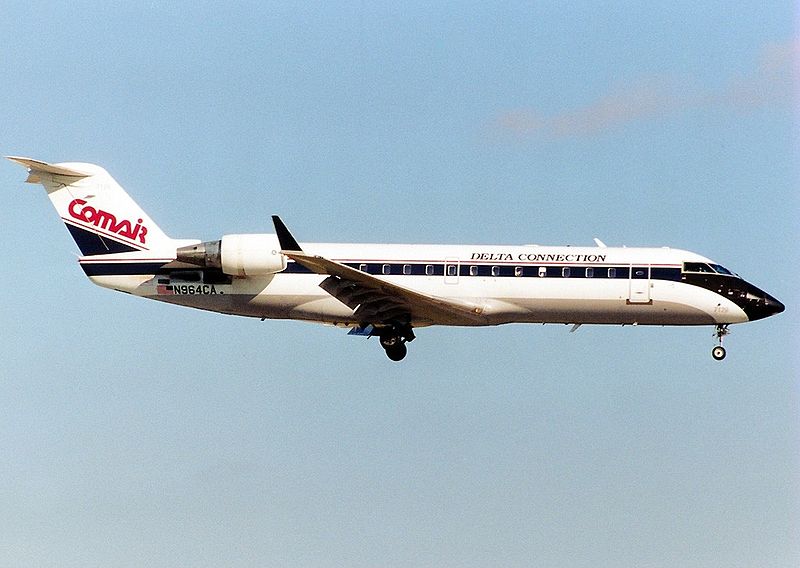 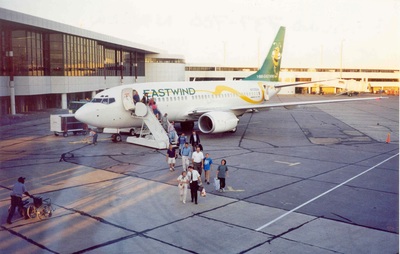 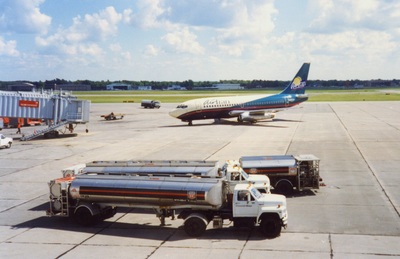 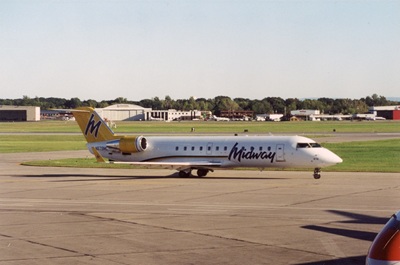 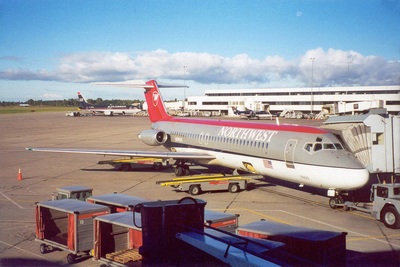 Cargo brought larger aircraft into ROC, including stretch DC-8 service by Emery Worldwide and the splashy green aircraft of BAX Global. FedEx continued to serve ROC with 727’s. United Parcel Service, unfortunately for Rochester, runs its Upstate air service to Albany, Syracuse, and Buffalo, and trucks Rochester cargo even today.
2000’s: Low-Fare Carriers and Market Restructuring. But by 2000, new winds were blowing in the industry and in Rochester. Corporate downsizing continued.  Massive restructuring of the local economy began, as Kodak’s failure to anticipate digital photography reduced the company to a fraction of its former size. Air travel remained essentially sound, if stagnant, in Rochester. But reform was coming for air travelers.

USA consumers and politicians, fed up with high fares, got the government to hold off a proposed United-USAirways merger until a weakening 2001 economy caused United to cancel the proposed transaction. In 2000, airline startup whiz David Neeleman founded low-fare carrier JetBlue Airways using unused slots at New York’s John F. Kennedy Airport. He and investors recognized that a huge market for low fares existed in the wake of PeoplExpress’ demise.
ValuJet Airlines of Atlanta, after suffering a crash in 1996, installed new management, bought small carrier AirTran, and restructured into a stable and profitable carrier with the AirTran name. Quiet Southwest Airlines, which had been slowly adding routes and staying under “legacy” carriers’ radar, suddenly moved east in 1993 and began building a hub at Baltimore-Washington Airport.

These large, well-capitalized low-fare carriers were now financially prepared to bring reform to the complacent, high-cost industry. Then, the September 11, 2001 attacks permanently undercut the market situation that tolerated the high CASM’s of the legacy carriers.​

Below: Independence Air CRJ at ROC in 2005 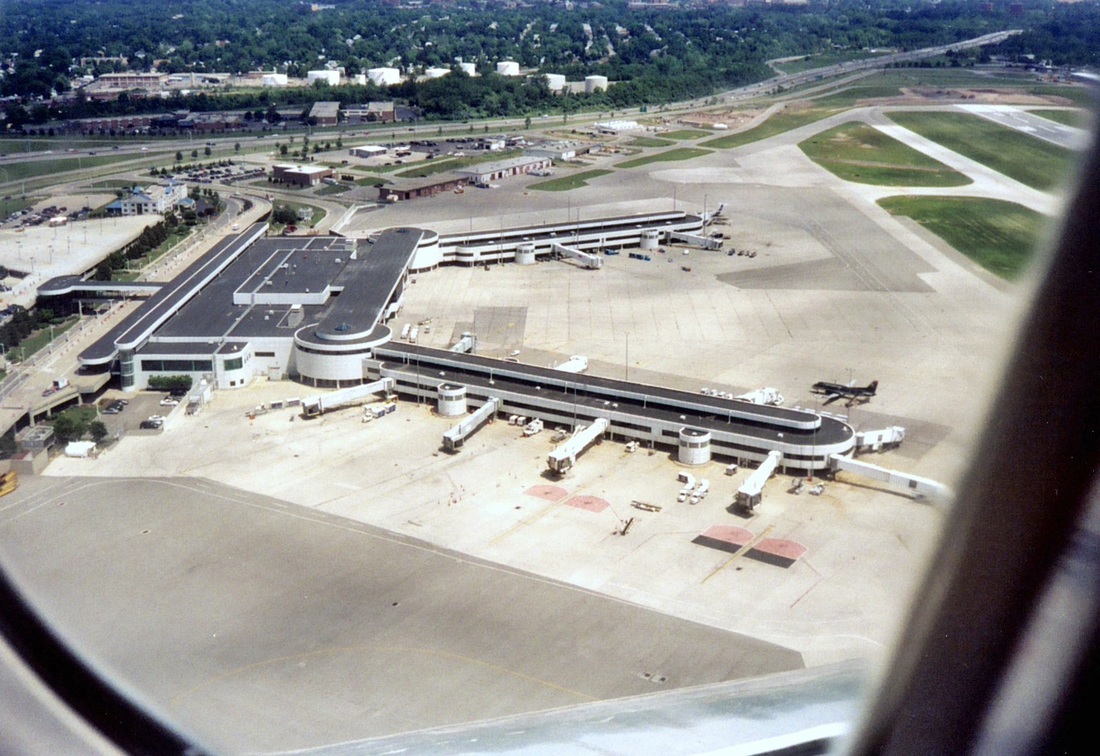 In the 2000’s, reform came to Rochester swiftly.  In October 2000, JetBlue entered with flights to JFK with their seat-TV-equipped Airbus A320’s. AirTran Airways began building a careful “complement hub” at Baltimore to serve Florida and markets that 800-lb gorilla Southwest did not serve. AirTran entered Rochester in March 2002 with flights on Boeing 717’s to Baltimore and its Atlanta base, and added nonstops to Florida as well. Air Tran started with a gate subleased from United and later moved to two USAir gates, B2 and B4.​ 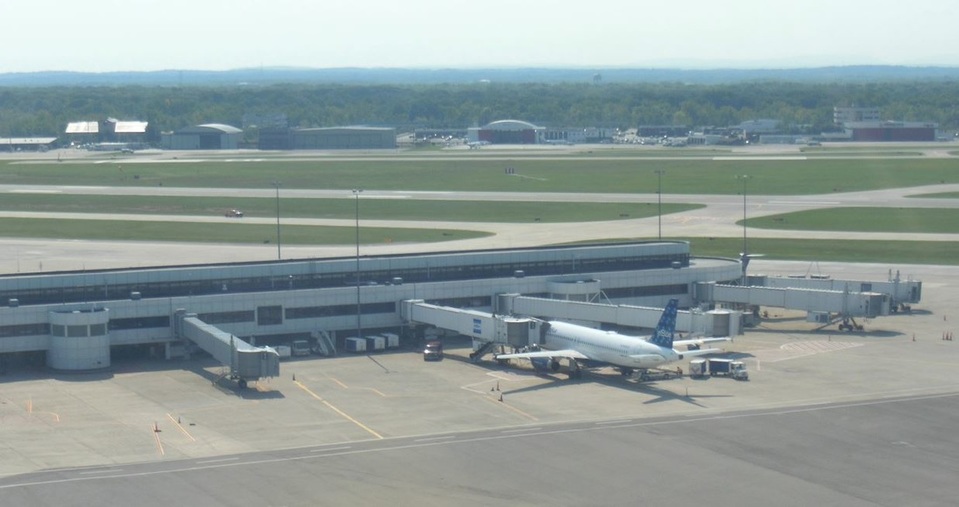 Enplanements rose again in Rochester reaching 2.9 million in 2007. But market changes continued to happen. The financial crisis of 2008 undercut the healthier economy of the mid-2000’s. Legacy carriers also went through bankruptcies in the 2000’s to restructure themselves. By 2010, they had narrowed the CASM gap with the low-fare carriers. Meanwhile, as the low-fare carriers grew, they entered more congested airports, and their employee groups got more seniority, inching their costs upward.

In a happy development, FedEx in 2001 introduced Rochester’s first scheduled widebodies since 1973, using Airbus A310’s. Since then, FedEx has also operated A300’s, McDonnell-Douglas DC-10’s, and Boeing 767-300 and 757-200’s to Rochester, offering spotters a regular diet of widebodies. Flights go to FedEx’s Memphis hub or to other spoke markets, or New York-Kennedy or Newark. Air Canada entered Rochester with turboprop flights to the airline’s Toronto Pearson International Airport superhub.
Above: FedEx DC-10 at ROC in March 2013.
Early 2010’s: Back to the Future: Fuel Costs, and Consolidation Redux.  The 2008 fuel-cost crisis hastened the desire of legacy carriers to attempt another round of consolidation. Unfortunately for consumers and medium- and small-size markets such as Rochester, the Bush and Obama Administrations approved a series of mergers that reduced the eight largest carriers (the legacies, Southwest, and AirTran) to four.

Delta bought Northwest, United bought Continental, American bought US Airways, and Southwest bought AirTran. American moved to US Airways’ gates, Delta moved to American’s old gates and kept Northwest’s. Southwest took over AirTran’s two gates plus an old Delta gate, B1. The most pronounced change for Rochester was AirTran’s being absorbed by much higher-cost Southwest, whose costs had risen significantly as oil hedges expired and the route system became more enmeshed in major airports. 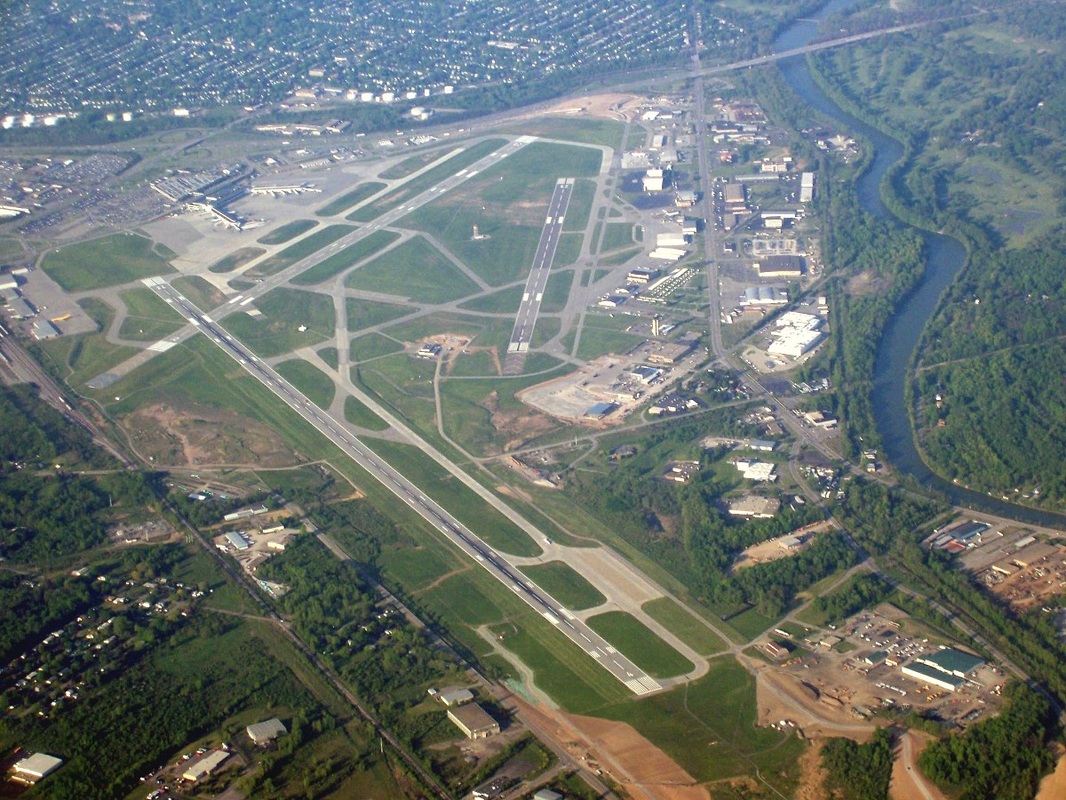 As might be expected, the market responded to the new higher-fare situation. New “ultra low cost carriers” (ULCC’s) such as Allegiant, Spirit, and Frontier grew in the USA, prospering by offering ‘bare fare’ sub-weekly nonstop services direct from medium and small-size markets to sunspots such as Orlando, Fort Lauderdale, and Phoenix.  But these carriers do not offer connections. In 2015, Allegiant entered Rochester with nonstops each to Orlando-Sanford and Fort Lauderdale. Later, Allegiant ended Fort Lauderdale and began service to Punta Gorda (near Fort Myers). 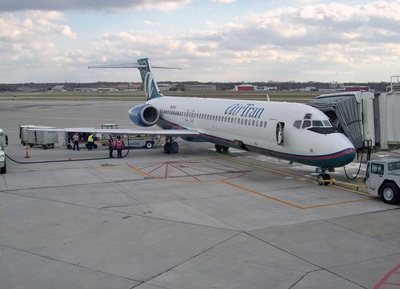 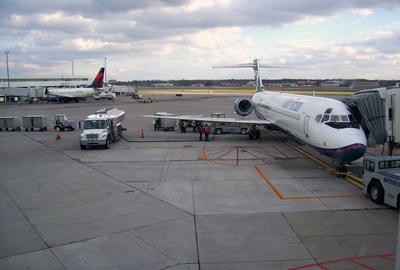 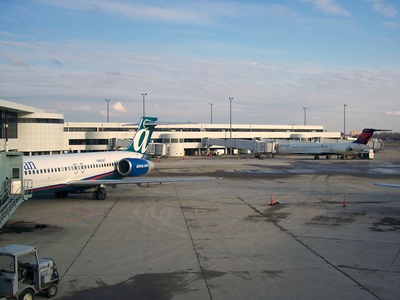 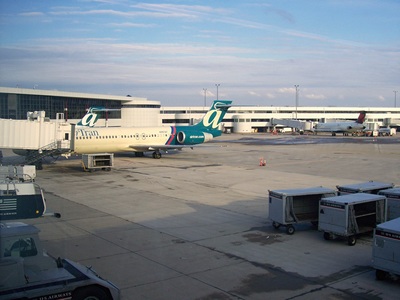 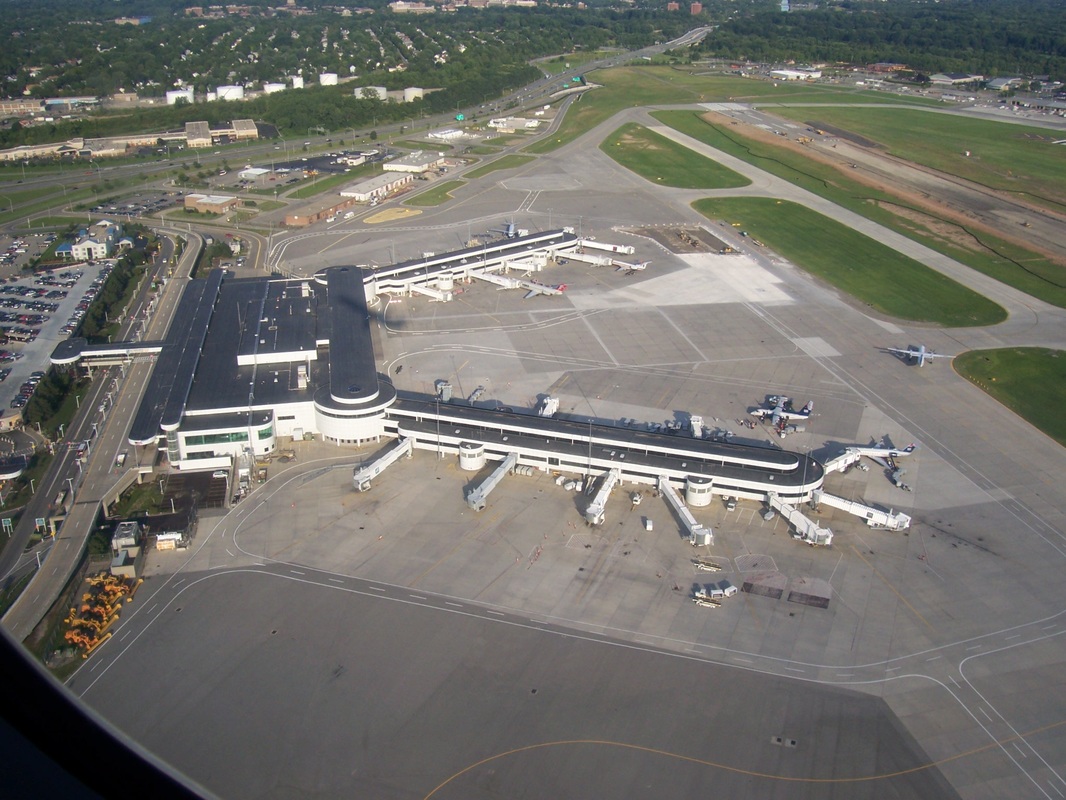 Above: Rochester in August 2008

By 2010, Rochester was well into the kind of economic restructuring pain that its neighbors Buffalo and Syracuse had experienced in the 1980’s. Rochester’s large manufacturing employers shrank, and the University of Rochester and its teaching hospital became Monroe County’s largest employer.  High fuel costs ended Rochester’s two longest flights: nonstops by American to its Dallas-Fort Worth hub (about 2005-2007) and AirTran to Las Vegas (2007).

The name of philanthropy in Rochester had been Eastman. Now it was Wegman or Golisano, referring to the successful Rochester-based Wegman-family-owned grocery chain Wegmans, and Paychex founder Thomas Golisano. Many small tech startups began, but a new age of contract-work and economic insecurity began. Remarkably, Rochester’s enplanements remained surprisingly strong, stagnating at round 2.4-2.5 million passengers a year since consolidation.​

Below: Rochester in March 2010 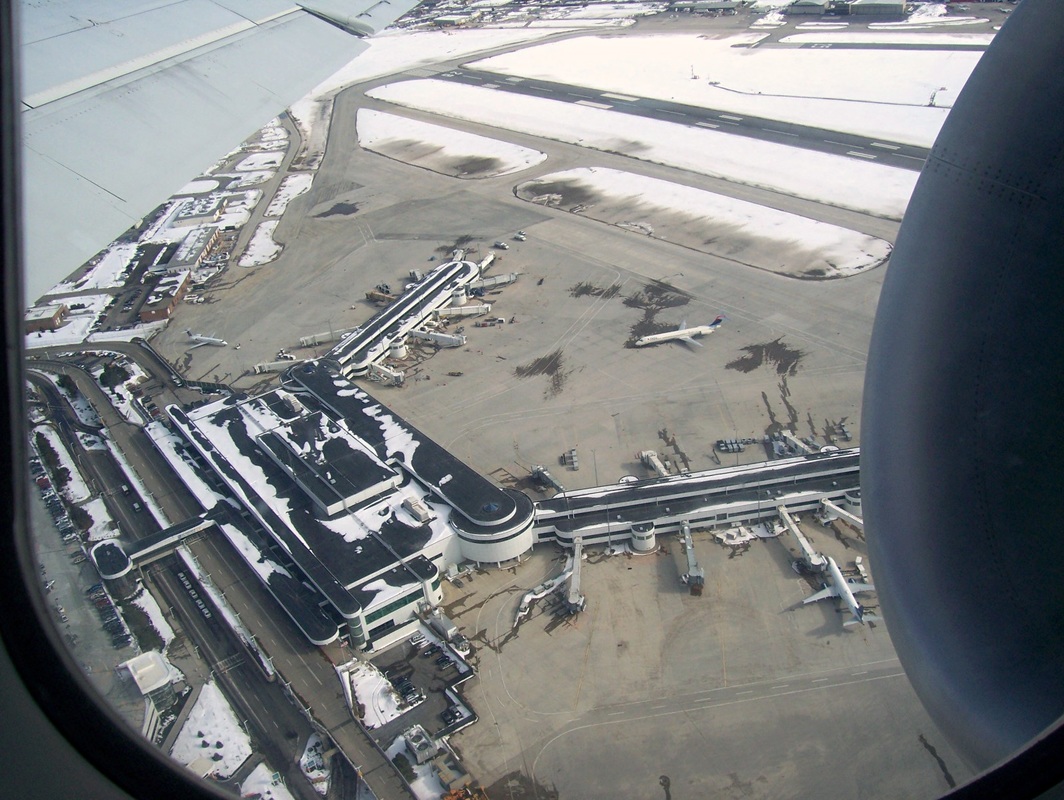 Small Airport Improvements. The airport saw some small improvement projects during the early 2010’s. In 2010, the two security checkpoints were consolidated into one for efficiency, and the parking garage was expanded. Because the new security checkpoint put the airport’s concession atrium and runway viewing areas behind security, Monroe County graciously moved the airport’s administrative offices to build a landside viewing atrium outside security on the terminal’s west side. The airport’s already excellent airfield viewing became even better.

The airport’s tight 5,500’ crosswind runway 10-28 was lengthened to 6,400, plus an engineered material arrestor system (EMAS) was added at the 10 (west) end. New taxiways were built, easing aircraft access around the field. The 1992 terminal, while overbuilt, proved a successful, adaptable facility that met air travel needs well. 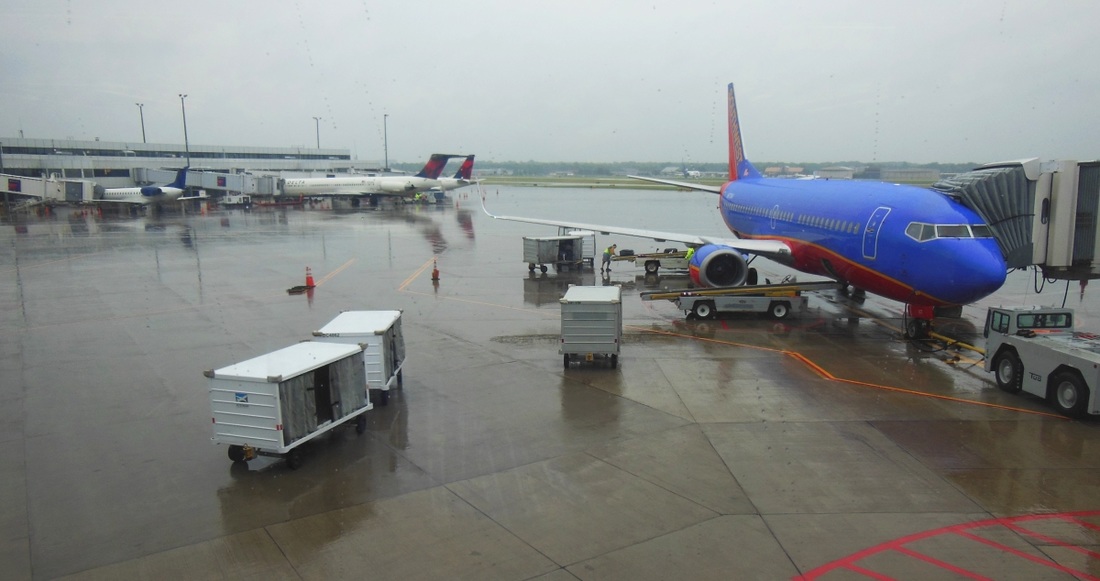 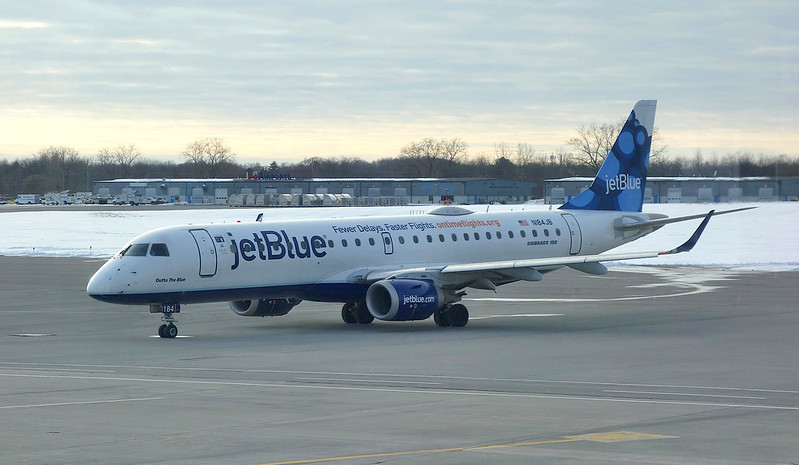 Smaller regional jets in Rochester were often replaced by larger 70-90 seat Canadair and Embraer jets. All legacies maintain “mainline” jets at Rochester, though American does so only seasonally (fall-spring months to the Charlotte, NC hub).

Given the unhappy competitive state of the United States airline industry, Rochester entered 2016 with a relatively good service mix for a market its size. Legacies American, Delta and United maintained services to their surviving regional hubs as well as key business markets such as New York, Boston, Philadelphia, and Washington. Southwest and JetBlue kept a “mainline low-fare” presence with good connections at their respective BWI and JFK hubs. Allegiant brought a new ULCC option to favorite Rochester sun spots, and Air Canada maintained international connection to Canada and Air Canada’s massive Toronto hub. 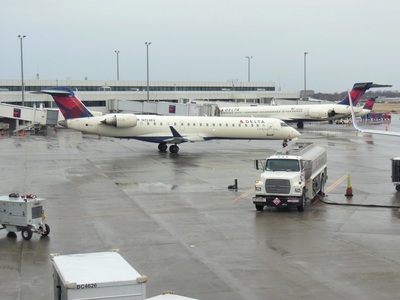 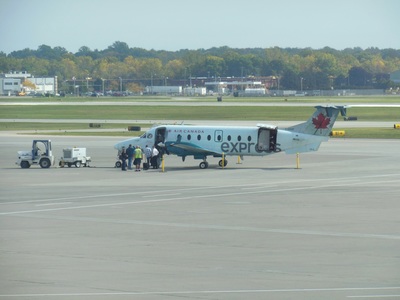 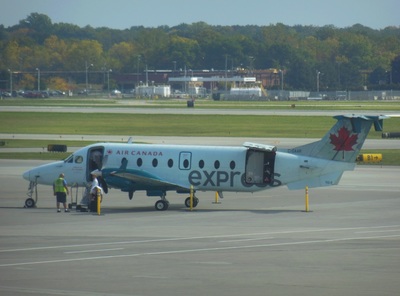 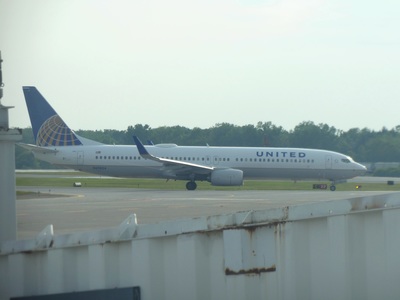 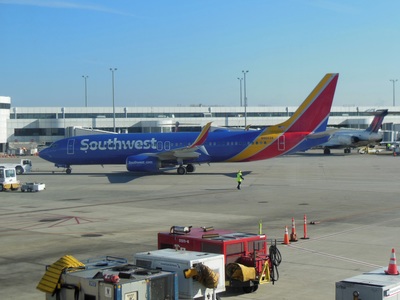 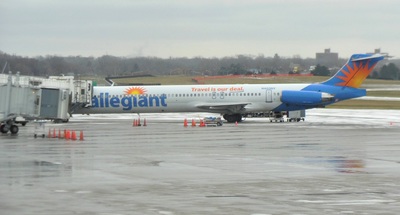 ​In Rochester, then-Monroe County Executive Cheryl Dinolfo submitted an application and received the maximum $40 million. Monroe County also got a $4 million Federal grant. The County planned a $54 million renovation and upgrade of the airport terminal including a roadway canopy, security-checkpoint renovation and expansion, additions to the east and west ends of the concessions atrium, additional concessions and new play areas in the rotundas, cosmetic upgrades in the concourses, additional electrical outlets and counter space for laptop use, and installation of ‘smart technology’ like color-coded lighting for the hearing-impaired.
But in September 2017, the County asked the county legislature for $25 million more and would not explain due to “security reasons.” The money apparently was at least in part for what turned out to be facial-recognition cameras and technology on the canopy. The terminal now has 100 cameras, including eight with facial-recognition capability. The project now would cost a total of $79 million.
The construction took place over 18 months, ending in October 2018. The most striking feature is the curvy white stretched-cloth roadway canopy, which can be lighted different colors. The security checkpoint was expanded and a new central exit escalator down to the arrivals area, and a fountain-sculpture with a downtown-Rochester theme built. Jagged corner expansions to the concessions atrium over the apron added seating, but do not appear to affect aircraft parking. 1,000 new electrical outlets were added post-security. 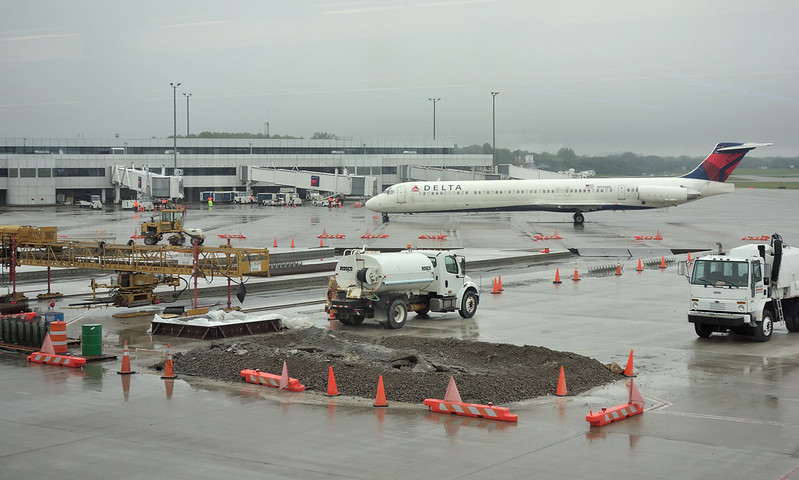 ​Oddly, and unhappily, the county moved the newsstand into the middle of the atrium, blocking a significant portion of the beautiful apron view with…..magazines. The county removed the historic former Midtown Plaza ‘Clock of Nations’ to make way for the newsstand. 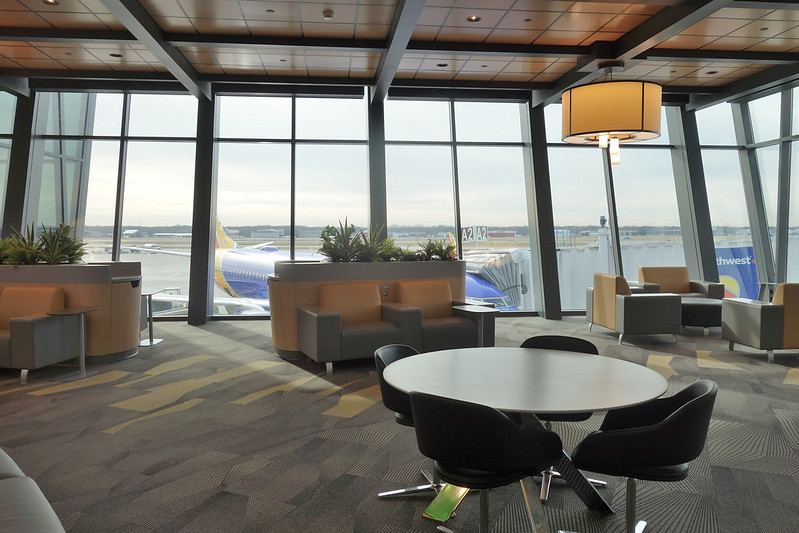 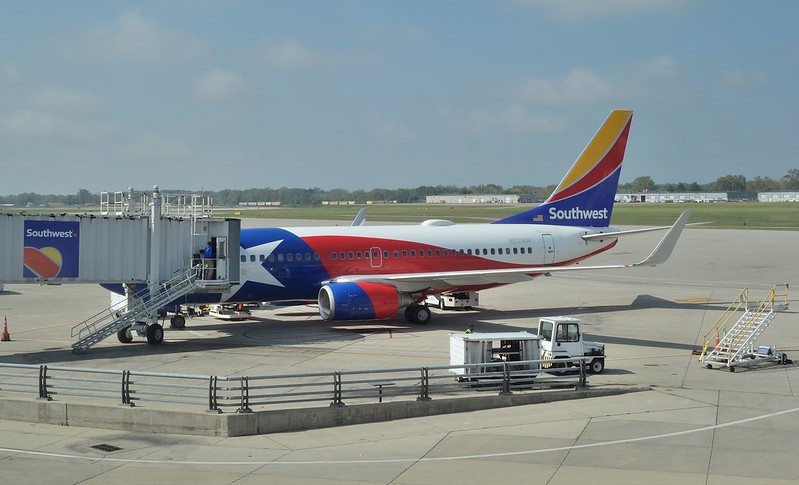 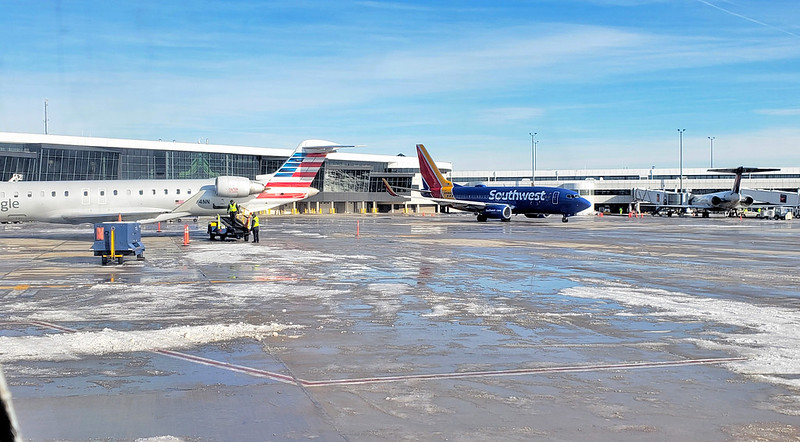