Text and airport plans by James C. Kruggel Ph.D. (aka BWI-ROCman from DAC)
Primary Sources: City of Rochester and Monroe County documents, and the Rochester Times-Union and Democrat and Chronicle 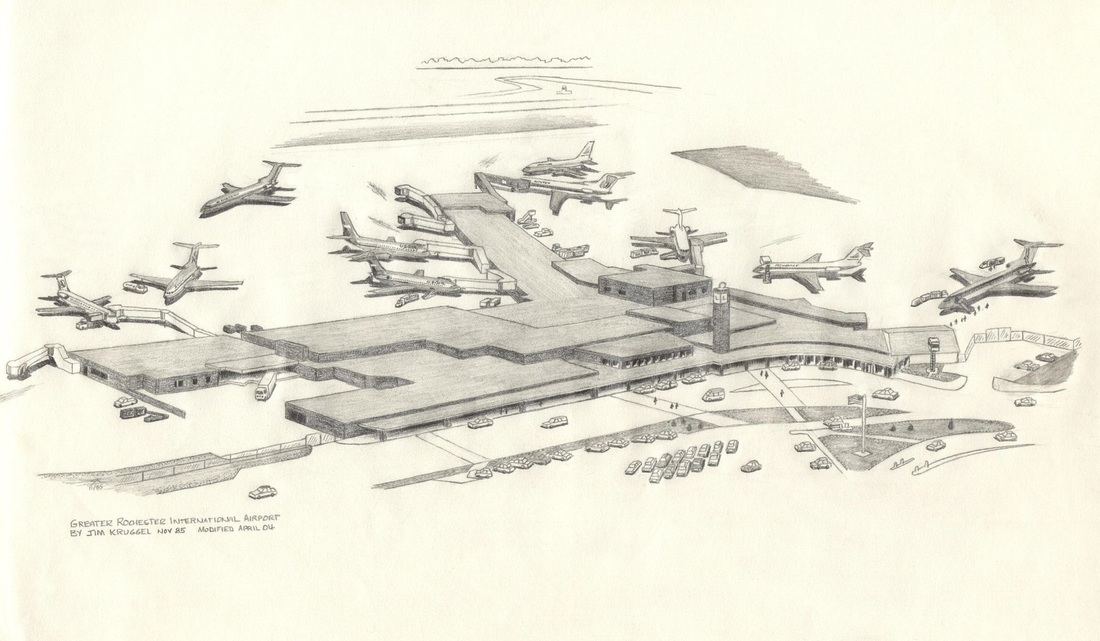 Above: Rochester International as it was in November 1985
Introduction. Rochester, New York was settled in the late 1700’s and incorporated in 1834. The city grew and prospered along the new Erie Canal, part of a water ‘superhighway’ from New York City to developing Western New York State. Rochester’s economy was first built upon waterfall-fueled mills and canal trade. But it was image-related manufacturing that would power Rochester through the 20th Century. In 1880, inventor George Eastman founded Kodak, which became the world’s largest consumer photography company. Eastman poured his wealth into philanthropy, giving Rochester exceptional cultural endowments for a city its size.
By the mid 20th century, document giant Xerox and vision giant Bausch and Lomb had been founded in Rochester. Medical-equipment and car-parts manufacturing, and other  technology companies, helped build Rochester’s white-collar culture further.  What was once the “Flour City” became the “Flower City” with beautiful gardens such as Highland Park.  A 1990’s economic-development slogan described Rochester as “The World’s Image Centre.”
Founding of the Airport to the 1940’s. What is now Greater Rochester International Airport was founded in 1919 on land just four miles southwest of the city center, in the townships of Chili (pronounced CHAI-lye) and Gates. The city bought the field in 1921 and named it Britton Field.  Air mail service began in 1924, and passenger air service began in 1927. In 1928 the airport was renamed Rochester Municipal Airport. A few hangars and a snowflake-pattern of runways were built. The airport served general aviation as well as passenger and mail service. Monroe County acquired the airport from the City of Rochester.
1950’s: New Terminal, Rapid Growth. In the 1950’s, Rochester and growing suburbs in Monroe County prospered. The rapidly growing airline industry connected Rochester to other cities from Chicago to New York, Washington, and Boston, in ‘milk-run’ style service that often landed in neighboring cities. American, Mohawk, and Capital airlines offered service in Rochester on a variety of twin- and four-engined propliners. In 1953, the city opened a new one-level red-brick terminal with a clock tower, accessed from Brooks Avenue the north side of the airfield. A bright glass concourse faced the airfield, and passengers walked out to their planes from this area. A curved apron faced the airport’s east-west runway.
1960’s: Terminal and Runway Expansion, and the Jet Age. In the early 1960s, the jet age dawned and Rochester’s prosperity continued. In 1962, Monroe County opened the first of two large expansions to the terminal.  A gate concourse and baggage claim for American Airlines were built on the east end, along with a new kitchen, along with new ticketing and baggage areas for United (who had bought Capital in 1961). In 1963, the county completed an angled gate concourse on the west end. Jet service to Rochester began in January 1965, when American introduced the Boeing 727-100 in the carrier’s classic “AstroJet” livery.

The existing runways were too short to easily serve jets. In 1967, a new runway angled to the southwest into the town of Chili was built. The runway was lengthened to its current 8,002’ in 1969. This runway allowed American Airlines to land larger 707 jets.
1970’s: Prosperity and Stability. By 1970, American served Rochester with 707’s and 727’s. Mohawk flew BAC-111’s and prop planes in a smart ‘Indian head’ livery.  United used Boeing 727’s and 737’s. In 1972-1973, American briefly offered Rochester’s only scheduled passenger jumbo-jet service, on DC-10’s to Chicago, Cleveland, Syracuse, and New York-LaGuardia.  In 1972, Washington National Airport-based “local-service” carrier Allegheny Airlines bought Mohawk.

Allegheny subsequently introduced DC-9 jet service to Rochester on regional routes such as New York and Boston. Rochester’s 1970’s apron was populated with Allegheny’s subdued ‘checkmark’ livery, American’s classic 1968 “A eagle A” livery, and United’s new Saul Bass Tulip livery that began to replace the variations of the prior Mainliner and Blue-star livery.
Rochester remained prosperous in the 1970s, but Monroe County built only conservative, incremental expansions to the airport terminal. In 1977, Allegheny built a $1.3 million expansion that included gate areas along its (east) side of the angled gate concourse, plus two jetways. In 1978, United approved a $2.5 million expansion plan for its gate and baggage areas. Two gate areas, each with a jetway, were constructed, being completed about 1980. Around this time, a small second floor for airport offices was built between the United ticket counters and the gate concourse.
1978: The Deregulation Watershed. The United States deregulated fares and routes in 1978, bringing tumultuous changes to the industry. Airlines could now add or drop interstate routes, and set fares, without government approval. Larger “trunk” carriers dropped many regional routes at medium- and –smaller sized markets such as Rochester. These carriers instead concentrated on developing new, efficient connecting hubs at major airports.
Smaller “local service” carriers experimented with hubs of their own, sometimes keeping and sometimes dropping regional routes.  Many new airlines were founded, roiling the industry with their lower costs, and usually lasting a short time. Cities suddenly had two and three times as many airlines. Signs, gate assignments, and ticket counters changed rapidly as new airlines started and folded. 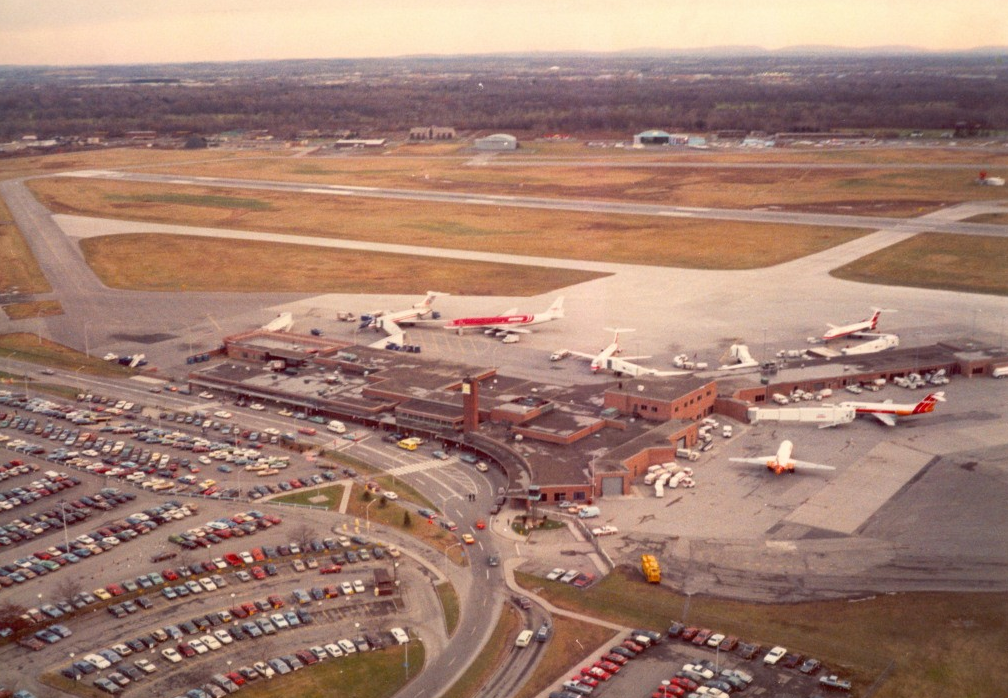 Above: ROC's 1953 terminal as it appeared in late 1984. American, Emery, US Air and Empire Airlines planes are visible.
Rochester was swiftly impacted. American and United dropped most regional routes and concentrated on flights to developing hubs in Chicago. Allegheny grew to be the airport’s largest carrier, retaining most regional flights.

Rochester’s technological economy insulated it somewhat from the beginning national economic de-industrialization and move towards an ‘information and service’ economy. But traffic stagnated at the Rochester-Monroe County Airport, possibly due to Rochester’s conservative financial culture and the cost structures of the dominant pre-Deregulation carriers.
1980’s: Airline Turbulence: New Entrants, Restructuring, and Rapid Growth. Trunk carrier Eastern entered Rochester in 1979. Eastern took over United’s old route to Atlanta, where Eastern was developing a powerhouse hub. North Carolina-based local-service carrier Piedmont and Minnesota-based local service carrier Republic (itself a combination of three pre-Deregulation local service carriers) entered in 1984. They offered service to hubs in Baltimore and Detroit, respectively. Allegheny renamed itself USAir in 1979, seeking a more national image for the Deregulation era. 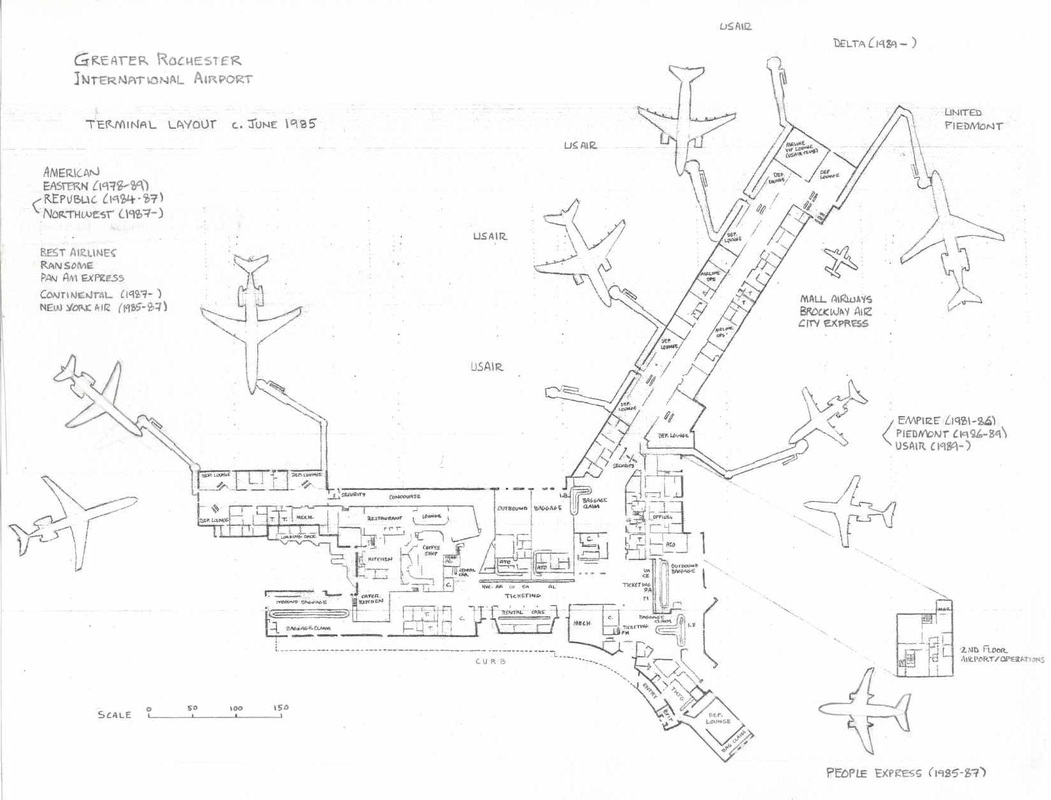 Later 1980’s: Terminal Replacement, NYANG Base, and New Cargo Terminal. By the mid-1980’s the terminal was outgrown. In the 1980’s, only minimal additions to the 1977-1980 expansions were built. American now had two jetways on its 1962 concourse; USAir went up to three and then four on its concourse. USAir also built a small rectangular expansion to the end of the concourse for a USAir Club, as paid-membership airline business-lounges became popular in the 1980’s. In 1982, the current air traffic control tower was built on the south side of the airport.

Empire or Piedmont added a second jetway to the closer-in United gate area, which Empire had taken over in the early 1980’s as United shrank its service at Rochester. A small shed-like wooden expansion was added to the northwest corner of the terminal building for gate and baggage-claim space for People Express. Passengers walked across the apron to 737 or 727 aircraft. The main ticket counter was extended on the west end for Republic, and on the east end for USAir.
The County considered several options for terminal expansion. In 1987, the County was close to settling on a complex renovation-expansion that would have included a baggage claim area across the road with second-level bridges from the terminal, and a tunnel for baggage tugs, similar to what was built at Milwaukee General Mitchell Airport (MKE). There would have been a garage with an attached hotel. This design was rejected amid questions about costs and contracts.
In 1988, Monroe County approved a $109 million new 22-gate two-story terminal and a parking garage. This new design featured a two-level approach road and three-story garage, a light-gray metal-spandrel exterior, a vast concessions atrium, curtain-wall windows throughout, and two angled 11-gate two-story concourses. It has around 2.5 times the floor space of the terminal it replaced.

​The new terminal was built in stages upon the existing terminal site, using a series of temporary prefabricated buildings to accommodate passengers during construction and demolition. It was completed in 1992. 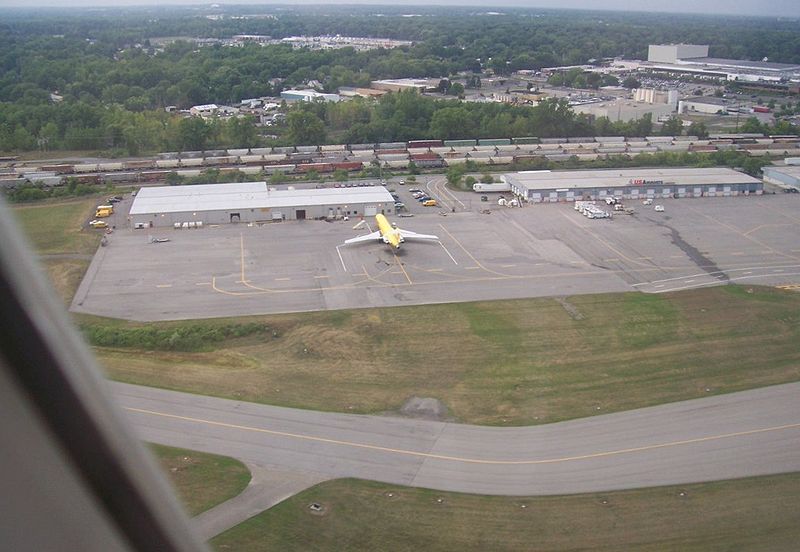 At about this time, the New York Air National Guard (NYANG) opened a helicopter base on the airport’s south side, which would be expanded in subsequent decades.  The airport has seen operations by NYANG’s massive C-5 cargo aircraft.
End of the 1980’s: Consolidation and Stagnation with High Fares. Rochester was still prosperous in the late 1980’s. But Kodak, like other US corporate giants, had become complacent, and had to slim down in the face of foreign competition. Rochester’s economy nevertheless remained largely sound. Meanwhile, airline managements, wanting stability and profitability, began working to tame the turmoil of Deregulation.

Led by CEO’s such as American’s Bob Crandall, Republic’s Stephen Wolf, and Continental-Texas Air’s controversial Frank Lorenzo, the airline industry consolidated between 1986 and 1989. The result was six “legacy” carriers: American, United, Delta, Continental, Northwest, and USAir. People Express destroyed itself by over-expanding, and it was bought by higher-cost Continental in 1987.

Gates and counters were rebranded. USAir remained dominant in Rochester, having bought Piedmont in 1986, and took over its gate area. Northwest bought Republic. Continental bought failed PeoplExpress. Delta replaced failing Eastern at Rochester in 1989, taking over the Atlanta route, and starting service to a new hub in Cincinnati. Eastern had used American gates; Delta parked by United. Continental moved from the People Express “shed” to American’s ticket, gate, and baggage areas, and the shed was removed.

Delta Air Lines Boeing 727-200 arrives at Greater Rochester, NY International Airport from Atlanta Hartsfield-Jackson Airport in September 2002. Still wearing her 1980s colours. JKruggel / CC BY-SA (https://creativecommons.org/licenses/by-sa/3.0)
At the end of the 1980’s, Rochester was served by a mix of 150-seat and smaller aircraft: 727’s, and many Boeing 737’s of original and classic series, plus DC-9 and new MD-80 series aircraft. The 1980’s had been a spotter’s delight for liveries and types, including a cornucopia of hybrids by Northwest and USAir in particular. And at least one Northwest Orient 727-100, still wearing the carrier’s former title, even made it over from Detroit.
By 1990, six carriers dominated. A new era of high fares and stagnant enplanements began for medium- and small-size USA markets such as Rochester. An exception was those markets—not including Rochester--served by quiet but wily Texas-based low-fare carrier Southwest Airlines.
GO HERE TO READ PART 2