The intention of this page is to describe and show all the Northeast Airlines liveries from 1940, when Boston-Maine Airways was renamed, until the takeover by Delta in 1972. Schemes prior to 1940 are not covered.
1941-1942: FLYING PILGRIM

1942-1945: ARMY AIR FORCE
During the war years Northeast did sterling work flying in the Arctic pioneering service to Scotland from Boston by way of Gander and Iceland. The fleet was repainted into Air Force colours but kept there script-like Northeast Airlines titles. For images of a typical wartime Northeast DC-3 see here.
1945-1958: WINGED PILGRIM
Around 1952 Western, as with most US airlines, adopted a white crown to the scheme. This was worn by the first DC-6Bs that arrived that year as well as the DC-3s, DC-4s and Convairs.
1958-1960: UPDATED PILGRIM
In 1958 Western began advertising using their famous Wallybird character. I believe he was meant to be an owl, but he looks more like a parrot to me. He never appeared on the aircraft but was a major factor in Western's ad campaigns. The shots below are from 1960s campaigns:
1960-1966: ARROW TAIL PILGRIM
Northeast's jet-age scheme was a relatively minor modification of the one worn by the DC-6s. The colours remained a deep blue with red titles but the standard dual cheatline was altered into a TWA-esque arrow (probably due to the Howard Hughes connection). On the tail the three double stripes were reversed and made into arrows.
There were several minor title combinations. The first six Convair 880s had 880 in large titles on the tail. The replacement batch of four that arrived from October 1962 instead wore SuperJet titles in the same place. The first pair of 727-95s, which arrived in October and December 1965 respectively, had no special titles and were the only 727s to wear the pre-Yellowbird scheme.
1966-1970: YELLOWBIRD 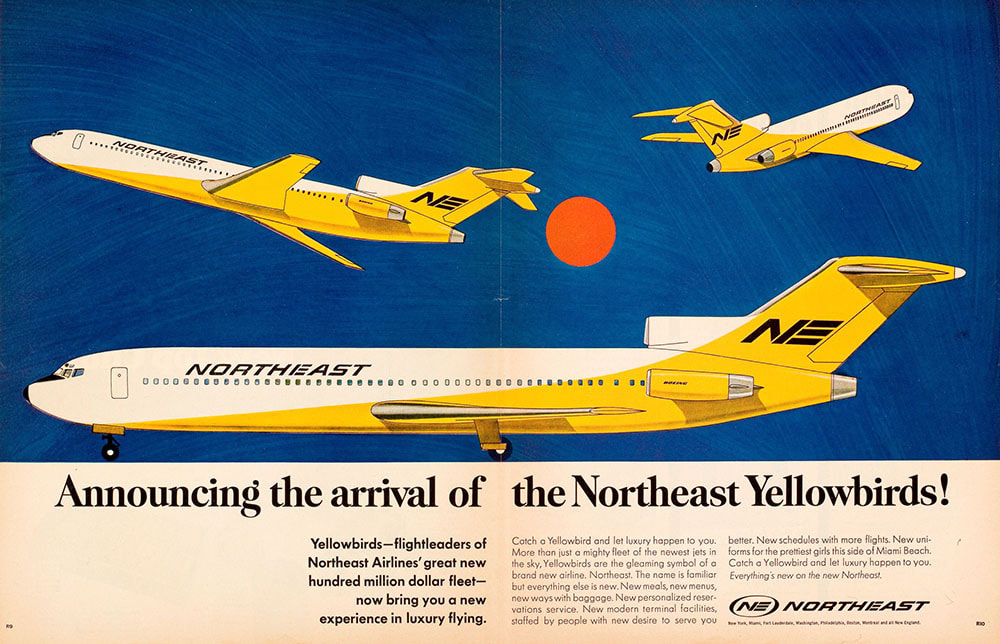 1970-1972: YELLOWBIRD 2
1972: DELTA TAKEOVER
The last modification to the Yellowbird was the addition of a small Delta widget logo on the forward fuselage once the takeover was underway. Northeast officially became part of Delta on August 1, 1972.