Early Type 2 A300s
The Airbus A300 was one of the moulds that Schabak inherited from Schuco, who had released only a small number of models on it. The original mould was quickly modified into a single piece version of the original and A300s would be produced on variations of this mould throughout the history of Schabaks. The mould is one of Schabaks less impressive efforts and the changes they made to it didn't necessarily improve it either. The mould's most unique feature is the rather ducklike beak style of the nosecone.
Below: A lineage of 5 distinct Air France A300s from the type 1 on the left through to a silver windowed type 3 at the rear right.

Type 1 A300s
The original type 1 A300 is something of an odd mould as it has 3 components. The nosegear leg is made of plastic and slotted into a hole. It is rather short and so the model has a nose-down attitude. The tail is also a separate piece with a wedge that fits into the fuselage roof. The engine pylons and maingear are classic early Schabak style. The fuselage shape is not great and has the duck-like beak at the nose. As you can see by the Blu-tak holding the maingear this mould is a classic tail-sitter as the nosegear is too light for the rear half of the fuselage.

This is one of the worst Schabak moulds and thankfully it wasn't used very much before it was replaced. In fact, there were only 6 models made using it, two of which are Lufthansa versions. The only airline not visible in the above shot is a Hapag Lloyd version.

Type 1 A300 Mould
TYPE 2: 1984-1990
The updated Airbus A300 mould merged the three separate components of the original mould into one. This was a definite improvement in terms of the tail and nosegear but there was no other changes and so the problem with the shape of the nose region was not resolved. The original 2a version had the trademark 1980s large silver wheels as below:

Type 2a A300 mould
During 1989 the rolling gears where replaced with the later standard small non-rolling gears producing a more model-like A300 (2b). Sometimes the tyres were silver but that period was brief and mostly they were the later standard black. I actually like this version the most although it does tend to tower slightly over other similar sized Schabaks.

Type 2b A300 mould
Type 3: 1990-2006
The last version of the A300 mould was a modification of the type 2 to shorten the landing gear. This did resolve the height issue vis a vis other Schabaks but left the mould looking rather odd (there is a similar problem comparing the long-legged A330 with the short-legged A340 mould). The maingear was also shortened too much so that the model now had a rather tail-down attitude. As with most Schabak decals the black windows were replaced gradually with silver versions.

This mould was used only once during the Schuco Schabak era for a Tunisair A300.
PRODUCTION
Below is the total list of Schabak A300 production organised by airline number. Ids relate to the DiMA database. 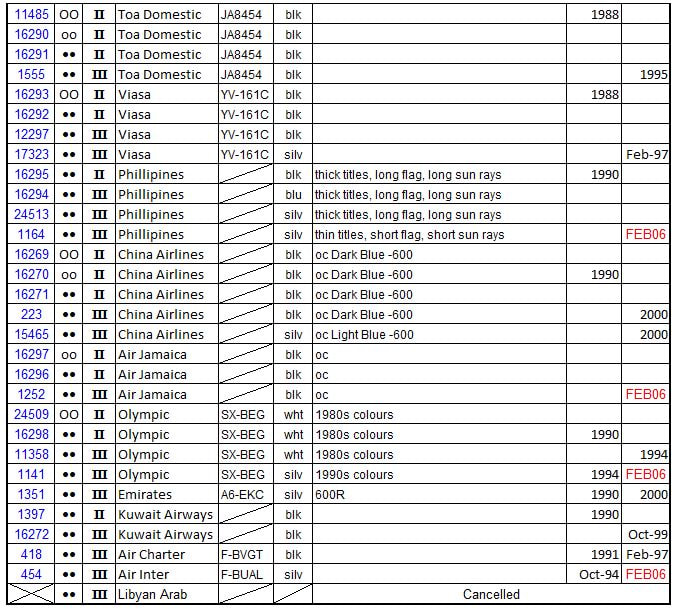 The A300 mould wasn't used for any totally new Schabaks after 1994 but at least 13 versons continued into production until the end of Schabak production. The below Olympic and American A300s are two of the latest A300s:
The A300 is far from my favourite Schabak mould but nonetheless they used it to produce a wide range of colourful airliners. Below are a selection of later A300 versions: