The Boeing 727 solidified Boeing's place as the world's primary source of civil airliners and the short series 100 was the platform that propelled the larger series 200 to be the globe's most important jet for several decades, until it was surpassed by the 737 in the 1990s. The result of the joint requirements of Eastern, United and American the 727 benefited from Boeing's trip to see De Havilland's progress on its Trident, but not bogged down by BEA's hopelessly blinkered requirements Boeing was able to create a much superior jet. Indeed it was the first true medium range jetliner and with its exceptional high-lift wing it was able to operate into a wide range of airports - many which had until then not seen jets. A total of 572 727-100s were built and delivered between 1963 and 1972 with the type seeing service with the US trunks into the 1990s and throughout the rest of the world into the 2000s.

The short 727 has been reasonably well represented in this scale but mainly due to the efforts of Aeroclassics. Indeed they have made almost 3/4 of the models for the type as of August 2016. This isn't entirely surprising as unlike its larger sister the series 200 the short 727s were almost all out of mainline US trunk service by the mid-1990s and so missed the beginning of 1/400 manufacturing and the majority of Gemini's retro-friendly release period too. There have been 5 moulds built but most have seen little usage. As you can see there has been some mould sharing: 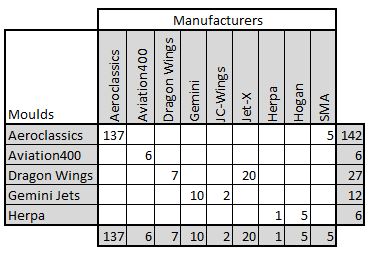 Before we get to the moulds as usual we'll start with a look at the real thing:
Dragon Wings Mould (2001)

As is often the case Dragon was first on the scene with a mould in this scale. It shares many of the features of the larger series 200 - indeed too many of the features! I am generally not too keen on the Dragon 727. Though the fuselage and nose shape is good as usual with most Dragon moulds it has the same failings - simple undercarriage, an obvious join between tail and fuselage, plastic wings plus in this case a seam under the wings (albeit a very small one). On some releaes the nosegear doesn't have a central hub which makes it look odd. The Dragon main gear is particularly bad. It sits too high, the gear doors are too long and its troublesome to position properly. The moulds biggest failing however is pretty grievous and that is it uses the same tail as the larger series 200 meaning that the series 100s diagnostic oval shaped no 2 engine intake is incorrectly round. That's a pretty major mistake. Dragon only used the mould 7 times but their partner at the time Jet-X used it 20 times for older US classics (mainly Braniff, United, American, PSA and Pan Am). If you can get over the engine and gear then the mould is a possibility but I would rather avoid it myself, which is a shame as most of the models made haven't been reproduced by anyone else.
Aeroclassics (2003)

In 2003 Aeroclassics released what is the definitive mould for the 727-100, if only because it has been used so many times in comparison to the others. If you collect classics it would be hard to avoid this mould unless you only get European airlines. It's a good mould so it certainly doesn't need to be avoided, however it isn't perfect. The undercarriage and nose shape are fine, however the wing seam rather ruins the wing/fuselage fairing in front of the wing and it sometimes looks a bit tubby in the area behind the wing. The tail top is uneven due to the fitment of the horizontal stabilisers and lastly the upward kink in the front of the tail is missing, whereas it is correctly there on the Dragon mould. Put the Aeroclassics gear, no 2 engine, metal wings and tail fuselage join on the Dragon mould and together there'd be a killer mould. Still I like the Aeroclassics mould just fine and own over 55 of them. The mould was also used by both Aurora and SMA in very small numbers for Delta and Air West releases respectively. The mould was last used back in 2014 and later versions have rolling gears. Hopefully is still about as there are plenty of models still to be made.
Aviation 400 (2008)

The Aviation 400 mould looks pretty good. It is seamless at the wing and horizontal stabiliser and the tail and no 2 engine look correctly shaped. The only criticisms I can level at it is that the nose sometimes seems too rounded and as with their series 200 the tail chord is incorrect. The rear edge is at the same angle as the front which is wrong for the 727. This is hardly a small problem but it's all a bit academic anyway as the mould only got used 6 times and is hard to find.
Hogan / Herpa (2009)

Hogan released several models for the Japanese market in 2009, however photos are hard to come by and though it looks ok I don't really have enough material to review it.
Gemini Jets (2009)

Gemini have produced 10 models using their Boeing 727-100 mould between 2009 and 2013. There were at the time well publicised issues with the angle of the horizontal stabilisers of most of them - especially the National Airlines version, which as I recall got quite heated on the forums as Gemini didn't accept criticism gracefully. The ten models are all, with the exception of the first (a Dan Air London example), from US airlines with no less than four of them being Alaska Airlines examples (showing the four Alaskana graphics schemes). The others have been from Trans Caribbean, National Airlines, Northwest Orient, Eastern Air Lines and Pan Am. Aside from the Alaska examples Gemini was careful to make sure that none of the models had been released previously by Aeroclassics. Though AC has done similar models of several it hasn't done exactly the same scheme variant.

Interestingly for the 727-100 it seems there are 5 passable moulds available all with their faults but none complete write-offs unless you find one of the faults too much. I doubt there will be anymore moulds for the type and it seems nowadays only Aeroclassics have any stomach for such vintage airliners, but hopefully there will at least be some new Aeroclassics 100s in the near future.