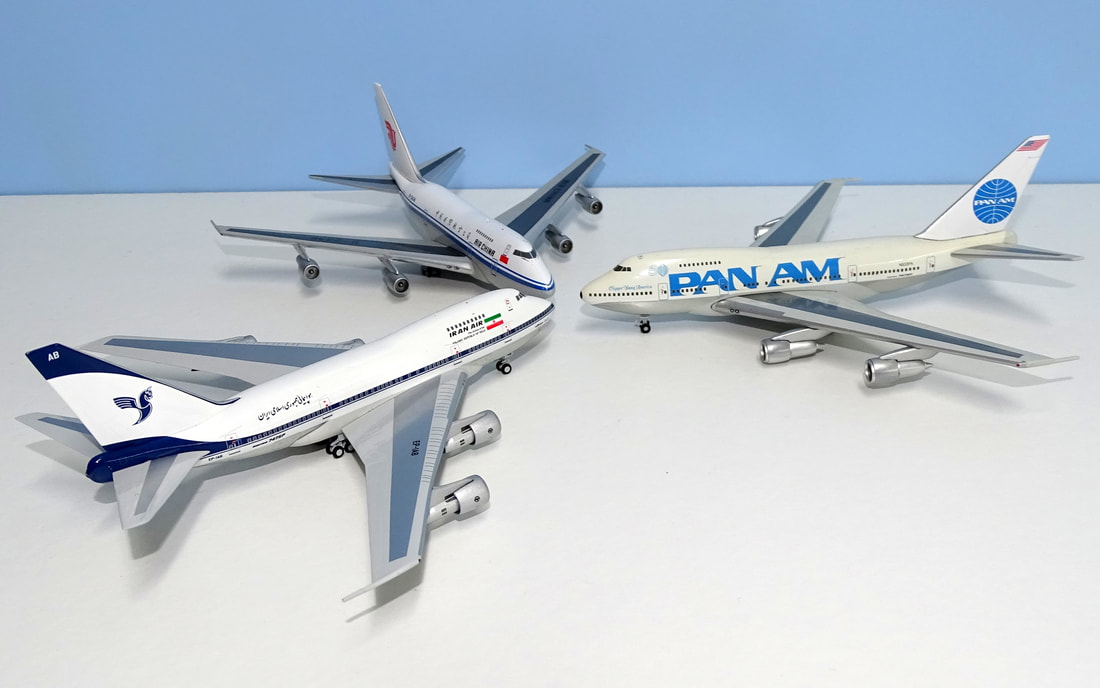 The 747SP had been something of an unimportant type in 400 scale, but the arrival of a new NG mould for it has changed that and the releases they have been producing have provoked a lot of discussion and analysis. The general consensus is that the NG is the best of the moulds but isn't faultless. In this detailed review I compare it to the older moulds and combine the analysis from various places to make a reasonably authoritative review for the type. 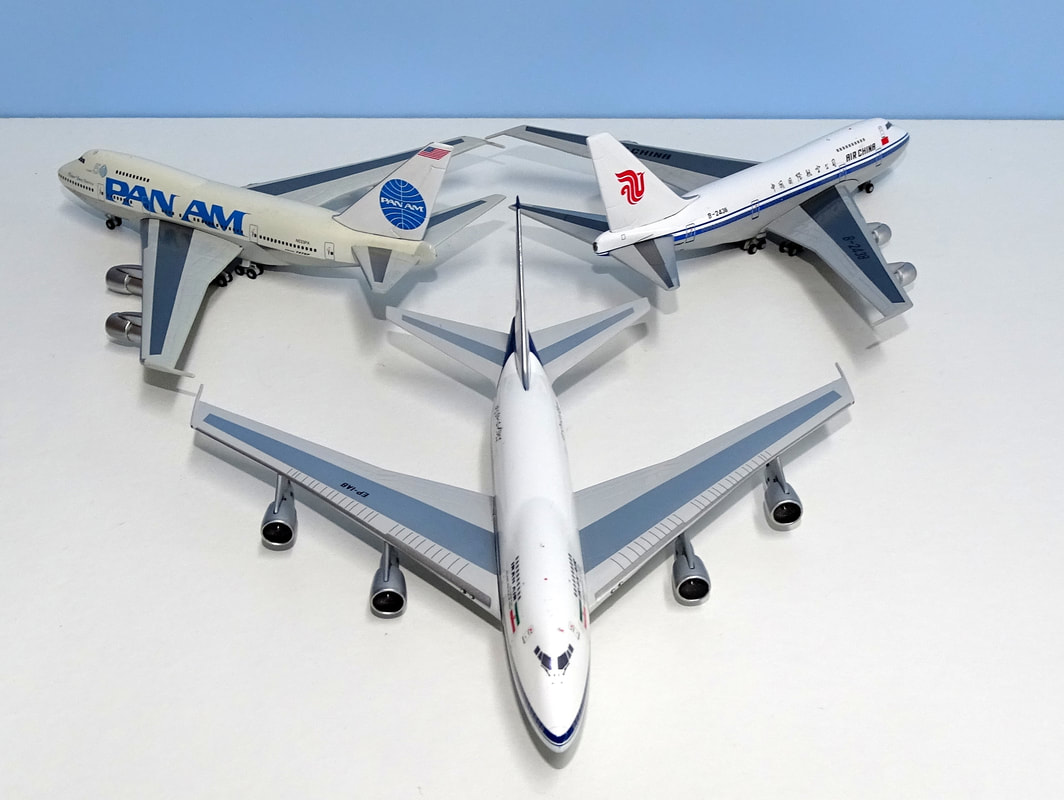 I want to thank various people for their contributions to the forums and groups on this topic. They include Denny Payne, Corey La Chance (IFlyHA), European Collector and Alex (Phantom II). I have tried to include aspects of your thoughts in the review. 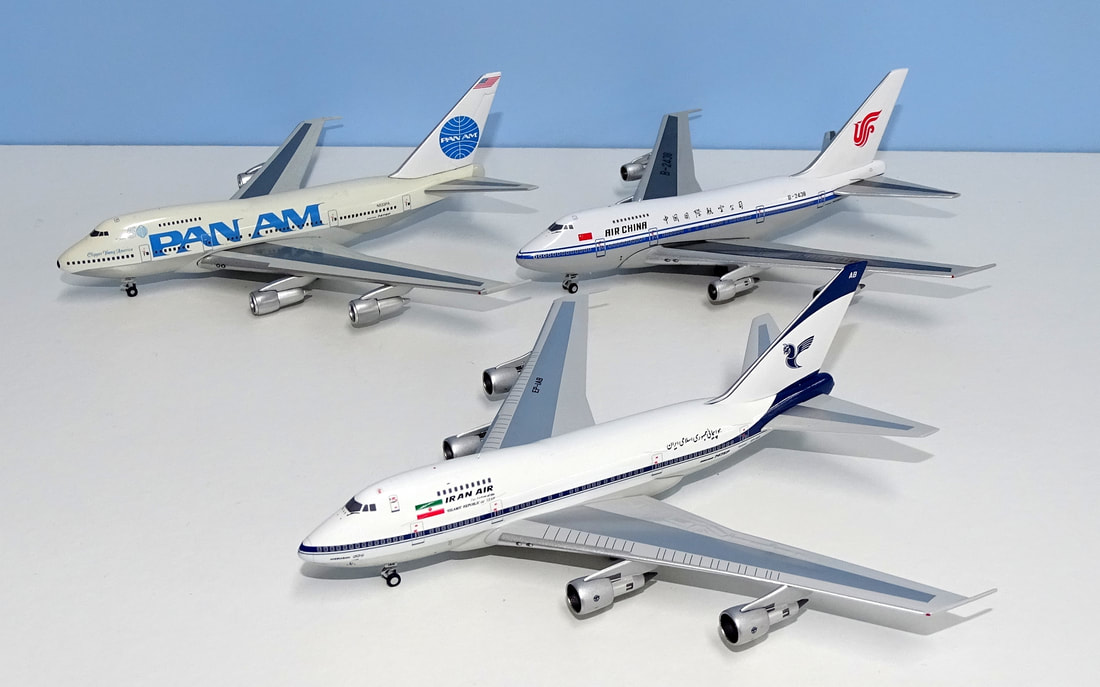 As discussed in my Boeing 747SP mould review there have now been 3 major moulds for the 747SP, although there have been at least 4 versions of the original Gemini mould.
The moulds to be compared in this detailed comparison will be the following:​
Here's a real 747SP for reference:

​The models to be used in this review are as follows:

Although there are RR powered model variants from Gemini and NG Models I'll leave them out as so few RR powered SPs were built. 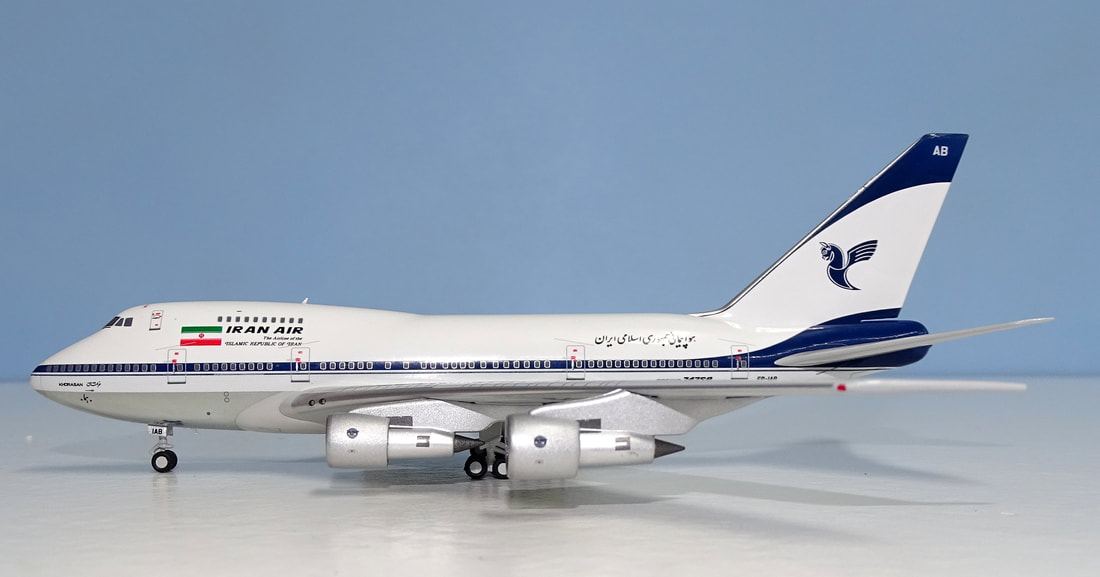 NGModels Mould
The review will take the form of a comparison of various areas of each mould to the real aircraft, with a score out of 5 allotted for each mould for each area. Adding the combined scores together gives you the winner.

​NOSE / NOSEGEAR
NOSE: This is without a shadow of a doubt the area that has caused the most discussion on the new NG mould, with several esteemed colleagues suggesting that the shape of the nose on the NG mould is inaccurate. Specifically there issue is with the steepness and curve of the underside of the nose, which it has been suggested isn't steep enough. This results in the windowline and cheatlines not meeting the nosecone at the correct place. The graphic below is courtesy of Alex (Phantom II) and shows how he thinks the nose profile could be improved. I agree that the area is not 100% correct on the NG mould, although in my opinion it is still pretty good.
NOSEGEAR: Herpa's landing gear is always very plasticky and rather simplistic. The forward process ahead of the tyre is much too large and the nosegear leg just a stalk otherwise. It doesn't have rolling gear. The modified Gemini nosegear is better but nowhere near as fine as the NG Models and the gear doors are too large. It's difficult to fault the NG nosegear, although this Iranian example demonstrates the regular QC issue of not having the detailed hubcap it ought to have. That's a QC issue though not a mould problem.
HUMP / WING FUSELAGE JOIN
HUMP: Looking at the images above it is fairly clear that the Gemini mould's hump does not angle correctly and is not curved enough. In fact, the line in places is almost diagonal and the distance between the upper deck windows and roofline is too small, especially in the area around the aerial. The hump shape of the Herpa and NG is good although the Herpa, being an older model, lacks the aerial. In terms of the aerials themselves this upper one is too erect and tall on the Gemini but perfect on the NG.
WING FUSELAGE JOIN: Gemini's mould dates from a time when only Dragon and Herpa were making seamless slot in wings moulds so has a cradle mount and accompanying seam line. The seam is too rounded to match the shape of the 747SP's fairing well but the wings angle out from the fuselage effectively. Herpa have made seamless moulds for a long time and so despite its age this Herpa 747SP has slot in wings. The moulding of the fairing is good but the wings are at a rather flat angle where they meet the fuselage. The NG Models 747SP is of course a modern mould with slot in wings and a very well shaped fairing. The wings attach very firmly with no obvious gap (as there is in the Herpa) and the wing angle out from the root is the best of the three.
ENGINES & PYLONS

ENGINE PYLONS: Once again the age of the Gemini mould plays against it here as the pylon / wing join is a well known weakness of the old Gemini 747s. Herpa has a better connection between the wing and pylon but for some reason its pylons are super thick and have a wide flat top to them. Both Gemini and Herpa have missed that the shape of the outer engine pylon is not the same as the inner. They have both mirrored the inner pylons on the outer wing and so they do not have the sigmoidal curve they ought to have. The under wing portions are also poor and lack the correct shape on both. The NG pylons are thing, well shaped, connect to the wing beautifully and the inner and outer pylons are correctly shaped.
ENGINES: The Gemini Jets JT9Ds are well shaped and detailed but unfortunately they are just way too small at the primary nacelle, which can almost fit inside the NG Models fan opening. There are no size issues with the Herpa or NG versions although the thickness and join of the nacelle front to the nacelle cylinder on the Herpa is not as nice as the seamless NG version. None of the versions utilise see through engines.
WING ANGLE & STRUCTURE

WING ANGLE: Only the NG Models version of the 747SP captures the gentle curve of the 747 wing towards its outer edge, which nonetheless still leaves the wingtips higher than the wing join. On the Gemini the wing angles upwards in a straight line so that the wingtips are too high. The Herpa has a more gentle angle although once again the wings angle upwards in a straight line. Also note how thick the wings are on the Herpa model - right to the wingtips.

TAIL & TAILCONE
TAIL / TAILCONE: One thing that is noticeable when you stand the 3 SP moulds together is that the NG version has a slightly shorter tail. I was interested to know if it was the correct height so I got the measurement of the real thing from ground to tail top (20.07m) and measured the models to see which matched most closely. Fortunately all 3 sit at the same height at the tailcone so it truly is just the tail that is different. The NG version is 4.9cm high, The Herpa is 5cm and the Gemini is 5.1cm. It is a minor difference between the three but noticeable when they are together. The correct height should be 5cm so the Herpa is the closest fit for me. Unfortunately the Herpa tail is let down by the poor fit to the fuselage whilst both it and the Gemini are old enough not to feature the free rudder of the NG. The NG version is also the only one to model on the little bulges at the tail top. At the tailcone they all look good but I'd say NG has done the best at modelling in the APU pipe. 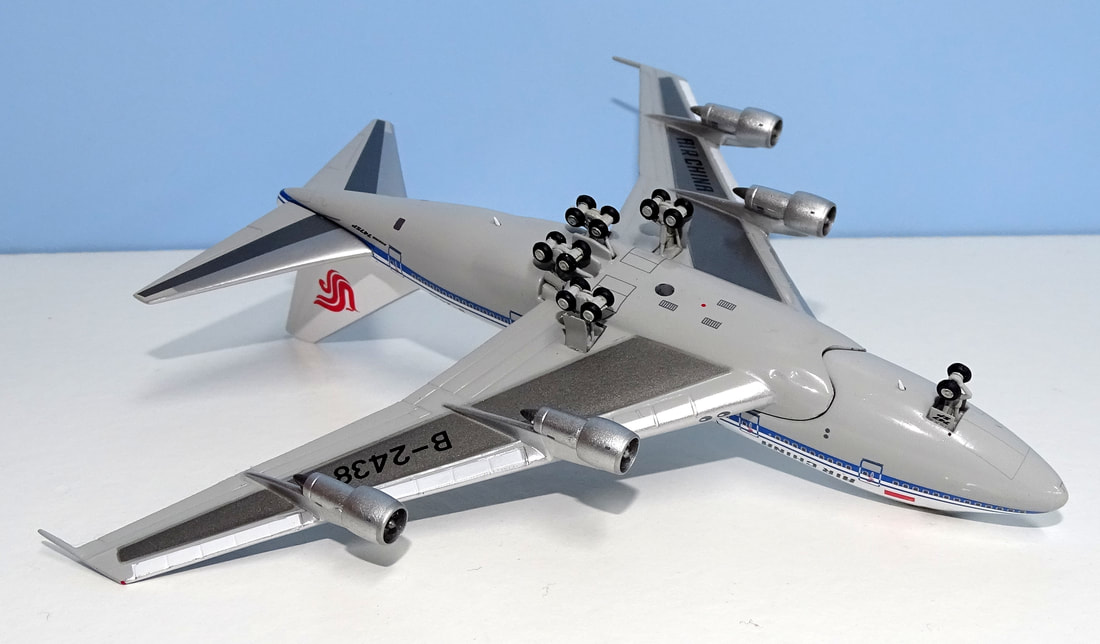 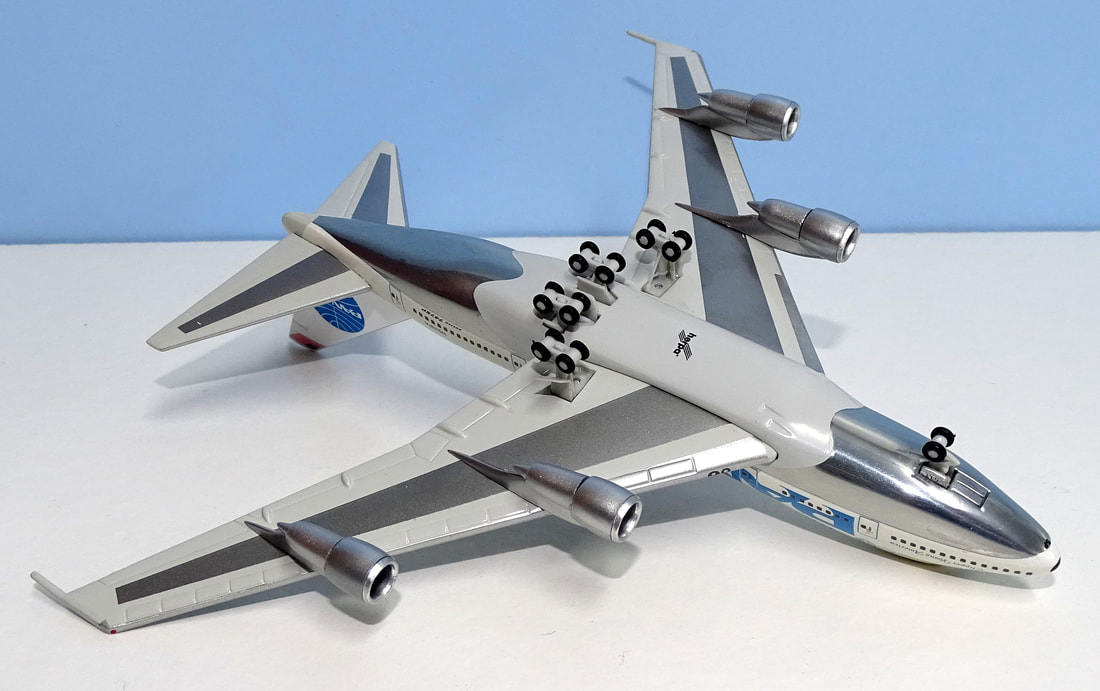 The NG Models version below is the only one to have the correct pattern and size of flaps and to replicate the flap track fairings well. On the minus side the paint is rather heavily applied, which obscures the detailing somewhat. 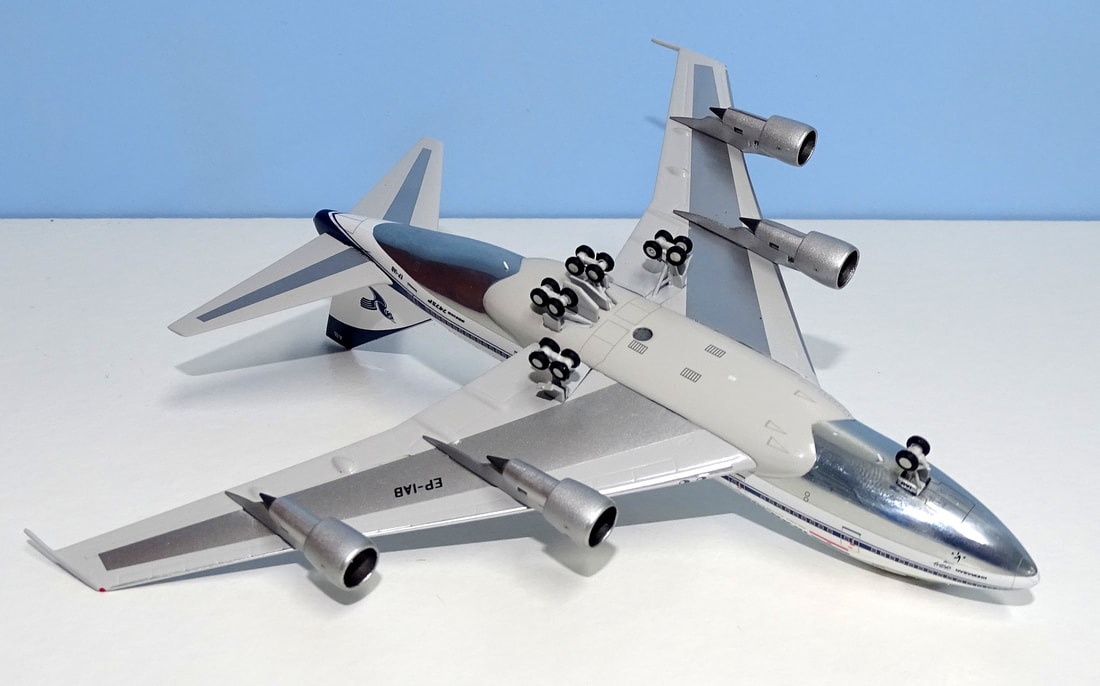