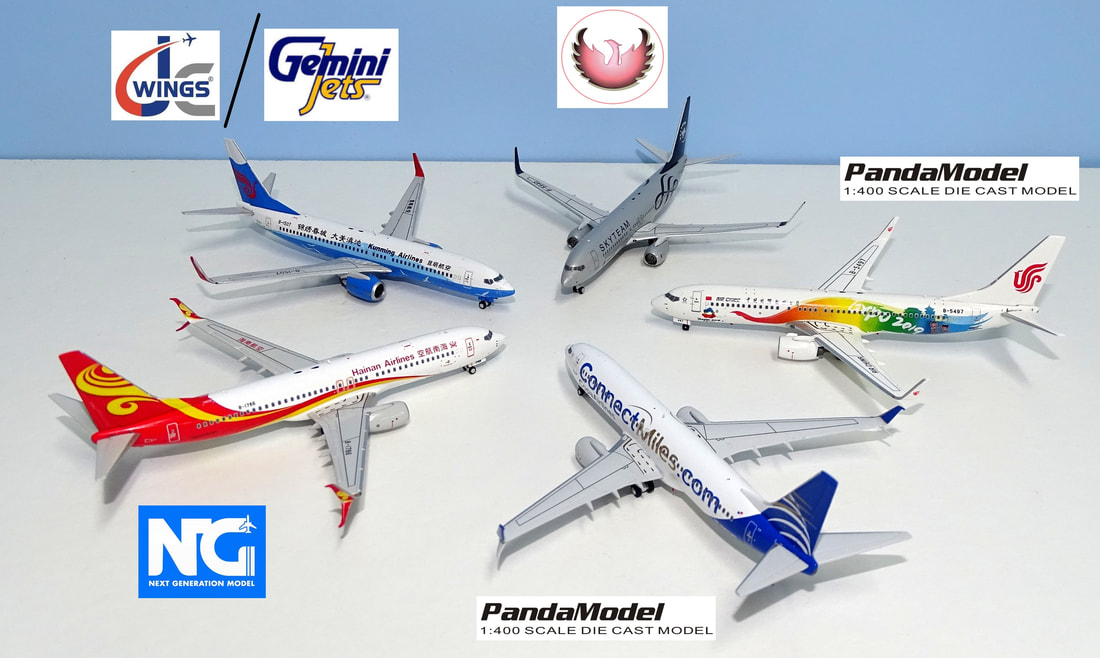 Despite being replaced in production by the 737 MAX it is still the Next Generation 737-800 that is the focus of competition between 400 scale brands with two new moulds appearing in the last few years to contend with the three previously active versions. One of the new moulds replaced the previous version from the same brand (Panda Models), although in this review I'll include both versions. The other new mould is of course from NG Models who debuted their 737-800 well before the rest of the 737NG family and have gone on to use it quite heavily so that it isn't far off being as used as the much older Phoenix and JC/Gemini versions. 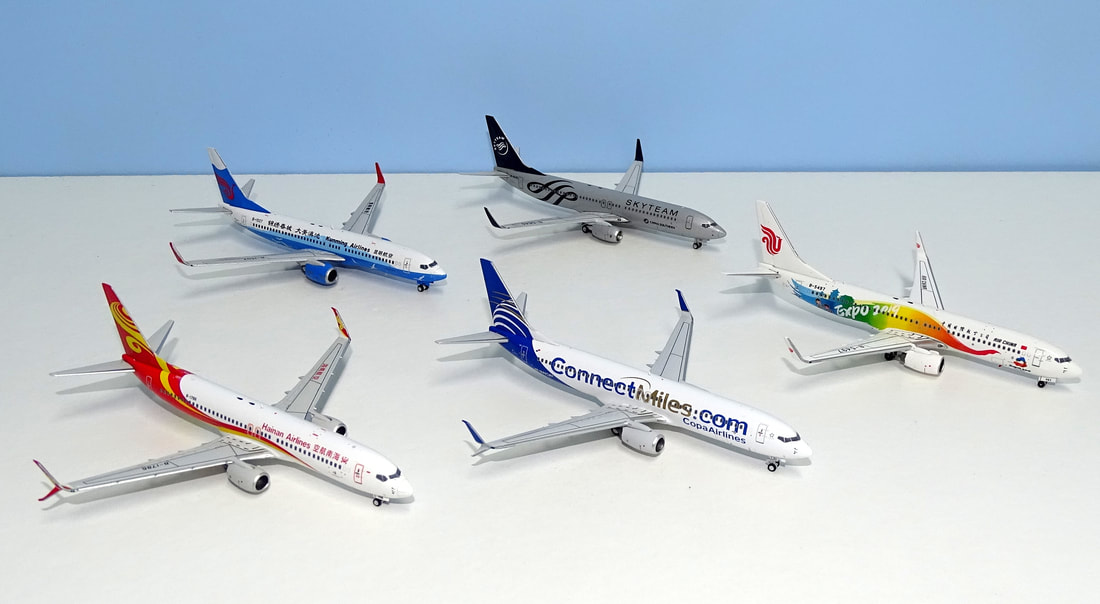 The moulds to be compared in this detailed comparison will be the following:
There have been four earlier 737-800s made in this scale by Herpa, Gemini Jets, Dragon Wings and Witty Wings but none are still in use and all date from 2000/2001 (aside from the 2008 Witty). 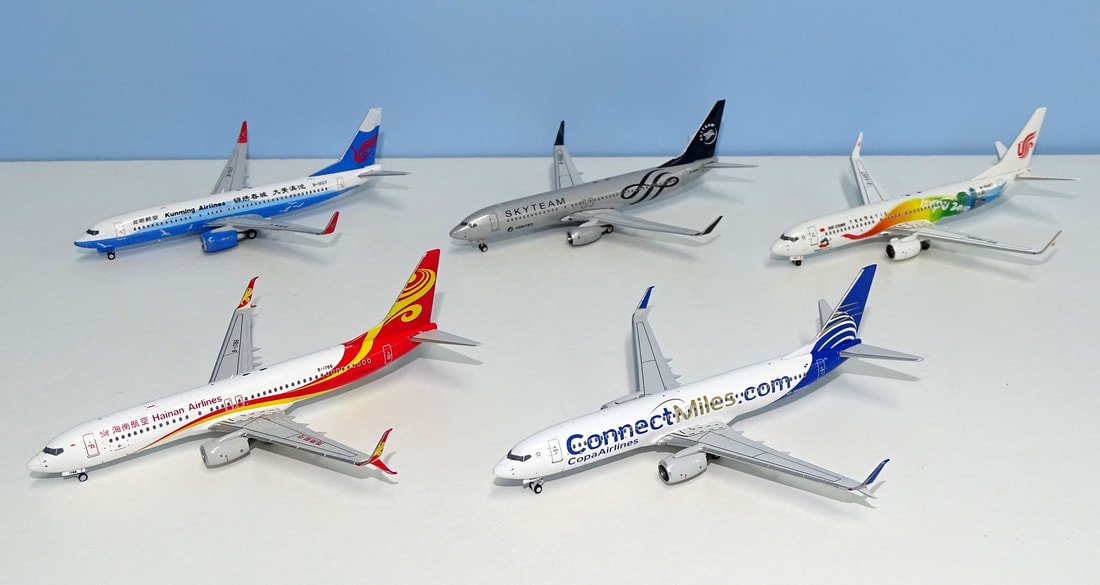 The review will take the form of a comparison of various areas of each mould to the real aircraft, with a score out of 5 allotted for each mould for each area. Adding the combined scores together gives you the winner.

​NOSE / NOSEGEAR
NOTE: Nosegears are regularly poorly fitted to 737NGs and all the moulds above have had fitment issues at times. I have tried to use good examples so have actually swapped out the NG and Panda versions for this part of the review with better examples. There is however considerable variability between models by the same brand.
NOSE: The Phoenix mould rather suffers from comparison with very little of it accurate. The angle of the cockpit isn't steep enough and the upper nose angle gives it a rather duckbeak-like look. It is the weakest of all 5, followed by the JC Wings version which has a rather steep forehead above the cockpit and a quite pointy nosecone. The other three all have good noses but the new Panda and the NG version are I think the best.
NOSEGEAR: The nosegear is an area that has been a problem for most 737 moulds and almost all of these examples don't get it right either. The 737 nosegear should follow the fuselage line and has small curves at its upper edge. It is the wrong shape on all the moulds except the NG. On all the others it is too indented into the fuselage and the bottom is too square. The doors are too large on the JC and first Panda, and way too small on the newer Panda. The Phoenix door isn't too bad but you can see the angles of its edges are too close to the vertical. In terms of the gear leg and tyre the tyre on the JC is too large. The gear leg on the Phoenix ok but often in the wrong position on the models. On the original Panda the tyre is rather simple. This is improved on the newer Panda but the gear leg looks too long. This is mainly an artefact of the too small gear doors. Even so, the rear process of the gear leg is rather large. Once again the NG is the best although sometimes QC issues mean it isn't fitted perfectly.
ENGINES & PYLONS / MAINGEAR
MAINGEAR: There is quite a bit of variability at the maingear. Both the JC and Phoenix seem to have the wheels rather forward of the gear door, while the JC has the flared portion of the door much too high. Both models also tend to have a slight nosehigh attitude, which is not correct. The maingear of the older Panda is a major weakpoint across the board but it is at least the right height. The NG and new Panda again have the best maingear but I think the angle of the flared part of the geardoor is better on the Panda.

Panda New
BLENDED & SPLIT SCIMITAR WINGLETS
Phoenix don't have working split scimitars for their mould. They did try but the two examples they did had an appalling new wing and they have not reworked it or used it again. The old Panda mould also did not have a split scimitar version.

The other three moulds all have the Split Scimitar winglets available, although I don't own any JC Wings / Gemini Jets versions with them. The images here for that mould are from Gemini official shots.
The modelled Split Scimitars are surprisingly good here. It is obvious that the Panda lower portion of the scimitar is shorter than the NG version. The longer NG version looks more correct. It is hard to tell for certain with the JC Wings splits but they look a little chunkier and thicker than the others to me.
Scoring in this category covers both winglet types (with the mould marked down 1 if there are no split scimitar variety available).

TAIL & TAILCONE
TAIL & TAILCONE: The rear fuselage is an area of least concern for all the moulds. They all carry off reasonably convincing tailcones and, vertical and horizontal stabilisers. All the stabilisers on the JC mould are plastic not diecast metal. On the Phoenix the tail join to the fuselage doesn't run for the proper length. It is too short making the rudder look too wide. This is a common issue with several Phoenix moulds of this age.

AERIALS
The 737-800 has 5 aerials or drain masts large enough to be able to feature on a 400 scale model. Two of these are under the fuselage just rear of the wingbox and one of them is offset to the left. The newer NG and Panda moulds feature all 5 and they are small and well sized. The JC Wings / Gemini mould sometimes has all five but regularly sticks to the four main ones. The aerials on this mould tend to be oversized. The old Panda mould also has just four but they are better sized. The same is true of the Phoenix, which was one of the first moulds to be fitted with aerials.
NOTE: Below the Phoenix model has been swapped for one with aerials and the JC Wings swapped for one with better fitted wings