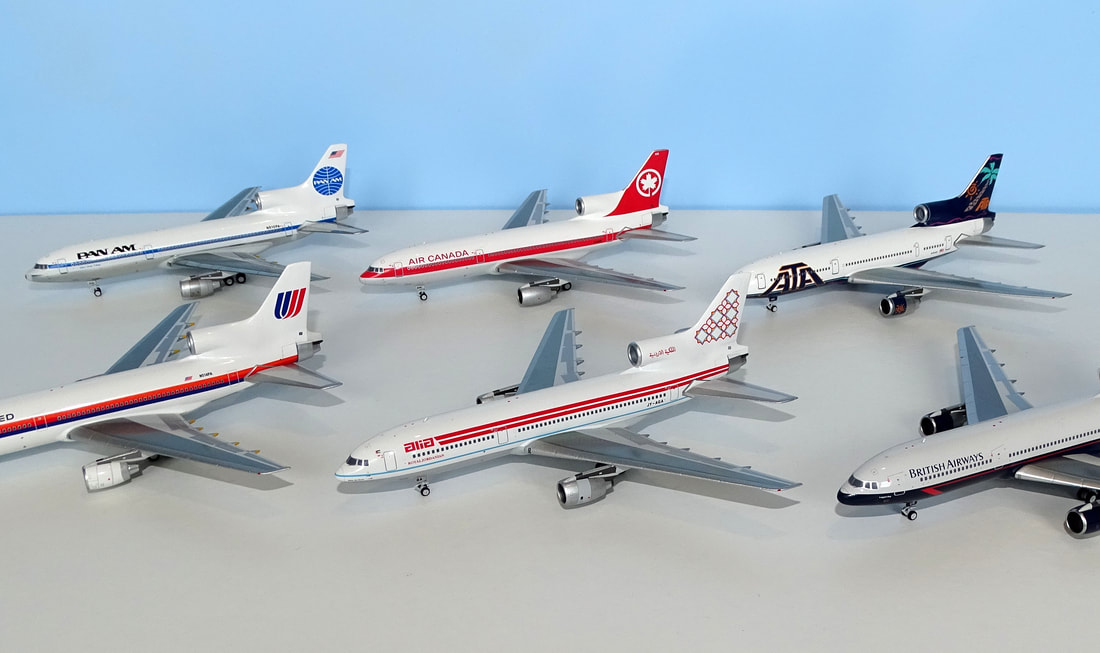 The Tristar 500 was Lockheed's rather desperate attempt to match the range of the DC-10-30 by shrinking the standard Tristar and buying a weight decrease for range (like with the 747SP). It was the last variant of the Tristar but arrived too late to stop the DC-10-30 from taking the lion's share of long range tri-jet orders. In fact the series 500 didn't fly until October 16, 1978. It did gain significant orders, most notably from Pan Am, but also TAP Air Portugal and Royal Jordanian, however most operators already had standard Tristars. In later years the type found favour with charter operators like Air Transat and ATA. 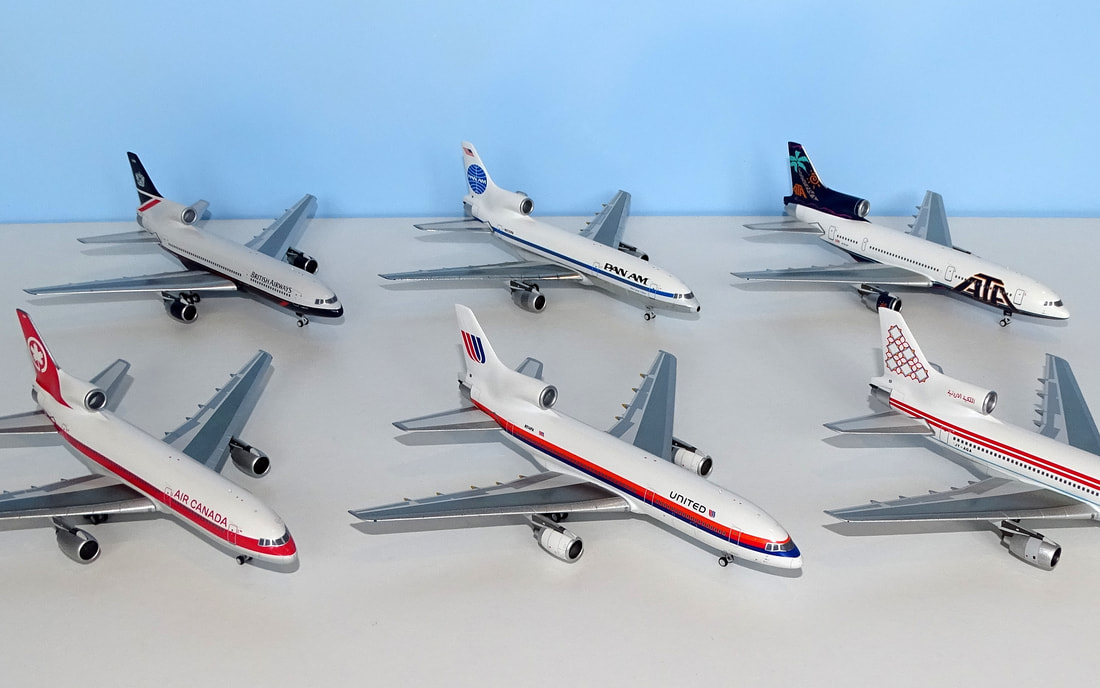 Only 50 Tristar 500s were built but that is still 1/5th of all Tristars made and there is a decent number of airlines that operated the type, plus the RAF. As with the full length Tristar the series 500 was almost completely ignored in 400 scale until 2018 aside from a large batch of Blue Box releases, which seemed to sink the market for others. At least the Blue Box series 500 is better than their series 1 mould.

By late 2018 it was clear that NG Models were making new L-1011 moulds and this seemingly spurred Gemini Jets and Aeroclassics into action with their own new moulds. While the Aeroclassics efforts could be seen as real competition the rushed nature of the Gemini output suggests it was nothing but a spoiler - see Cynical Spoiler or Great Tristar: Gemini's 500.

​What seemed in 2019 to be major new green fields for the type has not quite turned out that way. The Aeroclassics effort, marketed as Lockness Models, is unfortunately an inferior mould and NG Models have released only a trickle of Tristars to date. Both of these are disappointments, but it does mean the number of L-1011-500 releases has increased from 61 to 90 since 2019.
Below is the existing output of Tristar 500s as of April 2022: 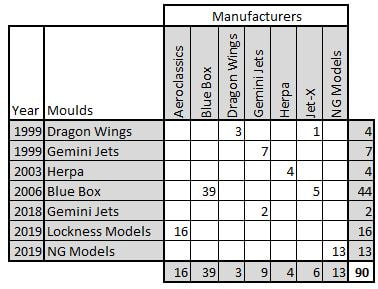 The differences between a Tristar 500 and it standard length sibling are larger than you may imagine. They include: ​
​It is surprising how few of the manufacturers of 1:400 scale models seem to recognise all of these points! In fact to date only 2 out of 7 have accurately produced a Tristar 500 at all.

Above - a full lengthTristar 1 for comparison

Gemini used their Tristar 500 only right at the beginning of their production and therefore all but 2 of the 7 releases have simple stalk landing gear without any nosegear doors. Otherwise it shares all the features of the standard Gemini Tristar - except for the tail. The tail is actually a massive improvement over the standard Tristar tail as they have redesigned the engine intake area, which not only has the frisbee fairing but also has a much better curvature around it. Unfortunately as this mould shares the features of the standard Gemini Tristar it is also very inaccurate.

Not only does it use the shorter wings of a Tristar 1 but it has a huge seamline. To add insult to injury this seam follows the curvature of the fuselage/wing fairing of a standard Tristar rather than a Tristar 500. Oh and it's very ugly too! So Gemini only get 2 out of 4 of the characteristics of a Tristar 500 correct on this mould.
Dragon Wings (1999)

Dragon may have used their standard Tristar only 6 times but the short series 500 only got 4 run outs and 3 of those are Pan Am (one is a Jet-X release). Doubly annoying is that as very early releases the Pan Am examples have large ugly tyres on their already simple undercarriage. At least they can be removed and exchanged for smaller ones. The other model, a United example, is actually really nice and the best Tristar 500 made in this scale prior to NG Models' mould's arrival. The nose on the Dragon 500 actually looks better than that on the Tristar 1 and they have upgraded an already good tail for this version well. Even better Dragon actually looked at the Tristar 500 and their version has not only the correct wings but the correct wing/fuselage fairings as well.

Such a shame the mould was never really used as it is an accurate representation of the type and has no seams.
Herpa (2003-2005)

Agghhh bloody Herpa! Another one of their barely used 1:400 moulds, but in this case perhaps that is a good thing? The undercarriage legs look too short to me rather damaging the profile of the aircraft. The mould is seamless but this must be weighed up against a squarish nose and cockpit top line plus a poor middle engine / fuselage join. Additionally apparently there is a visible fanblade inside the middle engine, which of course shouldn't be visible on a Tristar. It does look like they have made the wings the correct span and the fuselage/wing fairings look good. So this has the potential to be a decent mould with some tweaking of the nose and undercarriage. Of course it doesn't matter as it was used 4 times and then forgotten about. There is an old review of the Delta example here.

Onto Blue Box and after what I've said about their standard length Tristar you would expect further disappointment. With the series 500 however it is not so bad. The nose still isn't perfect but it looks better whilst the tail has had a complete redesign and now looks pretty good. The engine is still a bit too tall but they have fixed the lack of curvature and the engine/fuselage join to make one of the better Tristar tails. In fact this mould bears such a strong resemblance to the original Gemini Tristar 500 that I am almost tempted to think they are one and the same. Of course that means that the fuselage/wing fairing and wings are inaccurate just like on the original Gemini.

If anything the Blue Box series 500s are even rarer than the standard Tristars and they still had a silly tendency to release chrome and gold plated versions of some of the models. The cockpit printing does sometimes leave a bit to be desired but there are some nice examples for Pan Am and several other major operators out there. They have also released some very obscure, but welcome, liveries like Sudan, TAAG and Hew Bora too. What they haven't done is several really obvious models like British Airways, Air Lanka and Delta.
Gemini Jets / JC Wings (2018)

You would of course expect that any new Gemini Tristar would be a seamless mould (it is) and an accurate representation of the aircraft (it isn't). Gemini's own release photos showed that the mould has the same inaccuracies as their 1999 effort did. Basically it is a chimaera with the Tristar 1 wing and fuselage/wing fairing grafted onto a shortened Tristar 500 fuselage. These aren't the only issues as my detailed review discusses:
Black Hawk: Pan Am Lockheed L-1011 Tristar 500 N511PA by Gemini Jets Detailed Review 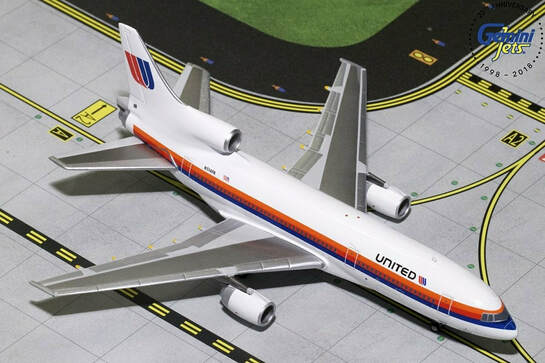 I was surprised that such lazy design work for a new mould could happen in this day and age but clearly Gemini / JC Wings were really just creating a spoiler rather than a proper mould. As with their standard length L-1011 this mould has, fortunately, barely been used.
Lockness Models / Aeroclassics (2019)

To say this mould was a disappointment to me is rather an understatement. I had high hopes for the Lockness Tristars but they have proved to be inferior to the NG Models mould in every respect although they do at least try to replicate the features of a 500. To that end it does have the modified fuselage fairings, frisbee fairing and shorter length of a series 500 but doesn't appear to have the longer wingtips. Unfortunately the overall shape of the mould is on par with the awful Gemini Jets Pan Am L-1011-500, which scored a shocking 4/10 for the mould in my detailed review (see link above).

The United example shown here does look worse due to its poor cockpit printing (something improved in later releases like the BA pictured) but still has a weak shape across the mould. The nosegear is ugly, in the wrong position and too short, the maingear doors are welded to the gear leg as one piece with the tyres outside of them, the edge to the number two engine is sharp and crooked and the frisbee fairing is deformed.
A quick comparison of both the Gemini Jets and Lockness Tristar 500 with the original NG Models sample mould clearly illustrates how poor they look against it.

NG Models (2019)
This mould is so much better than all the others (aside from perhaps the Dragon Wings version) that there is really no excuse not to buy it over them aside from the fact that NG Models have not used it to its fullest potential and reams of Tristar 500s remain to be made. I looked at the sample moulds here:
NG Models Lockheed Tristar 500 Mould Sample Detailed Review
Since then minor tweaks have been made for the actual releases, which have been superb. The only problem is there haven't been nearly enough of them, with only 13 models in over 2 years. Needless to say I would like to see a lot more!