Aeroclassics 767-200s
The Boeing 767 was one half of Boeing's portfolio of all new aircraft for the 1980s (along with it's sister the 757). A small widebody aimed squarely at the 707/DC-8 replacement market and as a competitor for Airbuses A300/310 family. The original version was the 767-200, with the shorter series 100 not built due to overlap with the 757. Launched in July 1978 the series 200 first flew on September 26, 1981 with deliveries to launch customer United exactly a year later. It was the 767-200ER version that really made the pace though with an increased MTOW and wing centre section fuel tank. This entered service with Ethiopian in May 1984 and the type pioneered (along with the A310-300) ETOPs certification. Only 128 767-200s and 121 767-200ERs were built as the series 200 was rapidly overtaken by its larger brother, the series 300. The majority of aircraft were delivered by 1994 except for a strange order from Continental as late as 1998. Many aircraft have gone on to second lifes as freighters whilst military orders (especially the new KC-46 Pegasus programme) will keep the line open for the foreseeable future.

Until October 2018 the 767-200 hadn't gotten the attention that its rival, the A300, or brother, the 767-300 had in 1/400 scale. In fact there had only been two moulds made, with a total of 69 models. Things weren't looking to bright as only one of those moulds was available for use and it was used very infrequently. Fortunately in October Aeroclassics announced their first 767s on a new mould (although the first month's releases weren't advertised as Aeroclassics). Since then they have produced an impressive 47 models making this new mould the most heavily used already. Hopefully 767 releases will continue into 2020. 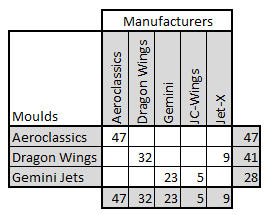 Before we get to the moulds as usual we'll start with a look at the real thing (in this case with Pratt & Whitney engines):

The Dragon 767 was a very early mould in 1/400 and remains one of Dragon's best efforts. Some of the earliest versions seem to have a slightly pointy nose (see the Ansett below) but generally the shape of the mould is excellent. Dragon were an early adopter of seamless moulds so this 767 still stands up to modern scrutiny as long as you don't mind the usual Dragon weakpoints - undercarriage, plastic wings and tail attachment. Having said that in this mould the undercarriage is actually pretty decent. Jet-X used this mould a few times too (mainly for Piedmont/US Air hybrids) and the airline coverage was passable, at least to begin with. Six of the releases have been military (5 of them JASDF AWACs) so you can see there is still plenty of room for extra models but with Dragon's exit from 1/400 (aside from made for Airbus models), and Jet-X's departure from the scale altogether, this mould is unlikely to ever be used again. Still most of the models made are really nice and can often be picked up for peanuts.
Below is a selection of Dragon 767s:
Gemini Jets (2005-Present)

Gemini introduced their 767-200 mould just as the type began to drift out of mainline service but that doesn't stop it from being an excellent moulding, albeit one with a seam around the wing/fuselage fairing. The vertical stabiliser is part of the fuselage on this mould so there are no join gaps like with the Dragon however the nosegear leg is simpler than the Dragon and doesn't have the correct shaping.
The nosegear in the pre-rolling wheels versions is also where the biggest issue is. On quite a few models the nosewheels don't touch the ground. You can see it below in the AA, USAir and US Airways examples. This was remedied in 2010 when JC Wings added rolling gears to the mould, however only a handful of models have been produced since then. I own one - the UTAir version from JC Wings. As you can see at present JC has not added aerials to the mould but I wouldn't be totally surprised if they eventually did seeing as they have to the much inferior Gemini 737-200. 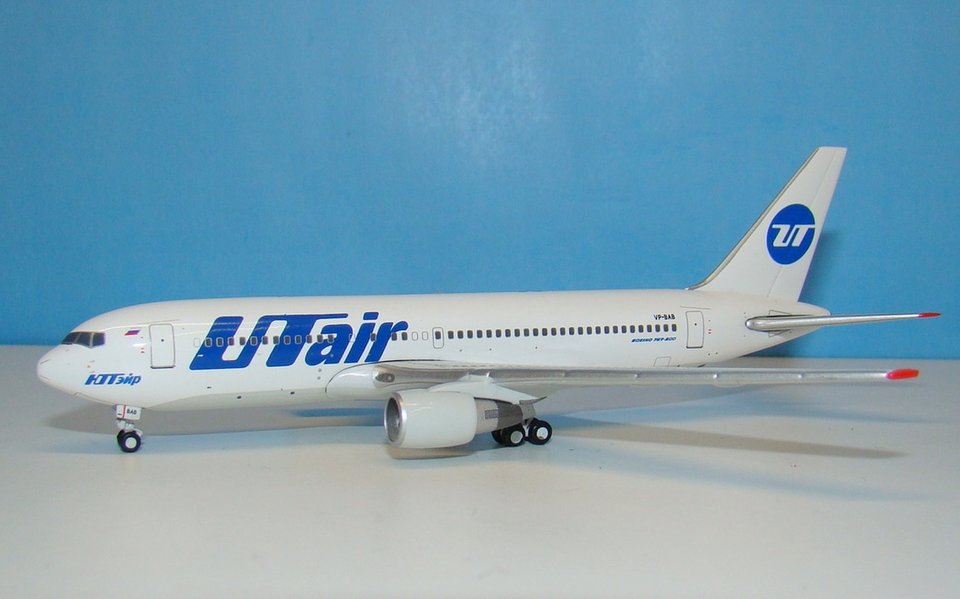 I can recommend the Gemini / JC production run almost entirely. The exception is their attempt at a Piedmont aircraft. The cockpit windows are a disaster and this has to be one of the ugliest models Gemini ever made because of that. Avoid and get the Dragon version instead:

The appearance of an Aeroclassics 767-200 came rather out of the blue but has proven most welcome, even if there have been a few minor hiccups along the way. Obviously the mould doesn't come with aerials, since Aeroclassics don't believe in them in 1:400 scale, but otherwise the mould is pretty good.

One of the early releases with the simple undercarriage
The fuselage shape is excellent especially at the nose and tailcone. The blunt rounded nose of the 767 is re-created well and I can’t fault the tail region either. In fact one of the nicest parts is the vertical stabilizer itself, which has a deep and effective rudder line rendering extra printing unnecessary.

The difference between the early and updated gear
The mould is seamless and so the wings slot into the fuselage. The wings are nicely shaped and have accurate flap track fairings, which protrude the correct distance behind the wing rear edge – again an improvement over the Gemini mould. The only point of issue is that perhaps the wing/fuselage fairing is a little under-represented ahead of the wing.

Under the wing the engine pylons do not reach far enough to the rear but otherwise are well shaped. The engines themselves are decent representations of Pratt & Whitney JT9Ds, although the nacelle is a little long. Unfortunately Aeroclassics has not made different engines for the P&W and the CF6-80C2B2, which at the nacelle should have a longer exhaust without the cone being visible. This is a shame, but not unusual for Aeroclassics either.
The undercarriage has varied throughout the production run, or at least after the first month's releases. The initial tyres were small and simple rings on spigots but these have been replaced by a superior set of wheels with tyrehubs. It is a major improvement, although the nosegear tyre is now a little too large. The maingear is nice but the doors aren’t particularly accurately shaped. 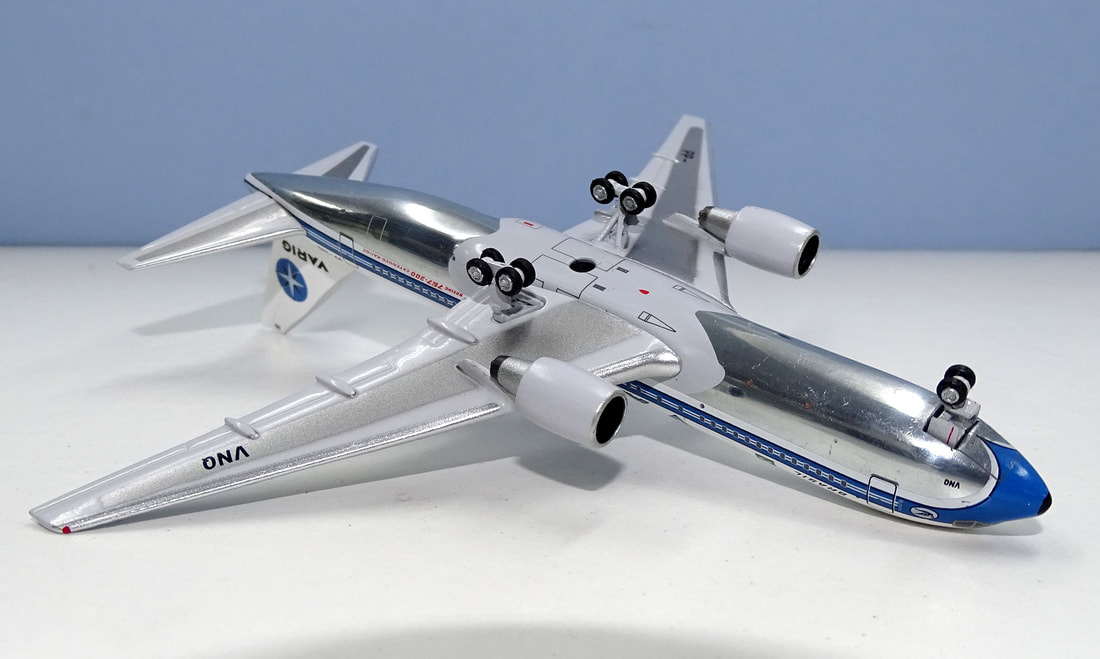 Overall this is a nice mould, but it is not faultless and with the strength of the previous two moulds and the weakness of the engine shape, lack of aerials and tyre size it is not always a necessity that you replace your older 767-200s. Nonetheless it is an excellent platform from which to build up your short 767 fleet.
Coverage
Prior to the arrival of the Aeroclassics mould coverage of 767-200 liveries was very patchy at best. The most pressing need had been for a TWA delivery colours 767-200. Gemini made a sample back in 2004 but for some reason only made 6 of them!

Gemini's sample model TWA delivery colours that was never released :(
Fortunately you can always rely on Aeroclassics to use their moulds quite heavily after they have been initially released. One of the first models they made was the TWA twinstripe (albeit they didn't do a great job of it). In January 2019 I wrote a 767-200 wishlist post with the highest priority unmade 767s on it - see:
To ER or not to ER: A 767-200 Wishlist
Since then Aeroclassics have, by August 2019, made 11 of the 31 aircraft I mentioned. Since they have made 47 models to date it is clear that they have also been covering some territory already covered by others. This is understandable, although to be honest they haven't always made better models than their predecessors. I have certainly replaced some of my older Dragon and Gemini 767s with Aeroclassics (USAir, United and Air New Zealand for example) but have not done so with others (Spirit of Delta and Delta Olympics). It is nice to have the choice and I can heartily recommend picking them up to fill what was until recently a sizeable gap in any large collection.