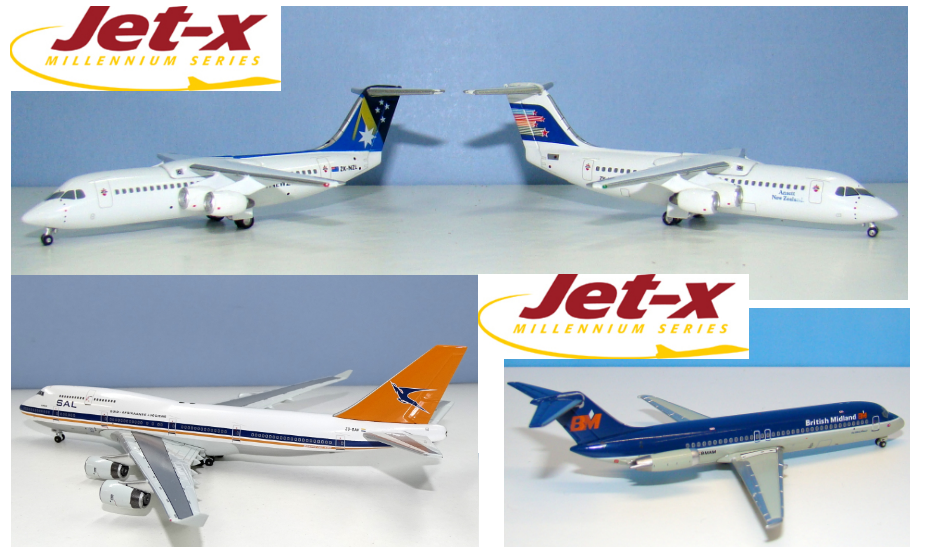 Many thanks to Brian Wiklem for answering my many questions
By 2005 Jet-X was one of the largest and most successful 1:400 scale brands having leveraged Dragon Wings moulds and expertise to produce a wide range of nice releases. At about this time however Dragon began to scale back its own releases and Jet-X's founder Brian Wiklem was interested in producing models on his own new moulds. This would pave the way for an amicable break with Dragon Wings and the sale of Jet-X entirely.
​
Break with Dragon
Even though Jet-X stopped using Dragon Wings for their model production the relationship with Dragon remained strong. As Brian relates:

"​Dragon’s U.S. distribution arm not only picked up distribution of Jet-X, but also the new Jet-X releases under Jimmy Wu that were not using Dragon tooling, showing that our relationship was still very good.  I did continue to give feedback on Dragon models and tooling samples for quite a while afterwards (last ones I did were the 1/144 cutaway models)."
The BAE-146

Of the 96 146s made under the Jet-X name many were versions of each other as had been the case with much previous Jet-X production. So for example there were 4 Jersey Europeans, 8 Air France Regional, 11 various Ansetts, 7 TNTs, 3 Cityjet Virgins and 6 United Express versions. Some versions were made for Jet-X Club members. 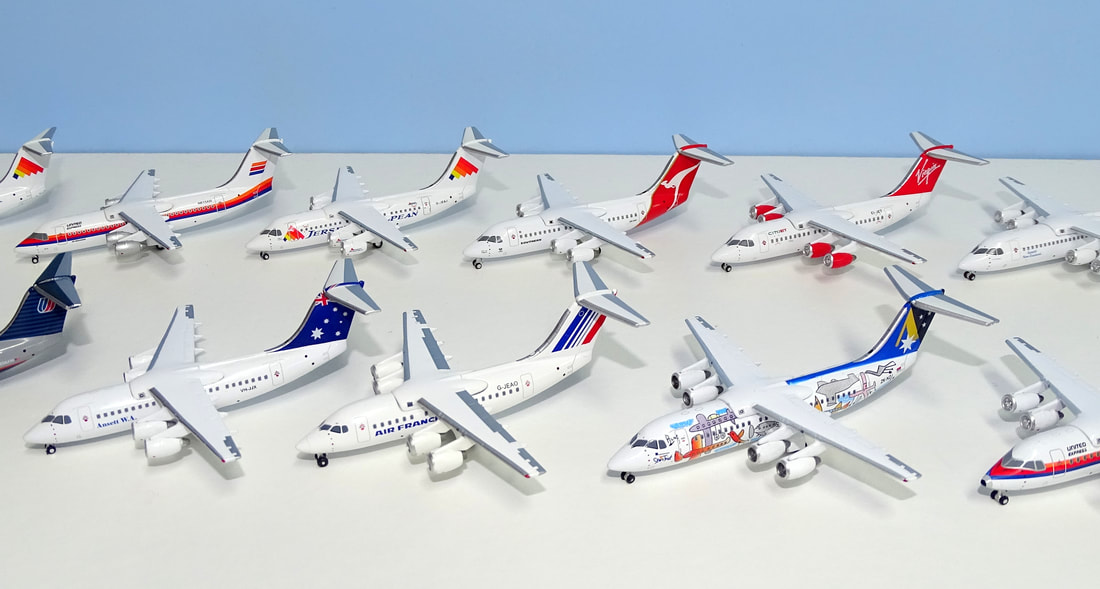 Overall the BAE-146 moulds are quite nice. Although not perhaps as accurate as the Gemini Jets BAE-146-200 mould they do not have issues with tail-sitting like the Gemini does. The moulds still exist as part of the JC Wings catalogue and have been used by Gemini in recent years as it seems their own BAE-146 is no longer available.

Jet-X BAE-146 Production Numbers
Using the Blue Box Tristar
Jet-X also began to use some of Blue Boxes existing moulds, or at least the L-1011. The first non-Dragon models were in fact a trio of PSA Lockheed Tristars that used the 2005 Blue Box mould (for some reason Jet-X never used the Dragon L-1011). These were followed up later with the obvious series of fantasy Braniff Jellybean Tristars – eight of them!!

Apparently there were only 10 of this gold Braniff L-1011 N106BN made. A similar piece registered N105BN was made for club members
New Ownership
Sometime during late 2006 or early 2007 Brian sold Jet-X entirely to Jimmy Wu. Brian had found that Jet-X was requiring too much of his time and in his opinion the market was flooded. In the end he had to make a choice between Jet-X and his career and he chose the latter.
Brian's involvement with Jet-X remained for sometime:

"I recommended airlines and aircraft, and assisted with licensing where possible.  But they were recommendations only – Jimmy produced what he wanted or thought would sell well.  To be honest, at that juncture I was more invested in 1/200, not 1/400.  I liked the size and detailing of 1/200 better."

The New Jet-X
Jimmy Wu took over the day to day running of the company but the releases through 2006 and 2007 remained the same - primarily BAE-146s and L-1011s. Blue Box had been working on its own new moulds however and late in 2006 a new DC-9-10 appeared. This mould was pretty decent but for some unknown reason it was barely ever used. After a 5 pack of Continental DC-9s was released it only got a few more usages and two of these in 2009 featured the worst cockpit printing I have ever seen on a 400 scale model. 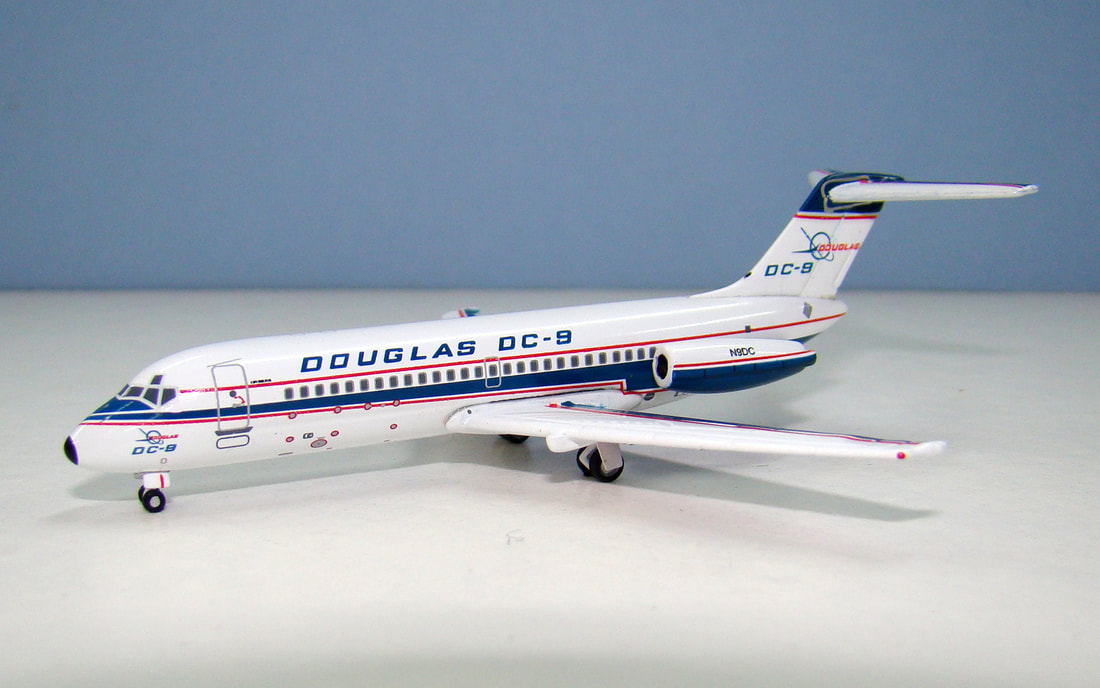 Easily the best DC-9-10 made in 400 scale - sadly this mould was barely ever used
In 2007 a new VC10 mould arrived, which was quite good, but once again was used only sporadically in 2007/2008. Like the BAE-146 mould after JC Wings acquired all the moulds the VC10 made a reappearance for a Gemini Jets model (JC makes Gemini' models) in 2015, presumably as once again Gemini's own VC10 was no longer available.
Blue Box Becomes Jet-X
In 2008 the usage of the Blue Box brand name ceased and it seems evident that it was merged into the more respectable and well known Jet-X. From producing 43 models in 2007, using just the L-1011, VC10 and BAE-146s, 2008 brought 136 models using 14 moulds.
Below: Jet-X production (excluding the BAE-146s): 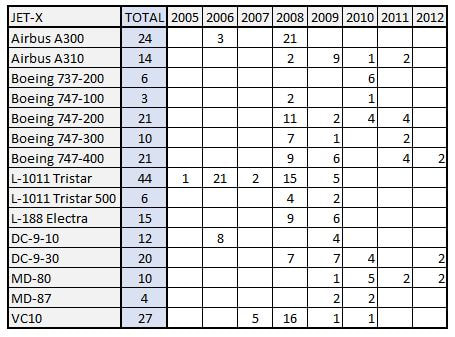 Obviously the new Jet-X had access to the variety of often lower quality moulds BlueBox had. These included the less than impressive Airbus A300 and A310. A series of 747s also joined the line-up but interestingly these did not use the previous Blue Box / Magic Models mould and instead appear to use the BigBird Mk2 version for some reason.
New mould production also continued with another random choice - a L-188 Electra. This was the fourth Electra mould Jet-X had used and remains the best version of the aircraft to date. Needless to say, the first releases were Braniff Jellybeans! Unfortunately, the new Electra would only be used 13 times by Jet-X and later 7 times by JC Wings.
A stretched DC-9-30 also appeared in 2008 and was even better than the short DC-9 mould, although it is a little too short to be a series 30. Altogether only 30 DC-9s were ever made under the Jet-X brand and several have the terrible cockpit printing problems.
Other new moulds continued to appear in 2009/2010 in the form of a 737-200 (with a very pointy nose), an MD-87 and a standard MD-80. None got very much usage and by this time Jet-X was on the decline.
Below: The Jet-X 737 has aspirations to be Concorde 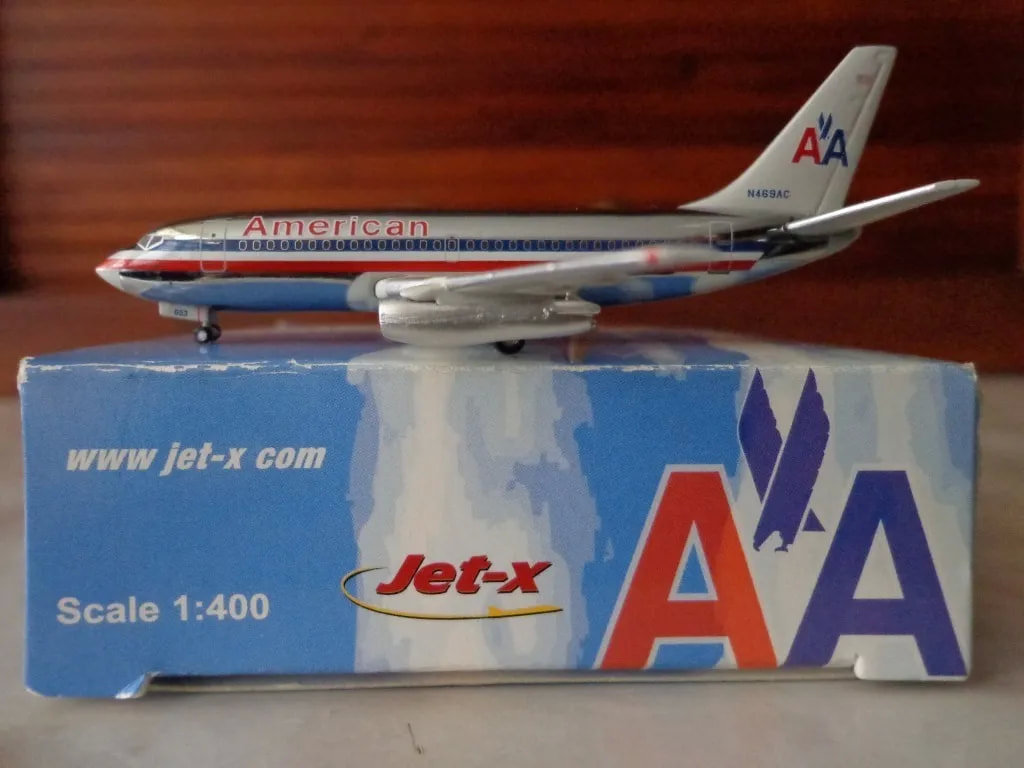 Below: The Jet-X MD-80 is a totally different mould than the Dragon Wings MD-80 Jet-X had previously used. It was a decent effort but barely got used with just 10 releases covering 5 airlines. Another waste.

Transition to JC Wings
In 2009 59 different models were made but in 2010 this dropped to only 24. By 2011 there were only 14 with 6 more following in 2012. It is hard to say whether this decline is real or not and whether there was a real change in ownership or not. Models had started appearing under the JC Wings brand in 2008 and it seems this gradually tookover from Jet-X. It may be that Jimmy Wu sold out to Johan or perhaps it was simply a brand transition? 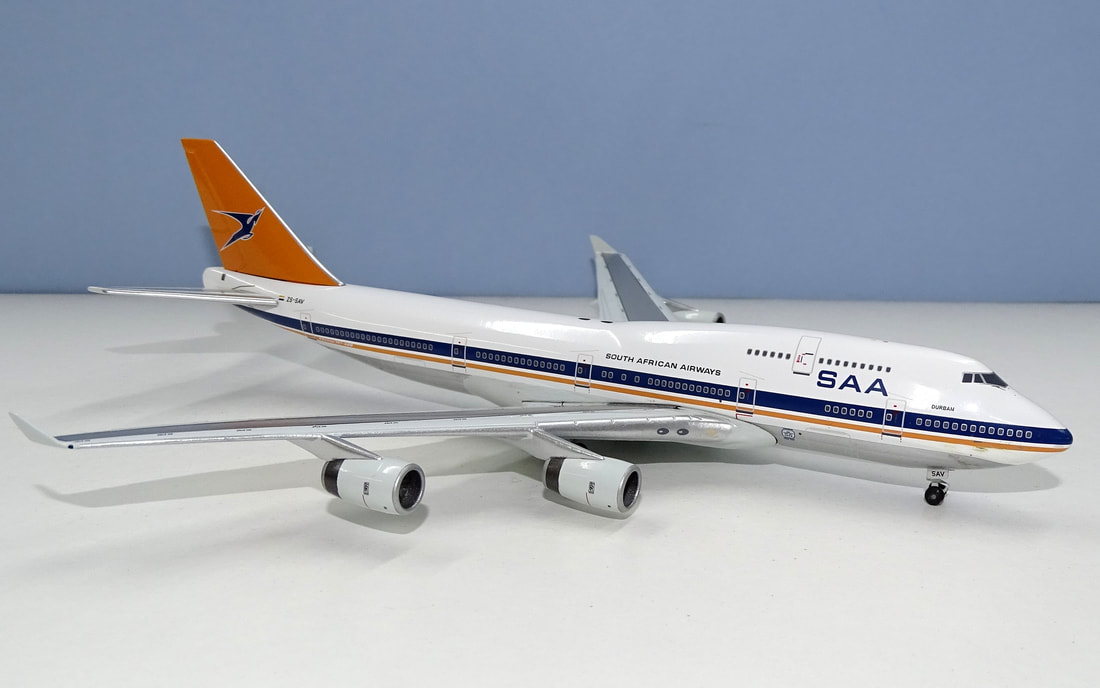 This 747-400 was one of the last Jet-X branded models and should not be confused with the Dragon era 747 castings
All the moulds are nowadays part of the JC Wings empire, although many of the Blue Box moulds have not been, and deserve never to be, seen again. Interestingly there has been some proof that the castings survive. In 2015 Gemini Jets produced an RAF VC10, in 2018 a China Eastern BAE-146-300 and most recently in 2019 an Aer Lingus Avro RJ-85. All three of these models use the Jet-X moulds rather than the older Gemini original moulds.
Summary
​The history of Jet-X is really a two-parter. Up to 2006 it was a highly respected major US based brand affiliated with Dragon. After that point it became one of many mysterious China based brands producing rather random releases, often on poor moulds. Nonetheless, despite some duds it did produce some nice new castings (BAE 146, DC-9s, MD-80s, VC10 and Electra) but its affiliation with Blue Box was criticized by some, most notably Andrew Klein of Aeroclassics, and its production output decreased in importance. Sadly just when it seemed that the new Jet-X was going places with an interesting selection of decent moulds the brand was swallowed up by JC Wings and its output largely forgotten. Regardless, the majority of Jet-X releases are fine models, and many are unique to this day and well worth searching out.
References