Disclaimer: I only started collecting 1:400 scale around 2009 and so there is a lot of ancient history that I did not witness first hand. I have tried to reconstruct events as best I can by researching old forum threads, interviewing those involved and asking other collectors. I apologise for any mistakes or omissions I have made. Point them out and I'll try and fix them, within reason.
The history of 1:400 scale covers over 20 years and more than 45 different brands, which can make it extremely complicated to sometimes understand what you are buying. This is made more complex by the obscurity of many of the brands and sharing of manufacturing resources between brands. Not to mention the outright piracy and theft that has been a common feature in 1:400 scale, almost from the start, and goes hand in hand with doing business in China, where 99% of all 1:400s have been made.
At different periods various brands have appeared, been in ascendance and then disappeared almost as quickly, however there have been various core brands that have long histories. These venerable brands, such as Aeroclassics and Gemini Jets, have not been static and their relationship with each other, factories and other brands has changed over the past 20 years.
Communication with and from brands has usually been patchy or non-existent, which makes it even more challenging to identify who is actually behind the models. There are, and have been, well-known personalities such as Andrew Klein at Aeroclassics, Elliot Epstein and Rod at Gemini Jets, Johan Chan at JC Wings, Brian Wiklem at Jet-X, Gordon Werner at SMA, and Mike and Lily at NG Models, but relatively few of these participate in the forums and the majority of brands have had no representation whatsoever.

In this and future parts I will attempt to disentangle the history of the scale.
1996-1999: Beginnings
The first models that I would recognise as being of the diecast 1:400 lineage date from 1996 and are branded as Hasegawa. They look like they were made by Dragon Wings, as the style of stand and early landing gear is a dead giveaway. As with Dragon models the fuselage is metal and the control surfaces plastic. Models are known for both All Nippon and Japan Airlines suggesting these were for the Japanese market. Photos below courtesy of Adam Rankin:
Dragon Wings themselves entered the market in 1997 with a 747-200, A321 and A340s. These moulds were quickly added too and Dragon would become the early market leader by volume. Of course its aircraft featured metal bodies but plastic wings, tails and undercarriage. Plus they came with stands and in what is still unique to 1:400 you could remove the landing gear and display the model wheels up. A fuller history of Dragon Wings can be found here:
A History of Dragon Wings Models

One of the earliest 1:400s is this 1997 Dragon Wings A321
1999: The Big Boys Arrive
The first all metal models arrived in 1999 from three manufacturers. Two of these would go on to become the most important manufacturers in 1:400 scale and one would fade into obscurity almost immediately. The latter was a brand called Sonic Wings, made by a company called IXO Models that specialised in cars and trucks. In 1999 they released a Virgin 747-400. Later, in 2002 and 2003, they would release too much inferior Airbuses (A340-300 and A340-600). The models were sold onboard Virgin flights and in some retail stores (like the one on the Heathrow spotting deck at least). Interestingly the 747 has a very Dragon looking stand but the mould looks more like a rough copy of the first Gemini 747:
1999 was also the year that Gemini Jets started releasing models, although they had been formed in December 1998. Their first model was also a Virgin 747-400, albeit in an earlier scheme. This mould is still in usage today in modified form. Gemini Jets (owned by ADI (Airliners Distributing Inc.)) with its slogan of 'Made for Collectors by Collectors' remains one of the largest and most important manufacturers today. Although based in Las Vegas production has always been in China. For a detailed look at the early history of Gemini Jets see:
A History of Gemini Jets 1998-2004 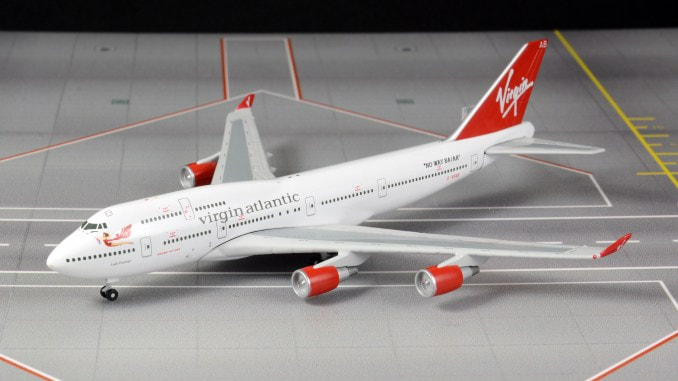 Gemini Jets first release was this Virgin 747-400 in 1999. Amazingly this mould in modified form is still in use in 2020.
The other major manufacturer to start production in 1999 was of course Aeroclassics. Originally their production was based in the UK and the models were spun cast, not die-cast. The majority of their Generation One models were also decaled rather than Tampo printed. Moulds in the first year would feature the Vickers VC10, Douglas DC-6 and BAC One-Eleven. The models look primitive nowadays but Aeroclassics would change to Tampo printed die-casts, move production to China and has made far more individual 1:400 scale model variants than anybody else. For the history of Aeroclassics Generation One see:
Aeroclassics Generation One

The very first Aeroclassics. ACBOA1 a decaled BOAC VC10. Photo courtesy of modelmanGB
The other manufacturer to start 1:400 production in 1999 was Herpa Wings from Germany. They had of course been a major player in 1:500 for sometime. Their first 1:400 mould was a 777 and in keeping with Herpa's rather odd releases Egyptair featured as one of the first models. Impressively the Herpa moulds were seamless from the off, but Herpa has never really invested properly in 1:400 scale and, although they have some unusual and unique moulds, and still make models in this scale today, they have never really made an impact. Up to 2020 they have in fact only made 297 models and are largely irrelevant in this scale aside from some very niche and hard to find Concordes, TU-144s, AN-124s and AN-225s.

Part 560085 was one of Herpa's 5 1999 releases in 1:400 scale
From this small start new manufacturers and brands have kept on popping up. By September 2001 the following models had been made (Source for these stats is here): 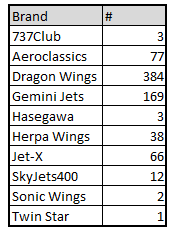 The brands in the list that haven't been mentioned will be covered in detail in subsequent parts and all used existing moulds, be they Gemini Jets (737Club and SkyJets400), Aeroclassics (Jet-X and Skyjets400) or Dragon Wings (Jet-X and Twin Star). Since that time the scale has truly taken off so that by March 2020 over 14,300 models have been made in 1:400 scale. As always the database at DiMA is the best place to see what has been made so far.
The relationships of the multitude of brands gets incredibly complicated after 2001 but I will endeavour to unpick this in future instalments and look in more detail at the history of specific brands and manufacturers.
The History of 1:400 Scale Part 2 : 2001-2008