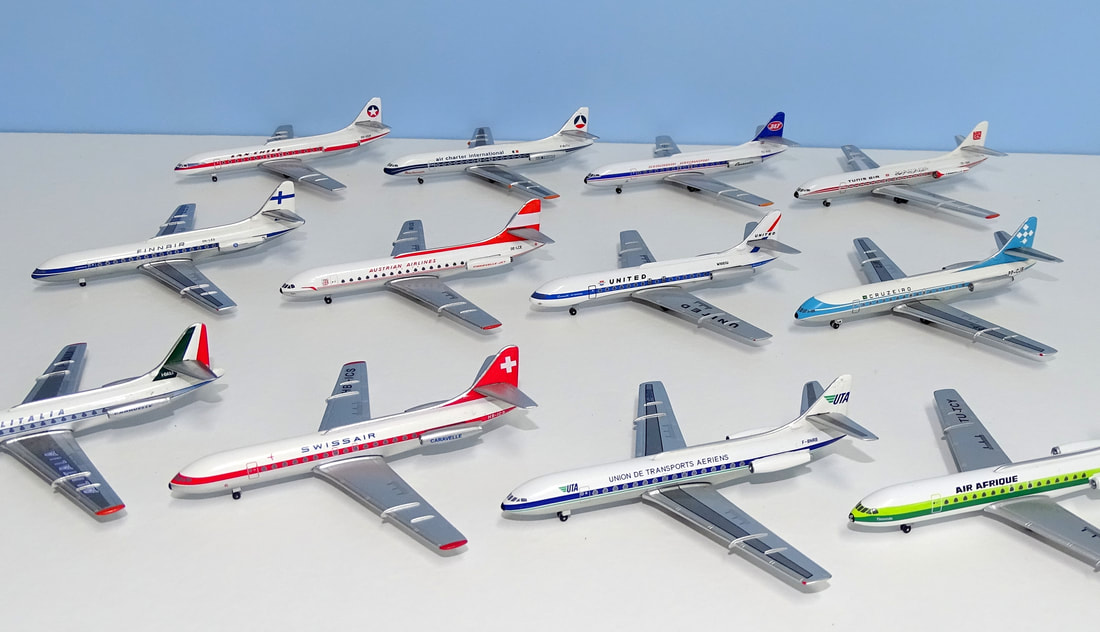 The French Caravelle was the world's first short-medium range jet airliner and took to the air in 1955 (though revenue service entry wasn't until May 1959). It used the nose and cockpit of the British Comet and Rolls-Royce Avon engines but otherwise was all French and introduced the clean wing/rear engine configuration. It is also famous for its triangular windows.

The type made good sales in Europe and even broke into the North American market, although in the end for reasons outside of its control only United operated it in the USA, and orders from airlines like TWA were cancelled. The type was regularly developed into the early 1960s but superseded by the new generation of short-haul jets such as the BAC One-Eleven, Boeing 737 and Douglas DC-9. Nonetheless the type saw further development, mainly for existing European customers, and served well into the 1990s, albeit in small numbers.

282 aircraft were built - which for the time, and considering the difficulty of selling non-US types in the USA, was a great return.

Aeroclassics unsurprisingly is the only manufacturer to have attempted a Caravelle mould. It is one of their oldest moulds dating all the way from 2002 and saw on and off usage up until 2015. Aeroclassics has gotten some stick for using its Caravelle III mould for other Caravelle variants, which had Pratt & Whitney engines (see below), although it has only done so a handful of times. Considering the dearth of classics manufacturers I think beggars can't be choosers and it doesn't bother me too much.

I certainly doubt we'll see any other Caravelle moulds in 1:400 anytime soon. Aeroclassics has, as of April 2021, made 46 Caravelles of various marks however as I understand it the mould is about to make a comeback. 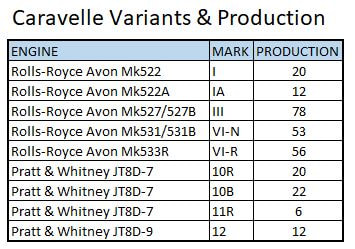 ​Rolls-Royce Variants
There were many variants of the Caravelle but the number of body forms was less. The Caravelles I, IA, III, VI-N and VI-R all had the same configuration and 80 seats, just with improved variants of the Rolls-Royce Avon engine. 219 of the 282 Caravelles built fit into these categories. They can all be represented by the existing Aeroclassics mould, albeit the engines don't match fully. This Air France Caravelle III gives a good representation of these earlier variants:​

The Caravelle VI-R had thrust reversers and bigger cockpit windows. United was the sole US operator of the Caravelle but its Caravelle VI-Rs were visually distinctive due to the lack of the dorsal spine running from the tailfin as can be seen in this shot:

Jon Proctor (GFDL 1.2
​PW JT8D Variants
All remaining variants of the Caravelle were powered by the larger shorter Pratt & Whitney JT8D engine. In 1964 Sud-Aviation introduced the Super Caravelle 10B. This had a new leading edge extension to the wing, modified flaps and a 1.4 m stretch allowing seating for 105 people. The engines were also new in the form of P&W JT9Ds. Only 22 were built.

The 10R and 11R  kept the earlier short body but the latter was fitted with a cargo door.

Pedro Aragão, CC BY-SA 3.0 GFDL, via Wikimedia Commons
The last variant of the Caravelle built, the Super Caravelle 12, was a major 3.2 metre stretch and is not represented in 1:400 scale. Sadly with only 12 ever built this is unlikely to change anytime soon!

The Aeroclassics mould dates from 2002 and 28 of the 46 releases represent either Caravelle IIIs or VI-Ns. The mould, despite its age, is good. The shape of the majority of the fuselage and wings. Arguably the nose could be a little pointier and the tailcone could be sharper but it isn't bad. Interestingly the engines appear to be more like the thrust reverser equipped Caravelle VI-R than the standard series IIIs and VI-Ns.
The Caravelle VI-R had thrust reversers and bigger cockpit windows. Judging by photos on airliners.net the cockpit windows weren't dramatically different but the side ones were a different shape and a lot larger. 56 were built including 20 for United which lacked the dorsal tail extension. As you can see below Aeroclassics didn't modify the mould at all to take into account the missing extension which as it was a one-off is understandable. 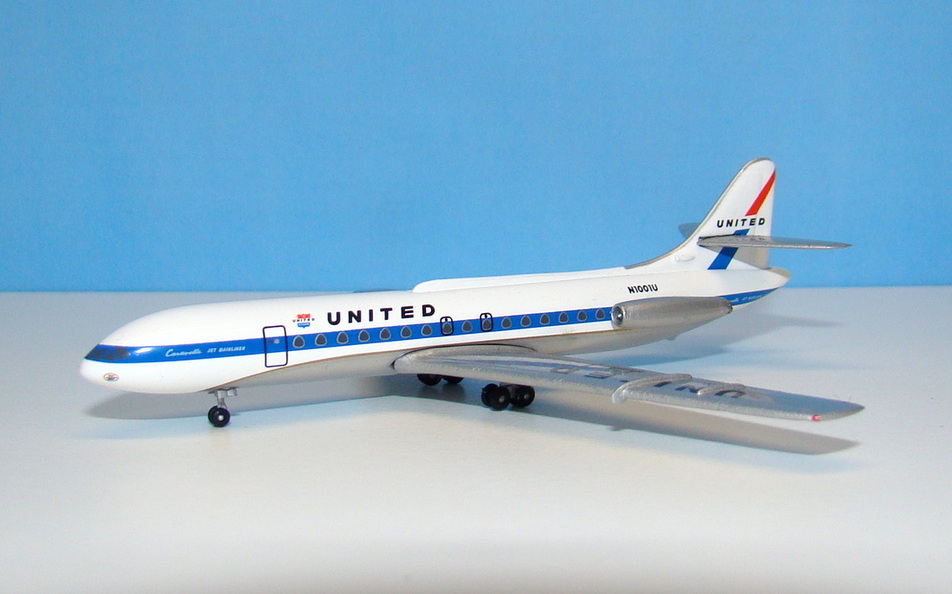 Aeroclassics Caravelle VI-R
Since the airframe was the same as the earlier Caravelles the same mould can be reused with few issues although Aeroclassics does seem to have been a bit lazy with the printing of the modified cockpit windows, which do not match the shape they ought to for a Caravelle 10R. 15 of the 46 Caravelle models made are VI-Rs.
Aeroclassics have used their Rolls-Royce Caravelle mould to represent the later Pratt & Whitney versions only three times. It would be nice to see the correct engines but if the option is not to get any or get them with the wrong engines I know which I'd choose. Here is one of the releases representing in this case a Caravelle 10R: 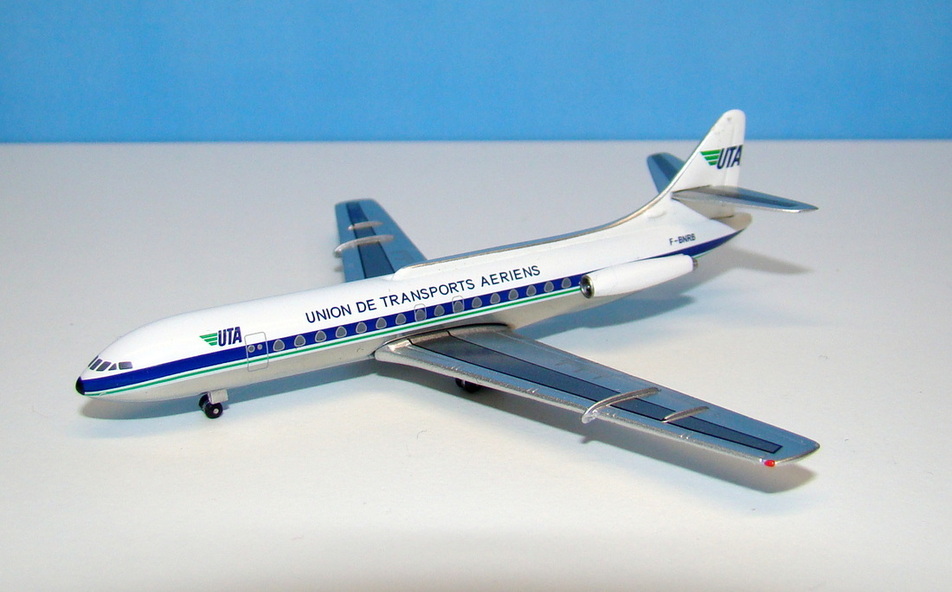 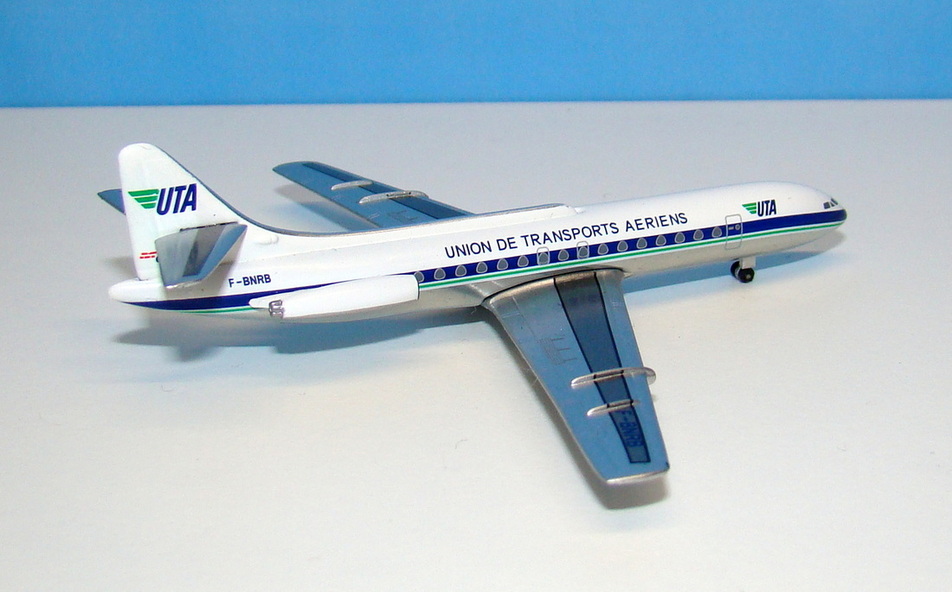 Ultimately the existing Caravelle mould is ok but as only one version exists has to be used to cover multiple variants. The variant it matches the best is the non-United Caravelle VI-Rs, as the engines match, however Aeroclassics does not print the cockpit windows correctly for that variant. Obviously it would be nice to see a new Caravelle mould with the various engine types available but the chances of that seem slim. For the timebeing the Aeroclassics Caravelle, which is often a rare mould to find, is good enough.