The Vickers Viscount was the crowning jewel of a period in British aviation manufacturing which promised much but delivered relatively little. The British were certainly correct to concentrate their immediate postwar efforts on the turboprop and pure jet engines but only the Viscount achieved its potential and though no longer the biggest selling British airliner - if you look at the impact it had and its sales in proportion to the world fleet size it was by far the most successful British civil aircraft of all time.

The initial Viscount (originally Viceroy but renamed after India's independence) was the series 630 but production began with the series 700 which had a slight stretch to seat between 48-53 passengers and first flew on August 28, 1950. The Viscount introduced the world's first regular turboprop services in April 1953 and proved itself superior to piston types, such as the DC-6, on short-medium range routes in terms of reliability, comfort, performance and efficiency. The Viscount even managed to break into the incredibly partisan US market. The series 700 was followed by the stretched series 800 and it was the larger aircraft that carried Viscount operations into the 1980s and 1990s. The last Viscount passenger flight wasn't flown until April 18, 1996 and freighters continued in service until 2006/07. Overall 445 aircraft were built.

The Viscount was built in many variants but externally these can be split into two - short 700s and longer 800s. The short Viscount v700 had an oval shaped entry door as can be seen by this Cambrian example:

Photo from Wikipedia
The longer and radar equipped v800/v810 had a pointier nose and more standard rectangular entry door. 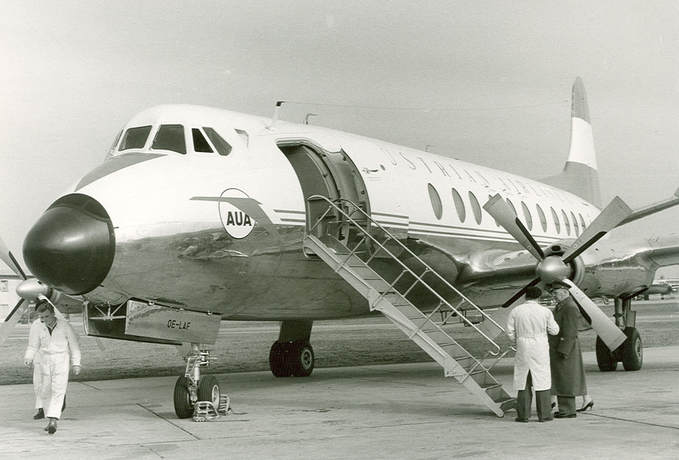 This mould was one of Aeroclassics very earliest and production runs were only in the 50-100 units range. As with all of the very earliest Aeroclassics the models were also decaled rather than Tampo printed and it is a tad unkind to compare these models with the modern Aeroclassics releases. The Viscount however isn't actually bad at all. The shape is a bit rough but pretty good with the mot obvious weakness being a very large seam from the wings to the rear fuselage. Considering the later moulds seam this seam isn't much worse! Ten aircraft were released on this mould and they are very rare, as with all early Aeroclassics.

It wasn't until 2008 that Aeroclassics made a new short Viscount moulding. In general this has a superior shape to the first mould however I would argue the wing/fuselage seam is little better. Though it is smaller it is very obvious and doesn't blend into the fuselage well. Still beggars can't be choosers as nobody else has seen fit to make a 1:400 Viscount. It is certainly a shame that the seam exists and that Aeroclassics hasn't seen fit to remedy the poor fit but given the sales volumes I can understand why they haven't. This seam issue raises its head regularly with Aeroclassics props of this era (like the Connies) however at least their newer moulds (DC-4, DC-6) don't have the same problem. Despite the moulds shortcomings I welcome new releases of the V700 and it is good to see the mould is still in circulation. There are plenty of, especially British, Viscount 700s still to be done.
Aeroclassics v800/v810 Mould 1 (2006-present)

Aeroclassics v800 mould actually appears to predate their second series 700 mould (there was no decaled early generation Aeroclassics v800 mould). It has the same wing joint seam issues as its smaller cousin however also shares all its virtues. There have been thirty eight releases on this mould including in 2015 bevy of BEA and British Air Ferries versions. We're still missing quite a few though, most glaringly British Midland, and there haven't been any more releases in the past 3 years. 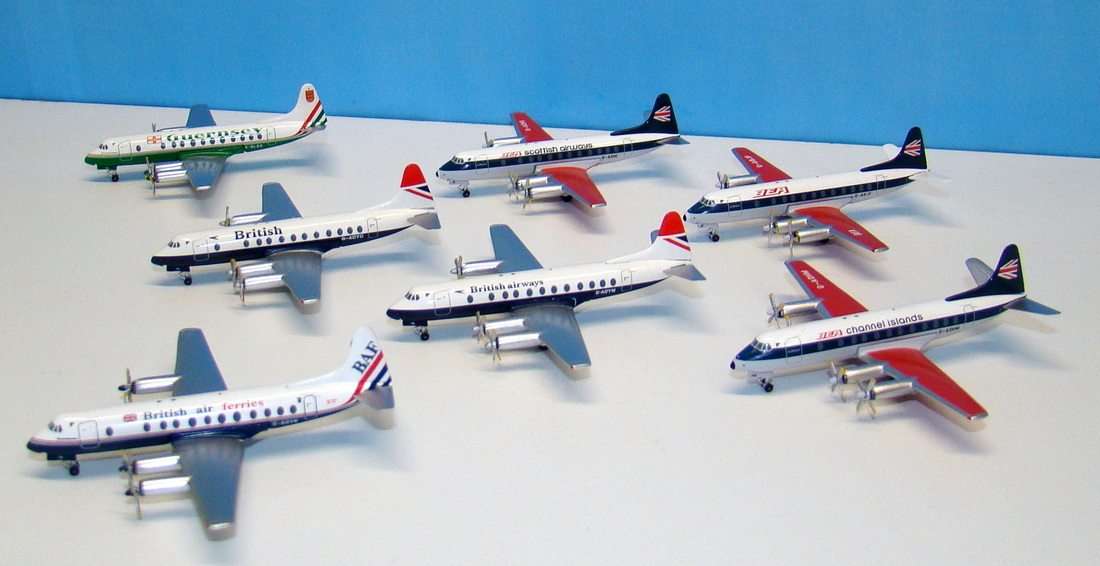