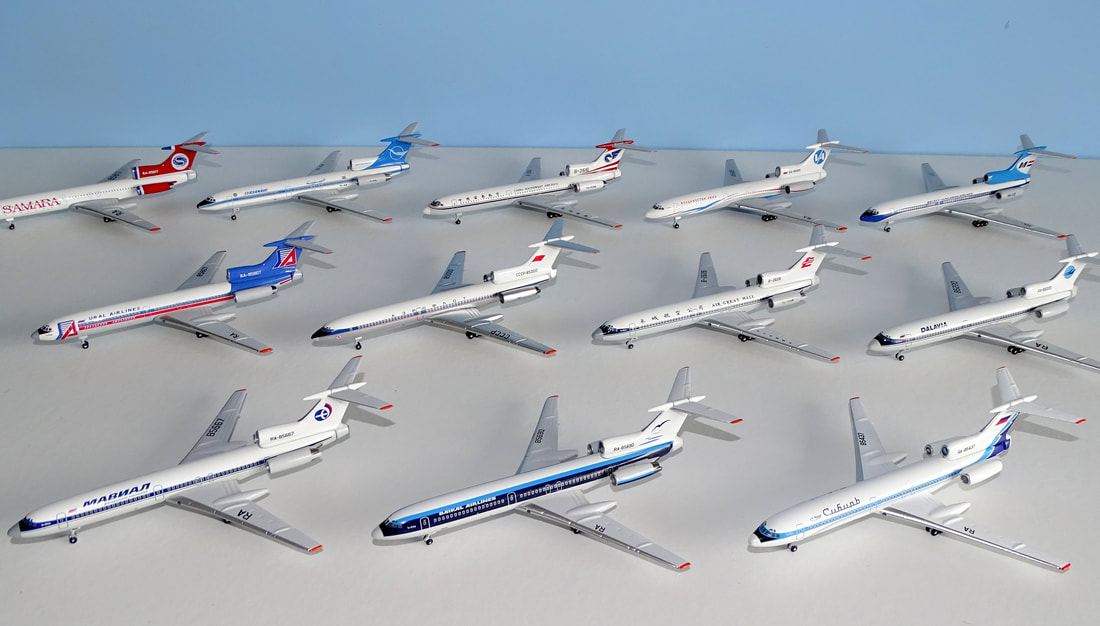 The TU-154 got off to a rocky start, with early versions having serious structural problems with the wings necessitating all Tu-154 'sans suffixe' and Tu-154As getting a completely new pair of wings to a fresh design. However with the TU-154B onwards Tupolev created a rugged, reliable airliner well suited to the often harsh environmental and poor infrastructural conditions found in the Soviet Union and Russia. If quite a few of the 1,026 built have been lost in accidents it would be unfair to point towards the airframe and instead better to look at the operating conditions and often dubious companies operating them. Certainly the Tu-154 was the backbone of the Soviet and Eastern Bloc fleets in the 1980s and survived in substantial numbers well into the 2000s. Even Aeroflot kept the type in service until January 2010, despite its technical obsolescence more than 20 years earlier.

In 1:400 the TU-154 has a somewhat complicated production history due to the Tucano Line scandal. Check out my history of that brand for more details:
The History of Tucano Line
I think everyone was surprised in early 2022 when NG Models announced they would be making their own Tu-154 moulds. The mould is currently at the sample stage and has just arrived at the hangar for review.

As is usually the case with Soviet-era designs there are lots of versions of the Tu-154, however the primary visible differences are between the Tu-154B/B-1/B-2 and the updated Tu-154M version, which are the two groups that have had moulds created for them in 400 scale. The earlier Tu-154 'sans suffixe' has a different thinner HF spike forward of the T tail and both it and the A have a different overwing exit layout, but following the re-winging they are otherwise similar to the B series. Below is a typical Tu-154B:

Pedro Aragão / CC BY-SA 3.0 GFDL
The aim of the M variant was primarily to reduce the type's fuel-burn and this necessitated using the most fuel-efficient engine available - the Soloviev D-30KU-154 (as opposed to the previous Kuznetsov NK-8-2U). The new engines were larger and meant the M received an entirely new rear fuselage aft of the pressure dome. There were also changes associated with the wing.

The primary differences are:
​Below is a Tu-154M:

It was Aeroclassics who originally decided to make a Tu-154 and their mould, which was stolen and copied to make the Tucano Line version - see below. The mould is definitely showing its age but has formed the basis for all other TU-154s since aside from the DeAgostini version and new NG samples. Most Aeroclassics TU-154s are quite hard to come by nowadays and some have suffered from zinc rot.
Aeroclassics made both Tu-154B-2s and Tu-154Ms. In the photos below all of the models are Ms aside from the Sibir, which is a B-2. Unfortunately Aeroclassics only produced a mould with a Tu-154B wing so all its Ms have an incorrect wing.
Ignoring the multiple seams common to such old moulds the primary issue with the mould is the nosegear which is too high. The TU-154 does sometimes have a slight nose-up attitude when loaded but not by this much. Overall most of the mould could do with detail refinement but considering its age it is decent enough. In 2020 Yu ModeLs paid for the rehabilitation of the old mould to active status:
New Tu-154s from Yu ModeLs
They produced a couple of Chinese versions - one of which received a detailed review:
CAAC | Tupolev Tu-154M | B-2609 | YU ModeLs
Aeroclassics also produced a small batch of new releases, which although nice have the distinct feeling of releases dating from well before 2010. Until now, however beggars could hardly be choosers when it comes to Tu-154s. Below are some of the recent releases:
Tucano Line / Golden Wings / Phoenix Mould 1a (2002)

In 2002 a second TU-154 mould appeared, and it was suspiciously similar to the Aeroclassics mould . In fact the main fuselage of the two are the same so its hard to tell them apart - though the tail sections and undercarriage make it much easier to do so as they show significant differences. The first models on this mould were TU-154Ms, whereas Aeroclassics didn't release an M until 2003, which may also account for why the two M versions have different tail units. This is what had happened:

In early 2000s, Andrew Klein commissioned the development of the TU-154 mould. He had a prototype developed, which was good, but not without its flaws. Unfortunately, during that time, a third party (Tucano Line) gained access to this mould. They then developed their airlines off of that prototype mould. The prototype had incorrectly sized engines for an M version. Andrew Klein, instead of releasing the prototype, further developed the mould, fixing the issues such as the intake size of the #2 engine, and also increased the size of other engines. So the engines for these non-Aeroclassics TU-154Ms are not as large as they ought to be."

Tucano Line did not survive this scandal and it's leftover inventory was rebranded as Phoenix Models. Phoenix only used it 6 times (and lent it to Gemini once also) before they updated the mould in 2004. So on this mould a total of 14 models were made. 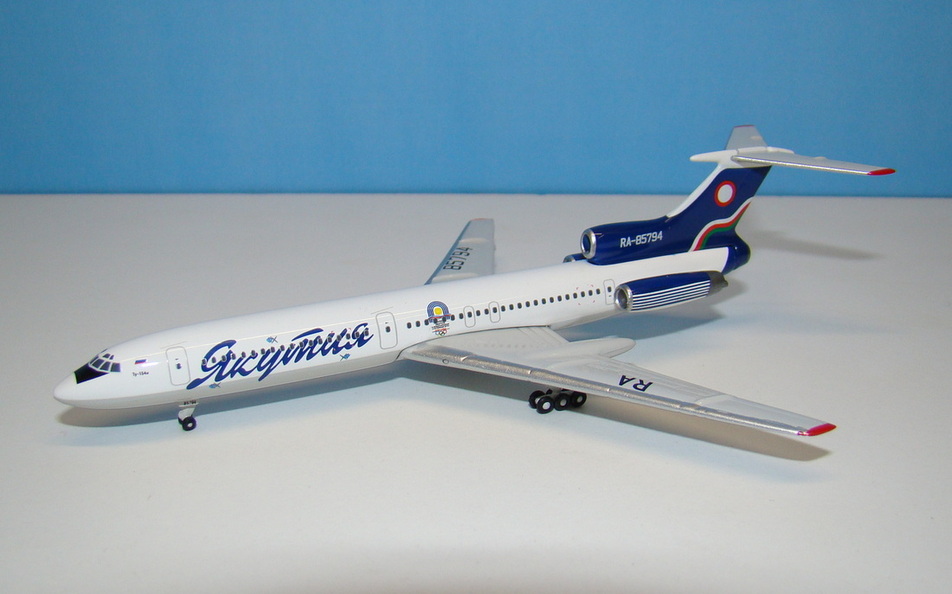 The primary difference between the two moulds is the shorter chunky front gear leg of the Phoenix. The Aeroclassics is too high but the Phoenix appears too low to me. The next Phoenix release would fix this.

Aeroclassics & Phoenix TU-154 Tails
There are also some differences albeit minor in the detailing underneath the two moulds - see lines across wing roots and engine pylon attachments. Note neither have a correct Tu-154M wing. 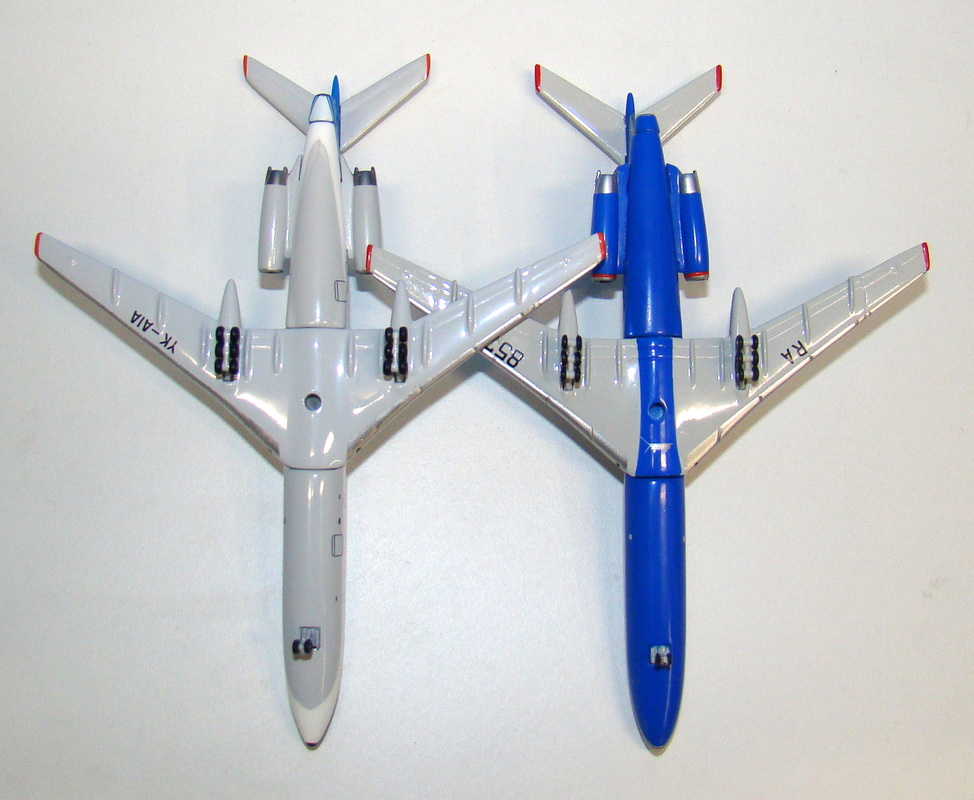 In 2004 Phoenix updated the low nosegear of the 1a mould to create the 1b. This appears to be the only difference and formed the basis of production until the 2011 Eram Air release. That was only 14 models mind. The mould was also used 3 times by Gemini for a total of 17 models altogether. You can see the new mould has a new nosegear leg which is more detailed and higher - though still not as high as the Aeroclassics version.

Aeroclassics vs Phoenix TU-154 Mould 1b (Atlant Soyuz)
The Tarom and Aeroflot versions below give an opportunity to compare the TU-154B-2 with the TU-154M at the rear which relate to the position of the CPU and the bulging middle central intake on the M:

Phoenix have gradually been adding rolling gears to their active moulds. Sometimes this improves them and sometimes it ruins them (see 757). With the TU-154 though it was a definite improvement and also enabled them to recreate the gears completely to create new much more detailed and accurate gear legs. Phoenix dribbled out new TU-154s at one every 3-4 months, so that by December 2014 they'd managed 8 releases. Sadly they have only produced one other and the mould appears to have fallen into disuse. They never did create a Tu-154M wing for the mould.

Phoenix TU-154 Moulds: 1b on left and 1c (old colours) on right
De Agostini / Aeroflot Collection (2020)
The seemingly short-lived De Agostini Aeroflot collection, which managed at least 4 issues, included a Tupolev Tu-154M. As with most moulds by De Agostini / Jet Hut this isn't going to win any awards but it does look like they at least produced a Tu-154M wing judging by the flap track pattern. Ignoring the undercarriage and the mould actually looks passable, but simplistic. 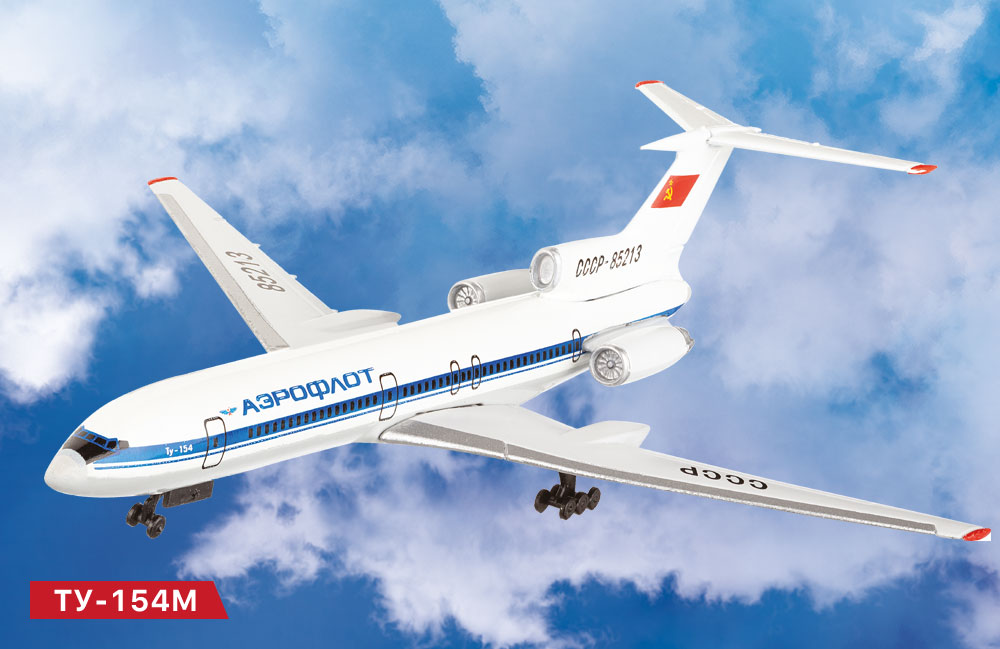 NG Models (2022)
There's no denying that the surprise showing of a photo from NG including a Tu-154M was a major surprise as there had been no discussion about it and little interest from collectors as well. It just shows that model manufacturers make what they want! Nonetheless, a new Tu-154 is welcome and NG are producing both B and M variants. This promises the first high quality mould with a correct Tu-154M configuration in 400scale.
Check out the model sample review here: 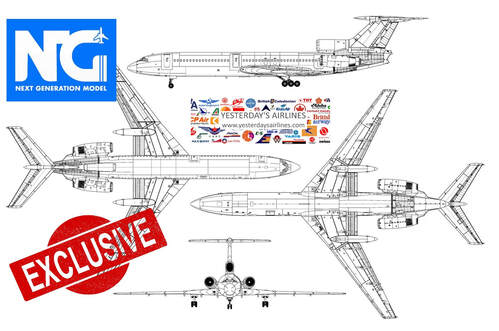