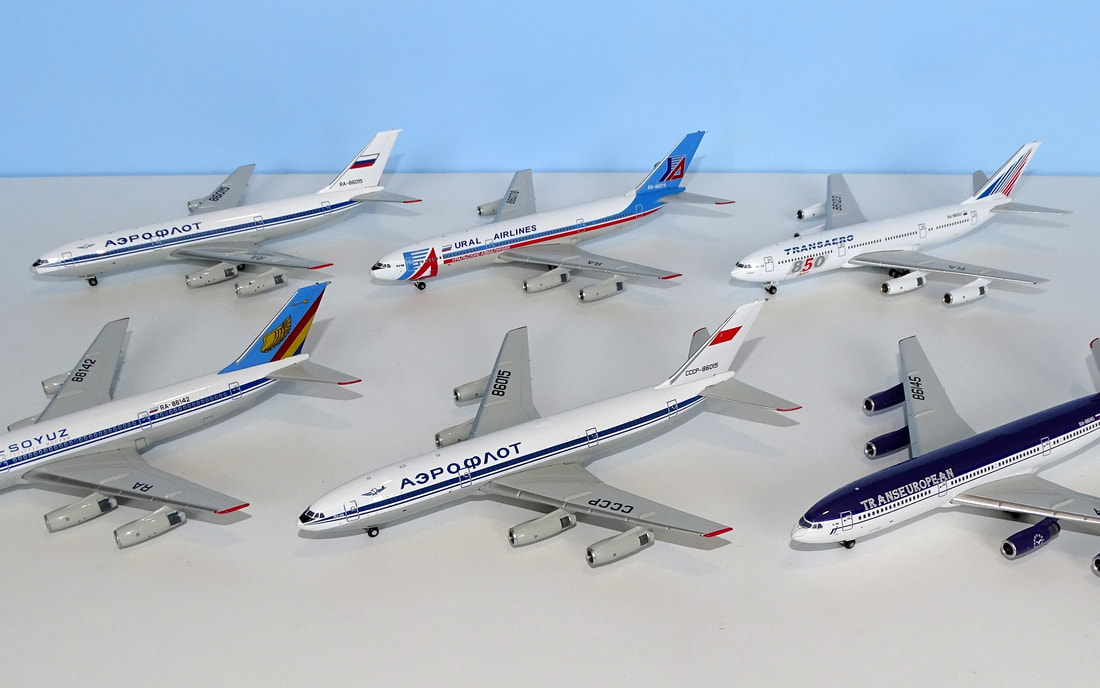 Soviet civil airliner construction was both hindered and helped by the militaristic nature of the USSR. On the one hand it could draw upon a rich seam of bomber and transport aircraft manufacturing but on the other hand the civil programme always came second. Worse the bureaucratic and dictatorial nature of the state destroyed innovation and were major factors in the disparity of technology between the West and the Soviets that was apparent by the 1970s. In particular Soviet engine design was miles behind that of the USA and UK and this factor, more than any other, has destroyed the potential of Soviet airliners since. In any other state the Il-86 and, its later improved brother, the IL-96 probably would never have gotten off the drawing board but despite their shortcomings both have gone on to provide safe, comfortable and reliable passenger service to generations of Russians. 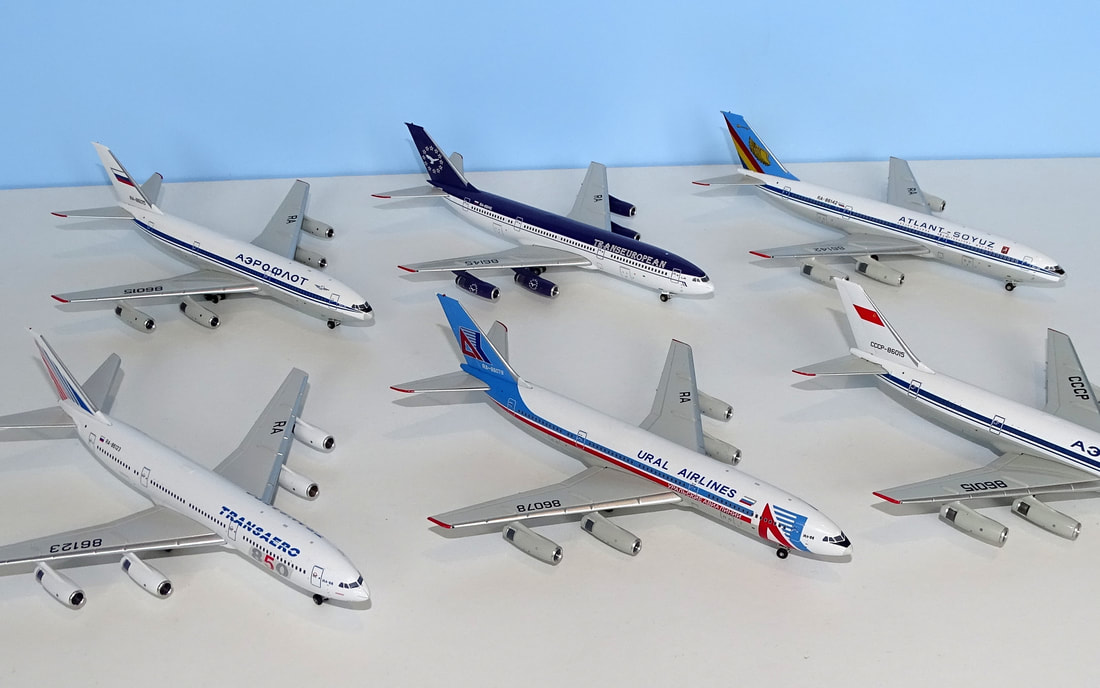 One of the worst failings of the Il-86 was its abysmal range but given the shortcomings of Soviet engines Ilyushin was forced to shorten the airframe to improve it. The result was the Il-96 which had the misfortune to appear just as the USSR was about to collapse. The design includes more modern elements like huge winglets but essentially resembles a shortened Il-86. The Il-96-300 first flew in 1988 and entered service in 1993 however only 23 have been built and its primary use has been as a state transport aircraft. Aeroflot did however get good use out of its Il-96s which weren't retired until April 2014.

Obviously with limited production runs there are relatively small numbers of schemes that can be made for each type, so it is little surprise that in 400 scale there is only a single mould for each of the Il-86 and Il-96. This isn't be much of a problem as long as the moulds get used and for the Il-96 that hasn't been a problem. Alas, for the Il-86 releases have been few and far between. 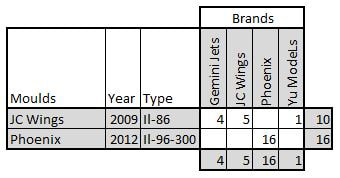 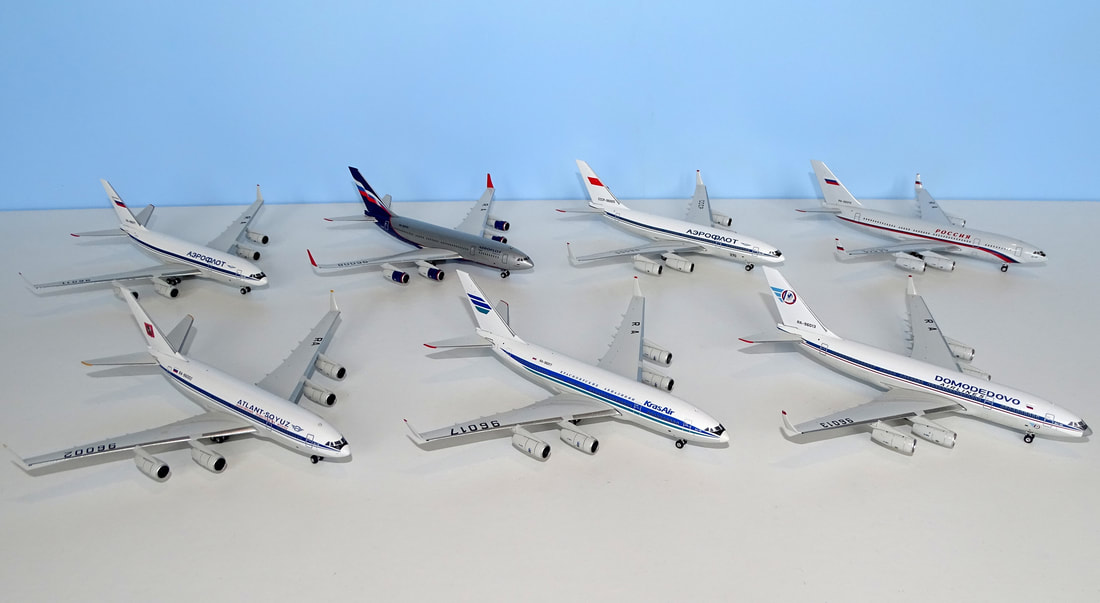 Usage has been a little sporadic of both moulds but after not releasing any IL-96s since 2013 Phoenix released one in 2018 and now three in 2022. The IL-86 hadn't been used since 2011 but now in 2022 the mould is back and being used for at least one release from Yu ModeLs wearing the China Xinjiang delivery scheme:

The Il-86 Camber has a very unique appearance, with a very chubby fuselage, short undercarriage with central maingear leg and four long thin engines. Note also the passenger entry door on the lower left side of the fuselage. 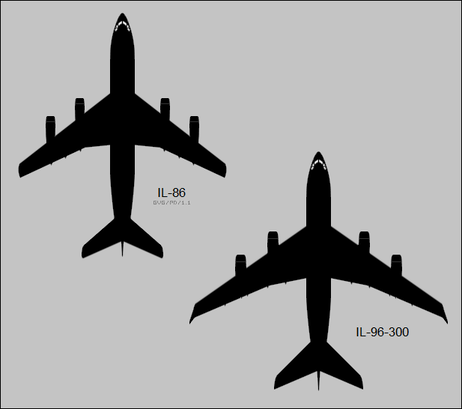 Greg Goebel, Public domain, via Wikimedia Commons
The Il-96 was effectively a shortened 86 exchanging size for range (as with the Tristar 500 and 747SP) with a new wing complete with huge winglets.

Mark Tang (GFDL 1.2
A second variant the Il-96M / Il-96-400T is a variant stretched by 10 metres and fitted with western avionics and engines. Sadly it was still clearly inferior to western types like the 767-300 and has only been produced as a freighter known as the Il-96-400T. Only four aircraft have been built and it isn't likely to get a 1:400 release anytime soon. A passenger version known as the Il-96-400 with Russian avionics and engines has been mooted but unlikely ever to see the light of day. 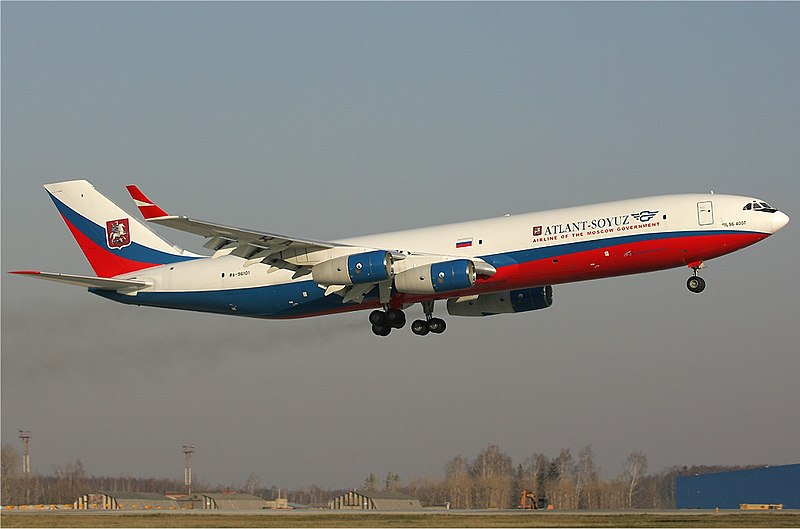 This is an excellent mould perfectly capturing the slightly rotund look of the type. Production began in 2009 and several interesting airlines were produced, however in recent years JC Wings has stopped using its most interesting moulds and reverted to making primarily modern types. In fact the wonderful Il-86 was used by JC Wings only 5 times whilst their partner Gemini Jets has used it 4 times. No Il-86s had been made since 2011 however the new Yu ModeLs released that has been announced suggests there is the possibility we may see more.

Like the Il-86 the Il-96 has benefitted from an exceptionally good mould - this time produced by Phoenix. In fact despite the vastly smaller production run of the real aircraft and a much smaller pool of potential operators there have been more Il-96s produced in 1:400 than Il-86s. The first examples weren't produced with aerials but most of the releases include what was originally Phoenix's innovation.