The intention of this page is to describe and show all the Trans World Airlines liveries from 1946 to the American Airlines takeover in 2001. Schemes prior to World War Two are not covered.
1940s-1950: TRANSCONTINENTAL (TRANS WORLD AIRLINE) / TWA POINTS THE WAY 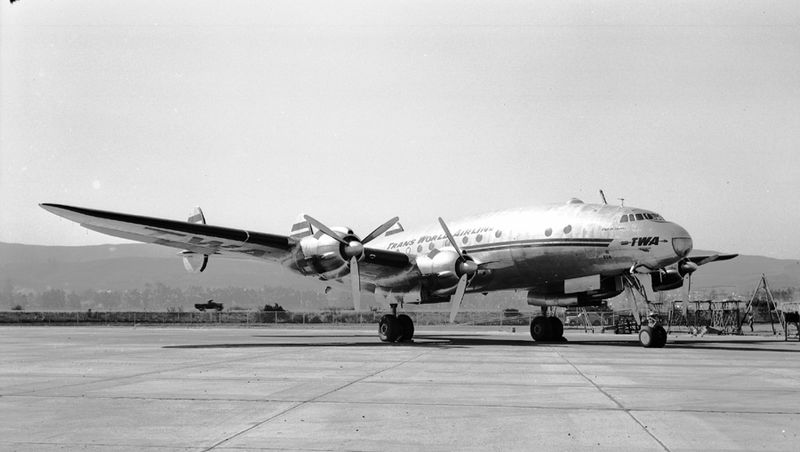 An L-049 with the arrow logo. Bill Larkins [CC BY-SA 2.0 (https://creativecommons.org/licenses/by-sa/2.0)]
1950-1952: NATURAL METAL JETSTREAM
On May 17, 1950, the airline officially changed its name to Trans World Airlines. The titles across the fleet were updated and this scheme was worn by the new Martin 2-0-2s plus the short Connies and remaining C-54s.
1952-1959: WHITE TOP JETSTREAM
The delivery of the first Martin 4-0-4s and Lockheed L-1049 Super Constellations heralded the arrival of the white crown, increasingly popular with US airlines in the early 50s. Otherwise the scheme stayed roughly the same on the later Super Gs and the Starliners (i.e. Jetstreams as TWA called them).
1959-1962: ARROWHEAD / JET DELIVERY
The design is fresh but simple and was applied to the new Boeing 707-100s/300s, Boeing 720s and Convair 880s. I don't believe it was ever worn by any prop-liners.
1962-1975: TWIN GLOBES
The L-1011s would wear two slightly different versions of the scheme. From N31009 onwards (10th A/C del.) a 2nd Red "1011" was added to the #3 engine nacelle (there was already a hard to read version on the metal belly forwards). This necessitated the movement of the aircraft registration.

1975-1979: TWIN STRIPE (HOLLOW TITLES)
1979-1995: TWIN STRIPE (SOLID TITLES)
This was the scheme that first 747SPs, 767-200/300s and MD-80s would be delivered in and also the scheme that Ozark's DC-9 and MD-80 fleet would transition into following the takeover of TWA's St Louis stablemate.
Around 1989 TWA began to drop the black anti-glare mask ahead of the cockpit. Also increasingly black stripes were painted onto the wings. The latter were a safety measure designed to allow easier visibility of ice build up. I'm not sure why TWA took them up when most other airlines didn't.
1980: PROJECT SKINNY
In 1980 TWA became one of several airlines that investigated a bare metal scheme, presumably looking at the cost savings it could achieve from the weight reduction. With the white only left between the red twin stripes and around the red tail titles it actually looked quite a bit like an American Airlines hybrid. The scheme was applied to only one 727 (N64339) but ultimately was not selected for implementation. 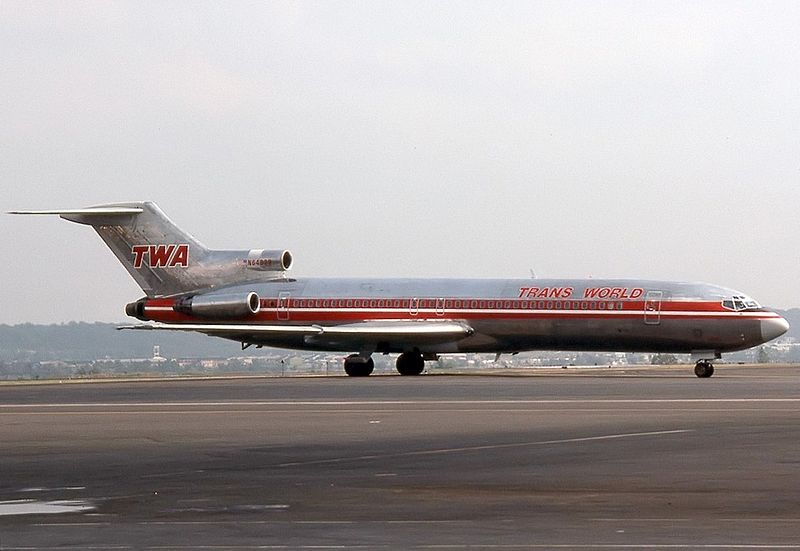 Jon Proctor [GFDL 1.2 (http://www.gnu.org/licenses/old-licenses/fdl-1.2.html) or GFDL 1.2 (http://www.gnu.org/licenses/old-licenses/fdl-1.2.html)]
1986: OZARK HYBRIDS
Following the acquisition of Ozark Airlines in 1986 some of their DC-9s were temporarily repainted into a kind of hybrid scheme. The lower stripe structure of the Ozark scheme was switched from green to red and the Ozark tail rhombus easily switched for the TWA one. The upper green stripe was removed and full TWA titles added. The result was a scheme that actually was quite close to the twin stripe but with an obviously different lower stripe arrangement. I'm not sure how many Nines wore this but at least N981Z and N985Z did. In fact the latter was still wearing it in 1989.

Photo by Reinhard Zinabold
1994-2001: WINGS OF PRIDE
EI-BWD was a special MD-80 in that it was the employees who gathered together to raise the aircraft's leasing fee as a symbol of defiance and solidarity. To honour this the aircraft wore an inverted version of the standard twin stripe. By March 1999 the aircraft had been repainted into almost standard TWA new colours but with a new logo on the forward fuselage.
1995-2001: GLOBE
1996-2000: ST LOUIS RAMS 727
As supporters of the St Louis Rams NFL team TWA painted one 727, N64347, in special colours with a giant football helmet on it.