​Q1: WHAT IS YOUR AGE RANGE?
The answers to this question fill me with hope for the scale as the age of collectors is nicely segmented across the age ranges, with over 33% being under 25 and nearly 50% being under 30. This makes me think that not only is 400 scale attracting new younger collectors but that the hobby has a long future ahead, despite the lure of gaming and such. Although possibly over-represented on the forums those 45 and over represent around 30% of collectors answering. This question was optional but only two people declined to answer it.
This question also gives an opportunity to try and determine patterns of collecting based on age ranges, which I'll try and explore when looking at collecting criteria.

​Q2: IN WHICH REGION DO YOU LIVE?
This question mattered mostly to see a) if 400 scale collecting is a global thing and b) to see if the survey results are under-represented in a specific region. Unsurprisingly English speaking places are better represented so I suspect that Latin America at 6.4% is under-represented substantially. Nonetheless, both mainland Europe and Asia both get good representation, although no doubt a lot smaller than the markets probably are in these regions. Certainly it appears 400 scale is popular throughout the globe, with Africa's under-representation probably being a mixture of language and audience size on the platforms I'm using to ask for votes.
​Q3: HOW MANY MODELS ARE IN YOUR COLLECTION?
This question didn't offer up many surprises with 38.1% of people collecting in the 100-500 model range but 41.3% collecting less than 100 models. Presumably a lot of the smaller numbers are due to the age of the collector but it also suggests that even when acquiring stats from platforms likely to have almost all the world's largest collectors engaging with them that only around 20% of collectors ever get into serious (500+) numbers of models. That 20% probably account for a disproportionate number of sales, especially from the more niche brands like Aeroclassics with limited distribution pathways.

Q4: HOW MANY MODELS DO YOU BUY A MONTH ON AVERAGE?
Despite there being around 50 400 scale model releases per month most collectors only buy one or two models per month, which given the no doubt widely varying economic situations of people and the ever increasing cost of the models is not a big surprise. Also note how the 17% buying 6+ models per month ties quite closely to the 20% with 500+ model collections.
Q5: HOW LONG HAVE YOU COLLECTED 400 SCALE?
The results of this question combine quite nicely to suggest a scale in good health that is attracting good numbers of new collectors and retaining a core of long term collectors too.

Q6: WHAT IS YOUR COLLECTION CRITERIA?
This question was multi-select and so the number of responses was a lot more than 470. In its most simple form the results are as follows: 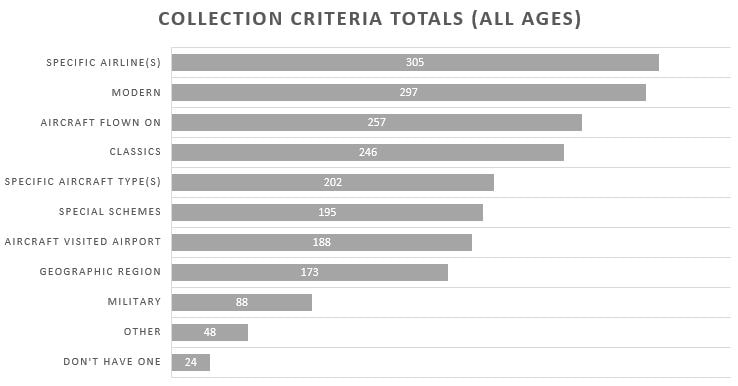 Responses in the other category were variable and often included things that fitted in the existing categories anyway. These callouts are worth making though:
Someone put 'Basically anything that DOESN'T come to Toronto', which was interesting. They must really dislike Toronto?
COLLECTION CRITERIA BY AGE RANGES
Filtering the collection criteria results by age provides some interesting comparisons. I found that merging the 6 age ranges into 3 made little difference to the results for them and provided a better sample size. This is the result of that: 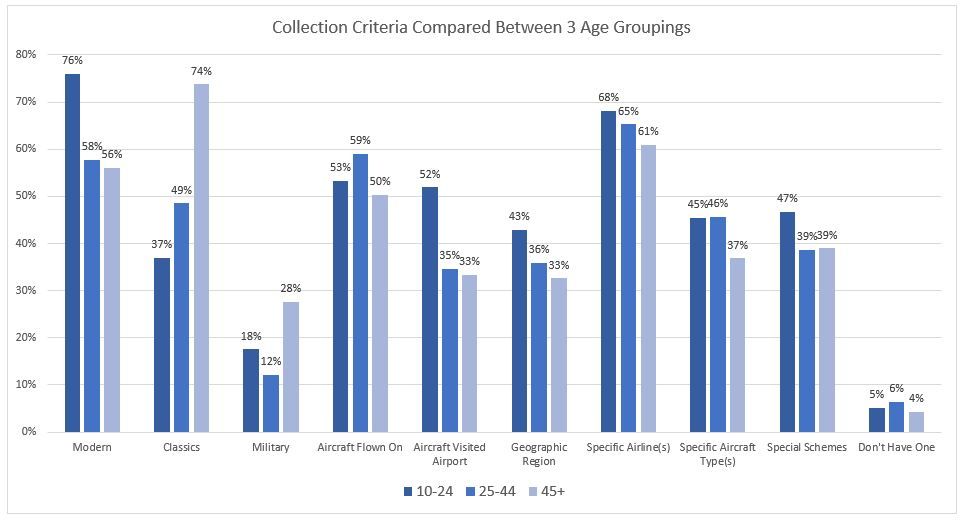 Q7: HOW MANY OF YOUR MODELS DO YOU HAVE ON DISPLAY?
Where 1 was none and 5 was all it looks like the majority of us try and get everything on show:

Q8: DO YOU HAVE A MODEL AIRPORT TO DISPLAY YOUR MODELS ON? 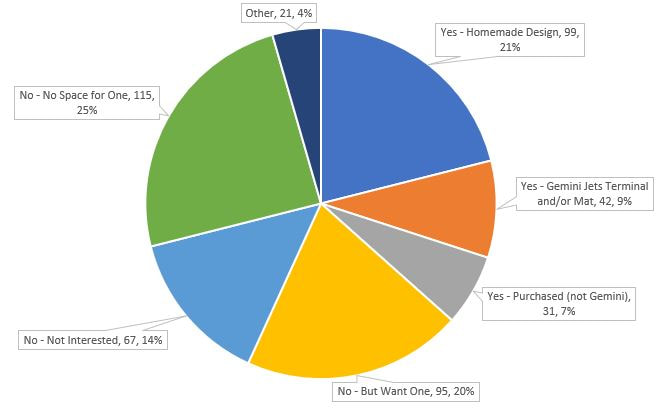 Q9: ARE YOU INTERESTED IN ACQUIRING GROUND SERVICE EQUIPMENT?
The answer here was comprehensive. 62% of people wwere interested and 21% might be interested. GSE is currently hard to find and costly. Although there have been a number of individuals start up recently using 3D printing they do not produce the bulk that the market appears to want and even more adventurous companies FantasyWings produce relatively little. This seems like a niche that is waiting to be filled with a good variety of GSE - both modern and classic. 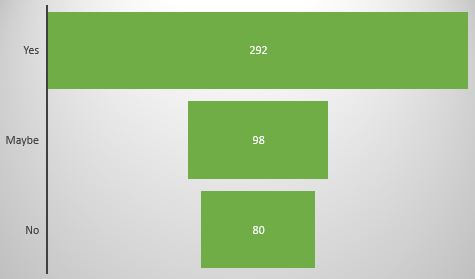 SUMMARY
I'll take a look at the remaining 10 questions in the next part of the results, however the results so far show a hobby that is doing well and a collector base that is gaining new collectors and supporting them across their lifetime in a way that keeps plenty of people engaged.

In the next part we'll see what people think is most important to them in terms of model attributes and what the next moulds they want to see are.