Certainly of the seven types of short 707 the 1:400 manufacturers have struggled a bit to find a way to economically produce effective representations of them.

Additionally the model history of these similar but separate types has been clouded substantially by Aeroclassics and Dragon Wings usage of the same moulds to at times represent different variants of short 707. This is more acceptable at times than others and I will split the review out by type rather than necessarily mould to highlight these usage patterns.

For any discussion of the complicated differences between marks of 707 I recommend David Hingtgen's masterful 'Ultimate Boeing 707 Guide' which can be found here.
Here's a full breakdown of the models made. Note that often the same mould is used to replicate various versions: 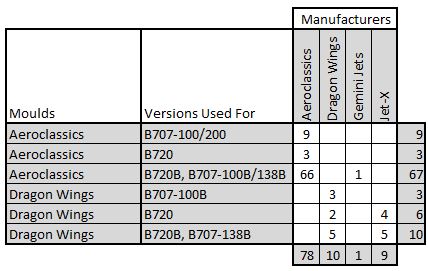 Only one manufacturer has produced a turbojet B707-120 and that was Aeroclassics way back in 2002. They made 9 aircraft (American, Braniff and Western examples) but unfortunately they used their larger series 320/420 mould to do it. This mould is passable (though not a patch on their later series 320B/C mould) but obviously far too long. Not only this but the series 120 had a different wing to the 320/420 without the rear edge kink in it. The ventral fin is also far too small to represent a 707-120. I have to say therefore that this mould is a total fail as a series 120. Although I understand Aeroclassics reluctance to make a mould specially for the type given its limited production run it is disappointing nonetheless.

This is especially so because obviously the type has such high historic importance. Maybe one day we will see a 707-120 mould (it'd be even better to have a version with the short initial tail and no ventral fin - see TWA photo above) but I don't hold out much hope sadly.

The Boeing 720 is a lightweight short-medium range version of the 707-120 designed primarily to kill Convair 880 orders - something it did very well. The aircraft itself is about 2.54m shorter than a standard 707-120. In addition the 720 had turbocompressor humps only on the inboard engines and a smaller rear ventral fin than the original 707-120s. Lastly Kruger flaps were added to the wing leading edge and there was a wing glove fitted inboard of the engines also. The wing glove was actually later fitted to 707-120Bs also.

In 1:400 there have been quite  a few Boeing 720s made. There have however only been two moulds, with Aeroclassics producing Gemini's sole example and Jet-X using Dragon's mould. There has however been several variants of the standard moulds to take into account aspects of the 720 design history and mould update.

Here's original B720 in real life:

And the Boeing 720B Turbofan version:

This mould has formed the basis for the vast majority of short 707s and Aeroclassics has used it at times to represent 707-123Bs and 707-138Bs (see later). It is an excellent mould in its original form of which Aeroclassics made 23 models from 2003-2005. The fuselage, tails and wings are very good and the whole plane has the slightly nose high attitude of a 720B. If there is to be criticism it should probably be aimed at the turbofan engines which don't look quite right or well enough detailed for my liking. Aeroclassics also had two tails available for use - one with the HF antenna and one without. Note that the turbocompressor humps are correctly situated only on engines 2 and 3.

Dragon's mould came out in 2004 but has seen very limited usage. The fuselage and undercarriage are pretty good although the wing/fuselage seam is much more obvious than on the Aeroclassics. The wings and tails are shaped well but the detailed markings on both are too deep and obvious. Dragon did make a United Airlines example (correctly without the HF antenna) which is a turbojet 720 as well as turbofan 720Bs for Continental and Northwest. The turbofan engines and pylons look good however the turbojet engines hang too low due to oversized pylons. they did however get the pylon length correct on the outer pylons - something Aeroclassics didn't (see below). Jet-X used the mould four times in 2005 for Braniff Flying Colors examples.

In the photos below the United is a turbojet B720 and the Northwest and Continental are turbofan B720Bs:
Aeroclassics Boeing 720 Turbojet (2007)

AC modified their excellent 720B mould in 2007 with new wings and engines to cater for the original turbojet Boeing 720 though they only made three examples. This is probably because the modifications weren't a success. Either the outboard engine pylon is not long enough or the engines are too long (probably a bit of both) but either way it clearly doesn't look right. This is a shame as there are lots of early 720s that could be made especially a United example.
Comparison of the Aeroclassics and Dragon Turbojet 720s: 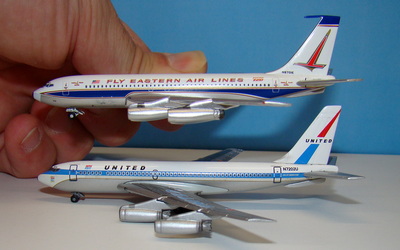 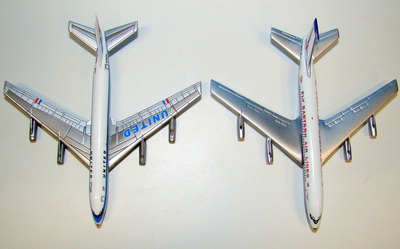 In 2009 Aeroclassics updated their original 720B mould with rolling gears and they have used it on and off ever since. The mould itself remains the same however the update hasn't been a complete success as the new nose gear is a bit too small (as with their A320s) which makes it look a bit odd.

The 707-120B incorporated new turbofan engines but also most of the changes introduced by the 720B - i.e. wing root glove, kruger flaps, less turbocompressors, small ventral fin and vertical stabiliser extension. The turbofan 707-120B is effectively a stretched version of the 720B and doesn't bear that close a look to the original 707-120.

Amazingly Dragon actually produced an accurate mould for the 707-120B - in fact it is the only accurate fuselage length 707-120/120B available anywhere. Its slightly annoying therefore that they have used it only three times. It suffers from the same issues as their 720 mould however it is still pretty good all round and the length difference between it and the 720 is quite noticeable.
Aeroclassics Boeing 707-120B Mould (2005)

Aeroclassics just reused their 720B mould for the three 707-123Bs they have made (one is listed as a 720 in the database). It is accurate except for the length (2.54m too short). Again I can understand why they didn't want to make a new mould but am still disappointed nevertheless. The model below is one of the few Aeroclassics releases lacking an HF aerial on purpose. Many 707-120s did lose their HF aerial during their careers.
Here's a comparison of the correctly scaled Dragon mould against the too short Aeroclassics: 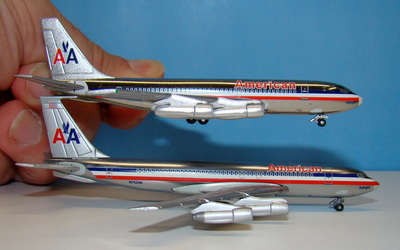 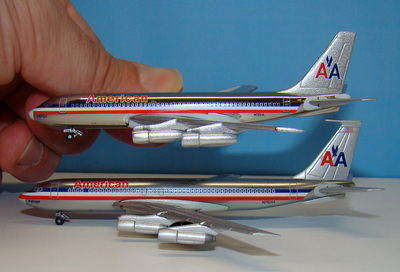 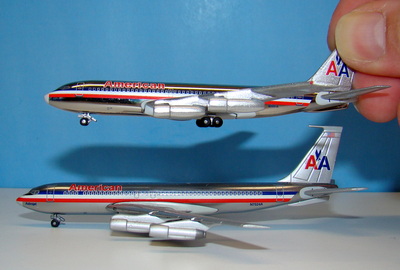 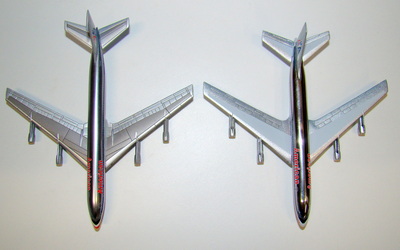 Only ten long-range 707-138/138Bs were built, all for Qantas. It is only twenty inches shorter than a Boeing 720 but in turbojet form there are lots of other differences since it is basically a 707-120 shortened. Nobody has made a turbojet 707-138 which is understandable seeing as not even all ten of Qantas aircraft were delivered as turbojets. The turbofan 707-138B got all the updates that the 720B pioneered so aside from being 20 inches shorter and with a turbocompressor on engine 4 it is nigh identical.

For that reason both Aeroclassics and Dragon reused their 720B mould for their 707-138Bs. However the one big difference between the two is that Dragon (because of their design method attaching the engines to the wings separately) has been able to have the turbocompressor hump on the fourth engine. Nice touch!
Dragon Wings/Jet-X Boeing 707-138B Mould (2004)

Dragon have made a Boeing demonstrator and a Qantas aircraft. Jet-X reregistered their Braniff 720s to make 5 Flying Colors variants.
Aeroclassics Boeing 707-138B Mould (2004) 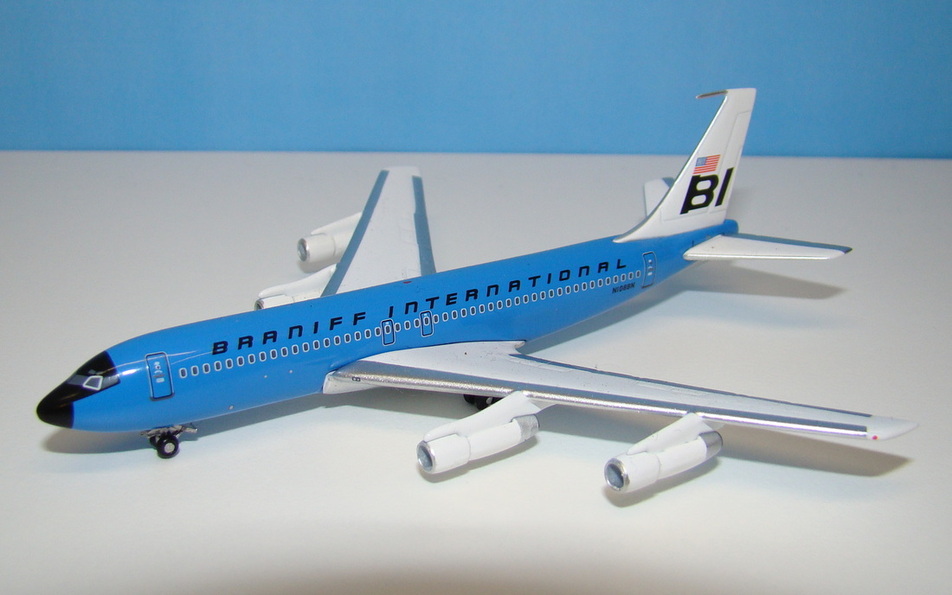 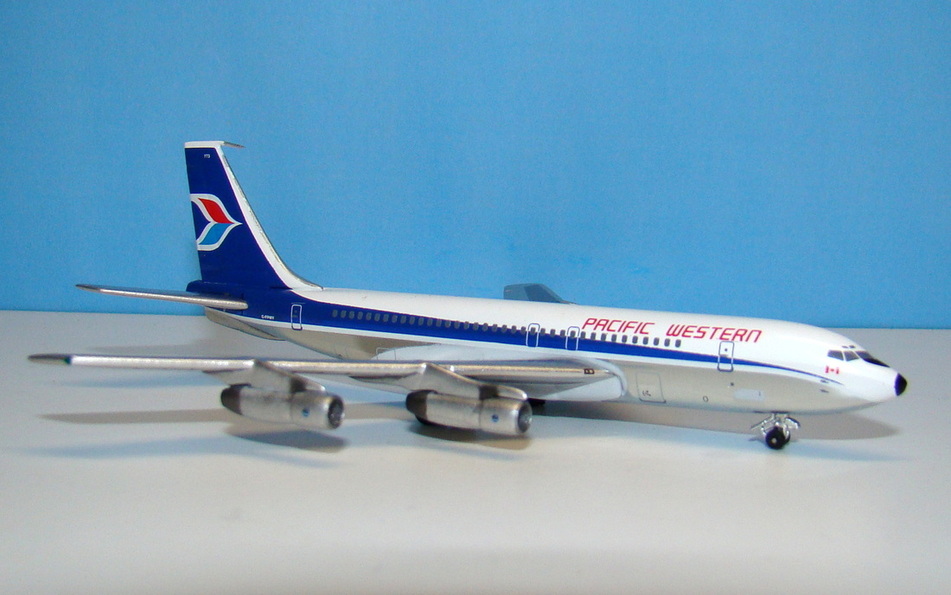