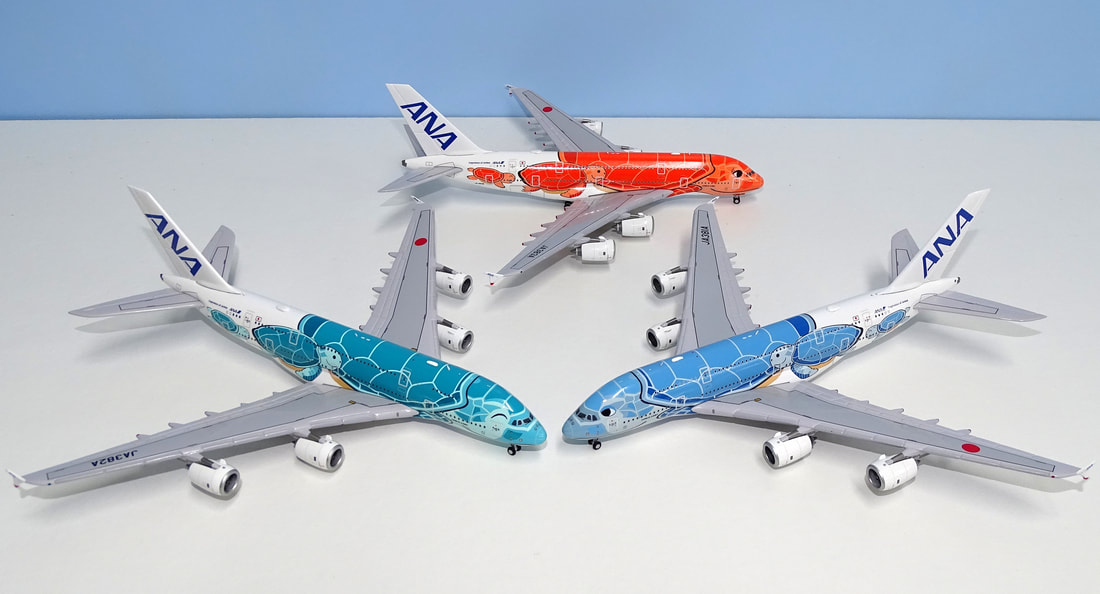 The A380-800 has failed to hit its targets in terms of aircraft deliveries but the type remains a spectacular achievement and impressive unique airliner. As of July 2021 there are only 3 A380s left to deliver, all of which are for Emirates, with the last scheduled to be delivered in May 2022. Meanwhile, parting out of the first A380s began in 2018. The first 5 aircraft for launch customer Singapore Airlines, all 2006 and 2007 build frames, have now been scrapped or are being scrapped. Unfortunately although two of these saw some service with the wet lease specialist Hi Fly Malta, it appears there is little secondary market for A380s. Total production of the A380 has run to only 251 units and 120 of the 248 that have been delivered serve with Emirates. 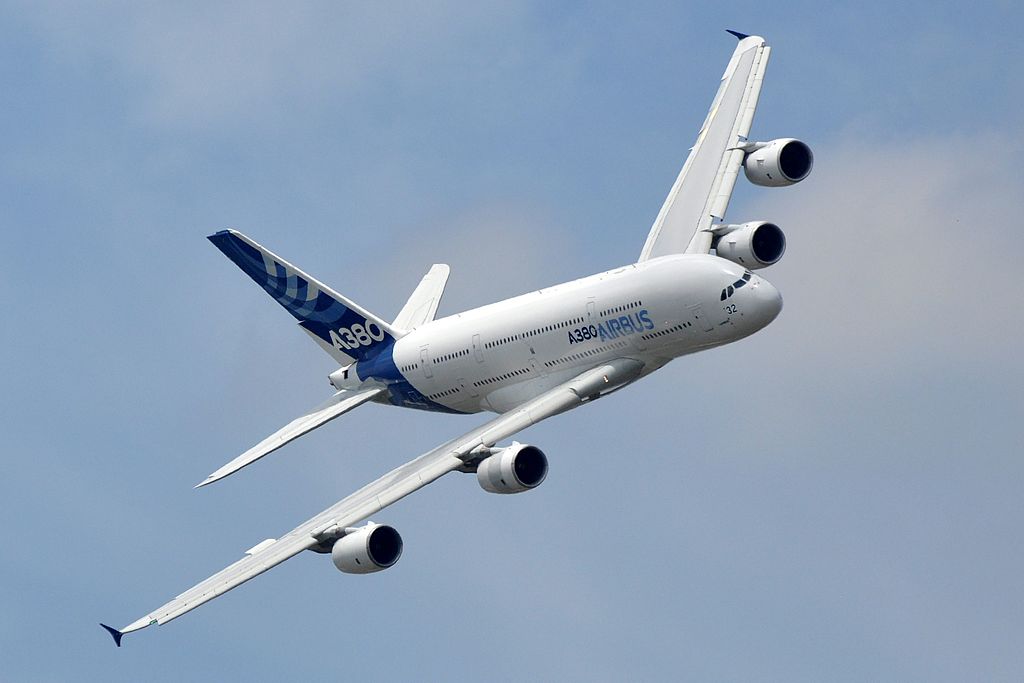 The prototype flying in June 2015. Eric Salard, CC BY-SA 2.0
The relative failure of the A380 has been due to several factors. Firstly there are only a small number of hub-hub routes that can support the type and even on these slot congestion has not proven to be bad enough to require many airlines to upscale to the A380. Secondly filling such a large capacity airliner requires airlines to reduce the cost of some seats reducing the yield and profitability of the services. Thirdly business customers prefer frequency and together with increasingly fuel efficient big-twins (like the 787-10 and A350) it is much easier and less risky to use smaller aircraft more regularly.
This has meant that the number of A380 operators has been small, as although the type has been perfect for Emirates, even other major airlines have struggled to justify the type. In the end only 14 airlines took delivery of new A380s and several of these have regretted the decision. Covid has of course been a massive problem for worldwide aviation and has disproportionally impacted the huge A380, which of course is more vulnerable to market downturns, which of course Covid has caused the most massive in history for aviation! 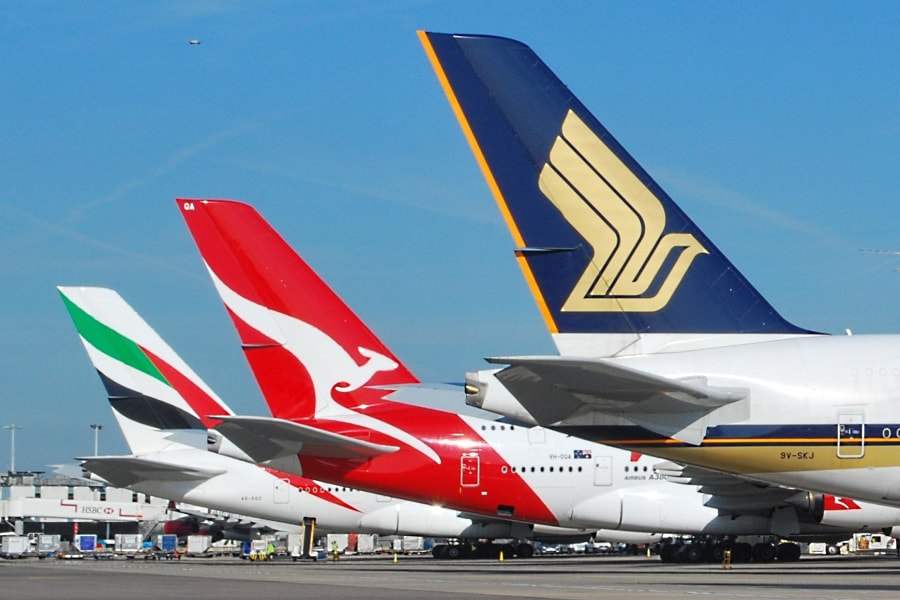 Simon Boddy, CC BY-SA 2.0
Several of the airlines already struggling with their A380s (Air France, Etihad, Malaysia, Qatar Airways, and Thai Airways) have retired them permanently while even Lufthansa, who would probably have kept them in service without Covid, has retired its fleet. That leaves the remaining operators of the type as Singapore Airlines, Emirates, Qantas, Korean Air, China Southern, British Airways, Asiana and All Nippon Airways.
All Nippon itself is something of a reluctant A380 operator and in this article we'll take a look at why that is and what ANA has been doing with its trio of Flying Honu.

Skymark, Airbus and the ANA A380 Order 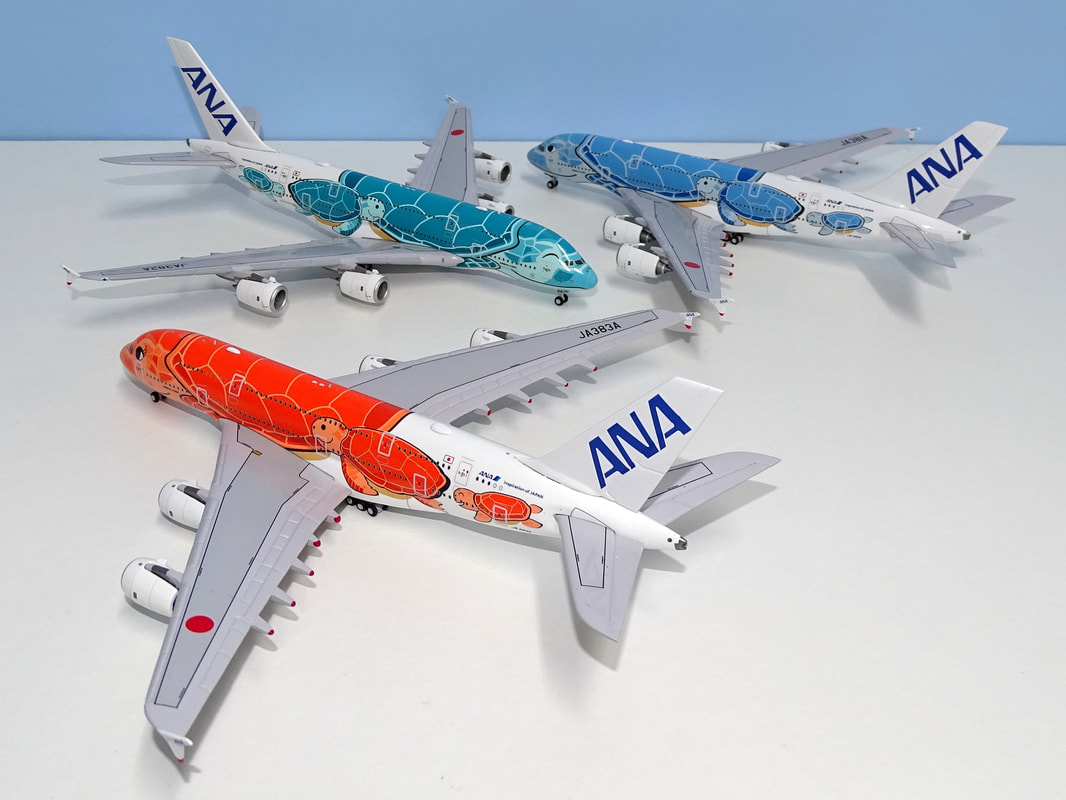 The pathway that led to All Nippon acquiring the A380 was tortuous and the Japanese airline was far from keen on the type but in the end was reluctantly forced into it. The backdrop to the deal goes back to the declaration of bankruptcy by Japanese competitor Skymark Airlines on January 28, 2015. Skymark had struggled to introduce an A330 fleet and on top of that had ordered five A380s, which it could ill afford. The first of these had already flown when Airbus became a major creditor in the future of Skymark. In fact Airbus accounted for 29% of Skymark's debt and the engine manufacturer Rolls-Royce a further 16%.
Below: Two of the Skymark A380s stored at Toulouse in March 2015 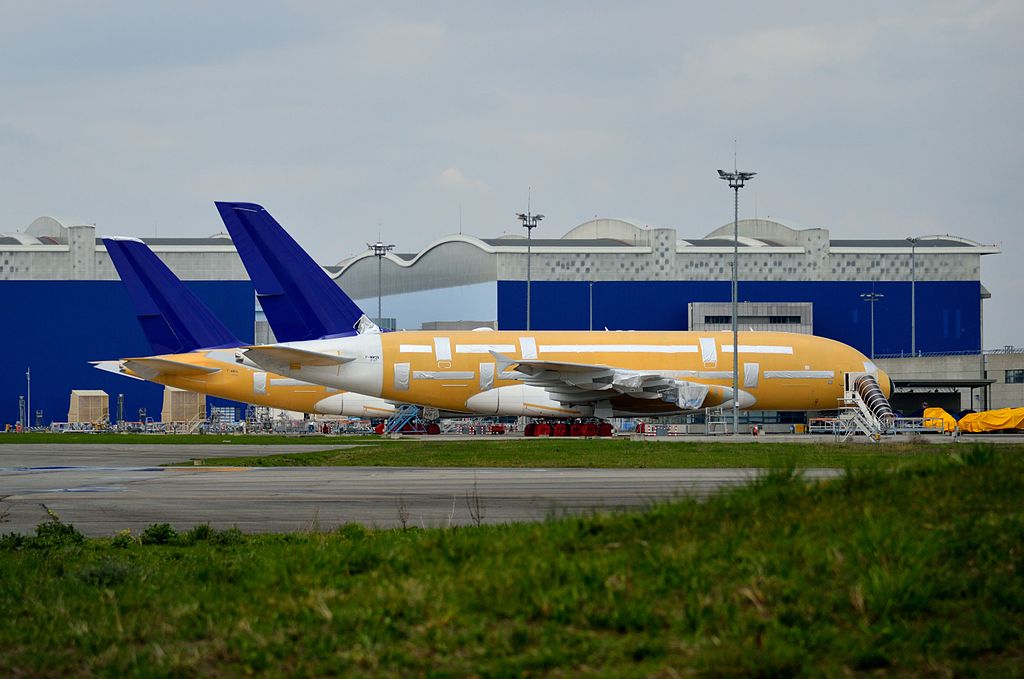 Gyrostat (Wikimedia, CC-BY-SA 4.0), CC BY-SA 4.0
Skymark itself as an ongoing business was of little value, however its license and 36 daily slot pairs at the important Tokyo Haneda airport made it a valuable asset and attracted various suitors. These included All Nippon, Delta, Hainan Airlines and Jetstar. Airbus, obviously struggling to sell A380s, was not keen on any deal that didn't include at least some of the A380s but All Nippon had no interest in any plan that involved taking either these or A330s. 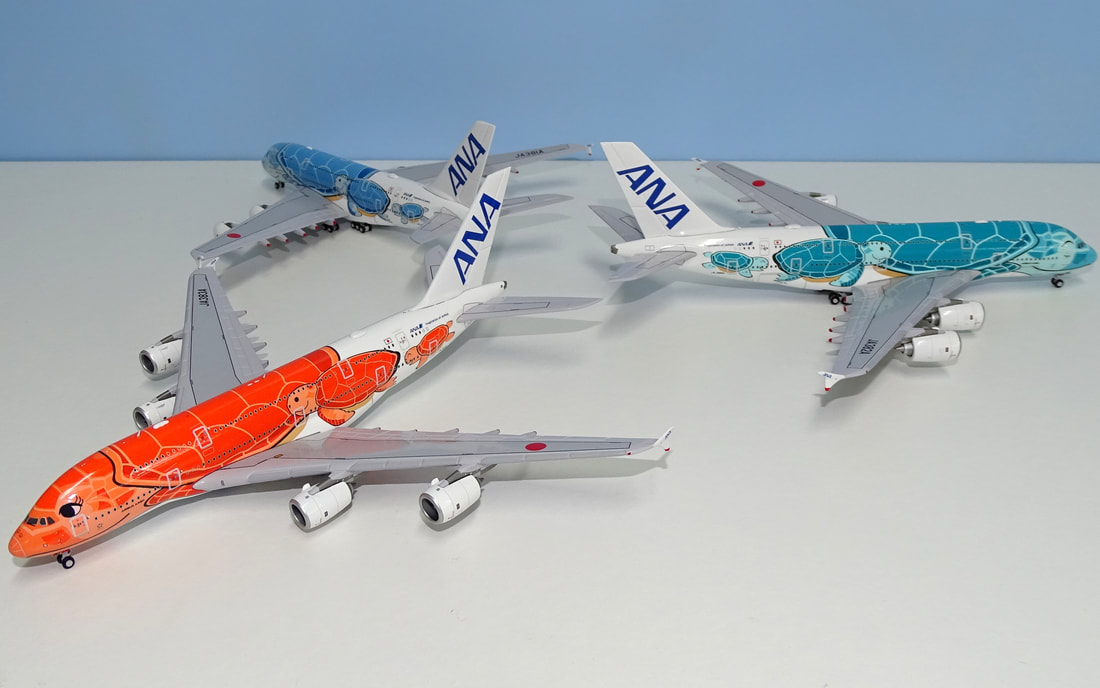 In the end it came down to the lesser of two evils. Was All Nippon willing to let a major competitor like Delta gain a foothold at Haneda or would it accept a deal with Airbus in order to get the backing of Airbus, since it was the Skymark creditors that needed to vote on the future of the bankrupt airline.
Airbuses statement that: "If Skymark submits the plan (that involves ANA's sponsorship), there is a significant and realistic risk that it would not be able to gain the support of major creditors, including Airbus" was a strong enough nudge to pull All Nippon into line. In the final creditor's vote on August 6, 2015 Airbus switched sides and supported the ANA bid rather than the Delta one. Soon afterwards in December 2015, All Nippon ordered 3 A380s - all of which were originally destined for Skymark. 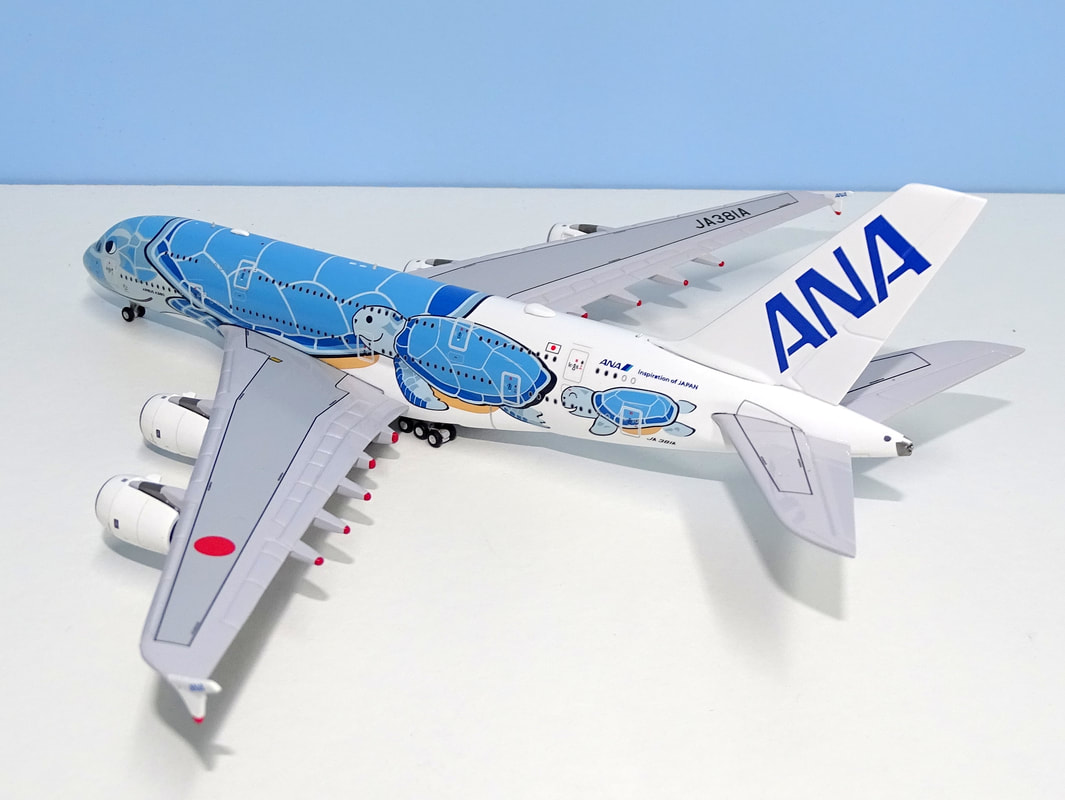 ANA's first A380 JA831A
So the end result was that All Nippon gained control of Skymark and the slots but also had to buy 3 A380s it didn't really want or have a need for. Now it just needed to find a use for them, as three of the huge jets was not enough to operate anything but a specialist service with.

All Nippon needed to find a use for its newly ordered sub-fleet of only 3 A380s. Although the airline once operated plentiful 747s on domestic routes those days have long gone and ANA's general strategy has been to use smaller 777s and 787s on international routes where there smaller size allows higher frequency on trunk routes and non-stop service on thinner routes. Additionally ANA is Asia's highest cost airline, which limits how cheaply it can give seats away - not ideal when you have to fill an A380. Plus with two Tokyo airports (Narita and Haneda) and international slots at Haneda allocated by the government it is difficult for ANA to redeploy its slots with the freedom to operate the A380s. Lastly the A380 demands its own crew and maintenance services with no commonality with ANA's Boeing fleet. 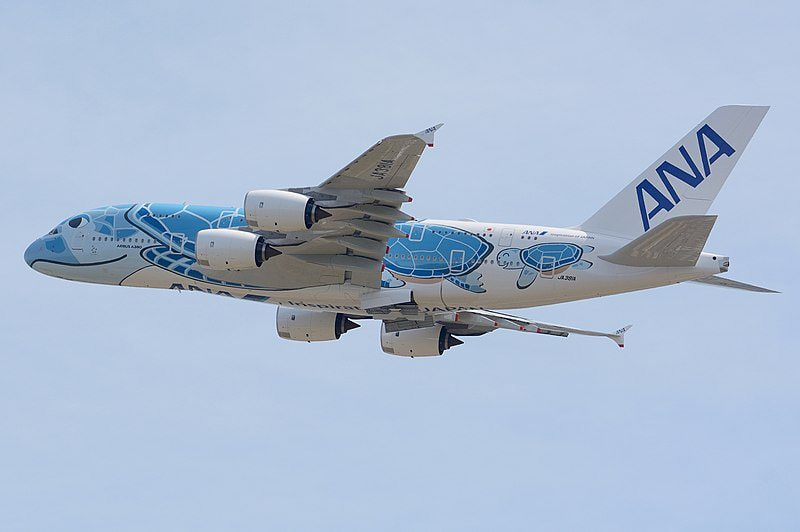 Masakatsu Ukon, CC BY-SA 2.0
Above: ANA's first A380 JA831A
All Nippon's answer to using the A380 focused not on traditional domestic or international business routes but instead on the leisure market between Tokyo and Honolulu. Using the A380 on such a service is undoubtedly overkill but even taking losses from the A380 operations was obviously preferable to letting Delta transform Skymark into a competitor at Haneda. 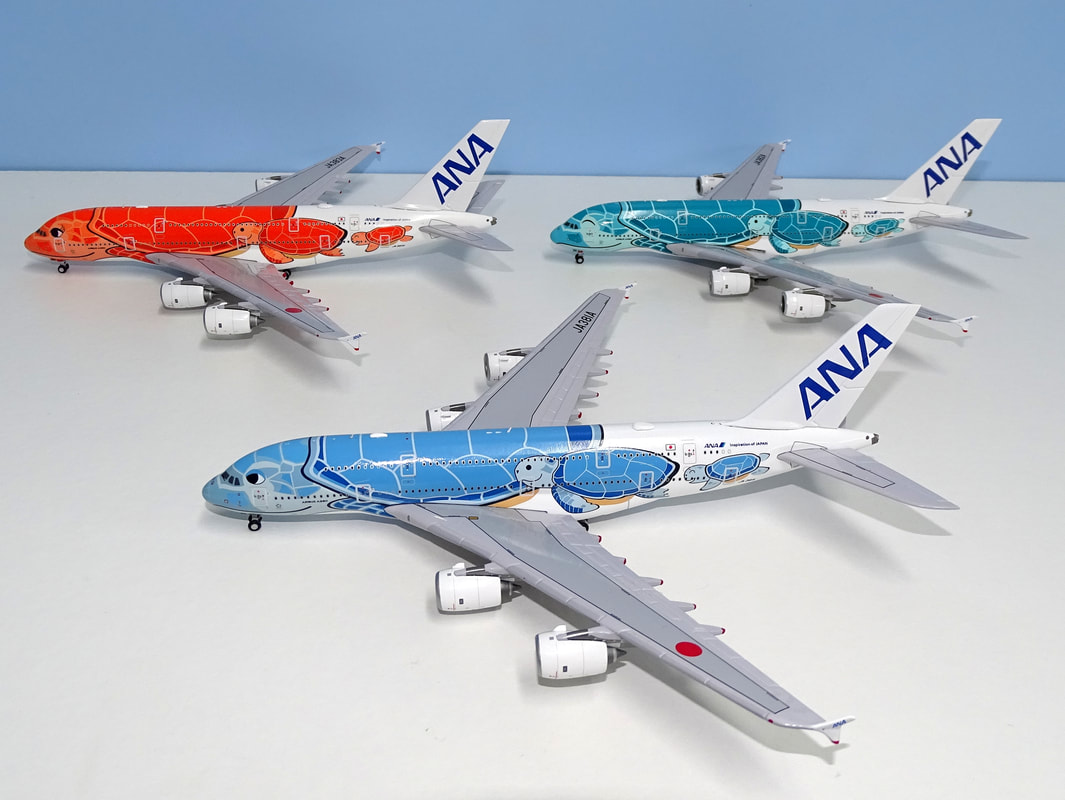 All Nippon also cleverly has made the A380 more than just an aircraft operating a route but has worked hard to make the flight itself an experience that the customer wants to have. Enter the 'Flying Honu' 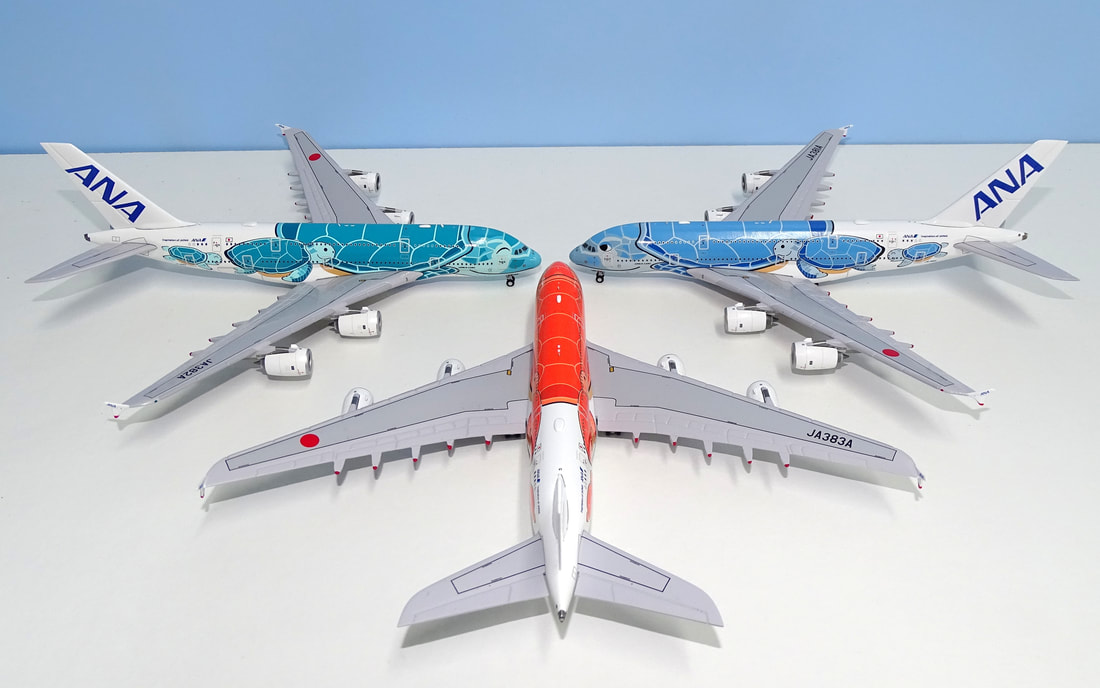 All Nippon decided to fit out its small A380 fleet in a four class 520 seat configuration - offering First Class for the very first time on the Honolulu route. It also introduced the ANA COUCHii seat - the first of its kind in Japan. The COUCHii allows 3 or 4 seats to be turned into a bed as was pioneered by Air New Zealand. In addition the aircraft would also feature a multi-purpose room that could be used by nursing mothers and ANA played heavily on these 'flying hotel' features. 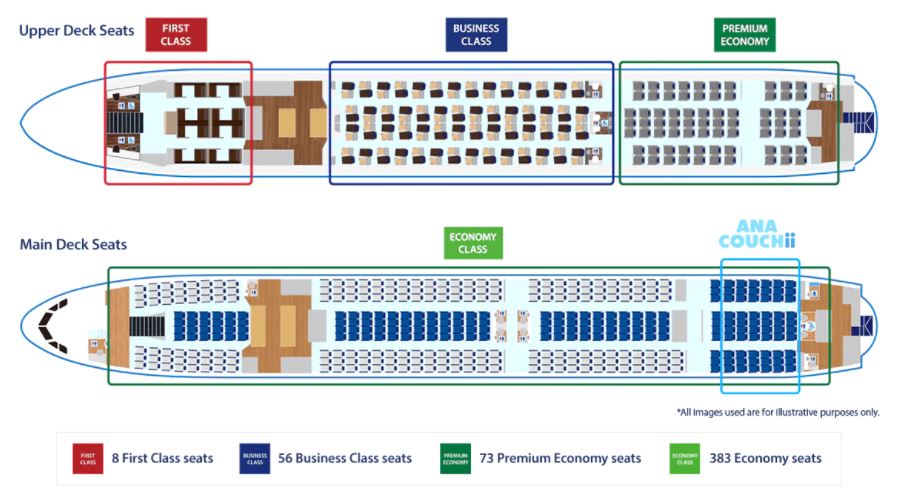 All Nippon also decided to make the A380s a spectacle to behold by launching a competition to design a set of liveries for the aircraft. 2,197 designs were received and the winner was a turtle family themed design using the Hawaiian Green sea Turtle and named as the Flying Honu (Flying Sea Turtle). Each aircraft was to be painted in a special colour and each turtle would gain its own unique facial expression. Each aircraft would also be named.

The first of the 3 A380s was delivered towards the end of March 2019 and the first revenue service, from Tokyo Narita, was operated on May 24, 2019. By July 2019 there was a daily A380 to Hawaii and from July 1 the 2nd aircraft joined the fleet. This made All Nippon the last all new A380 operator in the world. The plan was that once all 3 A380s were delivered there would be two daily A380 services to Honolulu, although of course Covid has changed that.

Somewhat surprisingly the Flying Honu services began as something of a success and by the start of 2020 ANA was looking to expand to the 14 a week schedule it originally planned. The A380s hadn't struggled to be filled and ANA had in fact achieved a 49% gain on the route year on year - no doubt partly due to the special fitout and Flying Honu narrative. Previously Japan Air Lines had been the market leader on the route but the A380s had allowed ANA to gain parity.

ANA's 2nd A380 JA832A 'Kai'
Unfortunately Covid conspired to damage ANA's plans for the A380s. The first aircraft, JA831A, operated 38 flights in February 2020, then 32 in March. JA832A operated 44 flights in February and 38 in March. Unfortunately the pair were grounded after that and their only service in the next year was a series of 5 flights to nowhere. These scenic sightseeing flights flew from Tokyo over the sea and countryside and then back to Narita. A sixth flight, lasting three and a half hours, was operated on May 23rd by JA831A to celebrate 2 years of A380 operations. 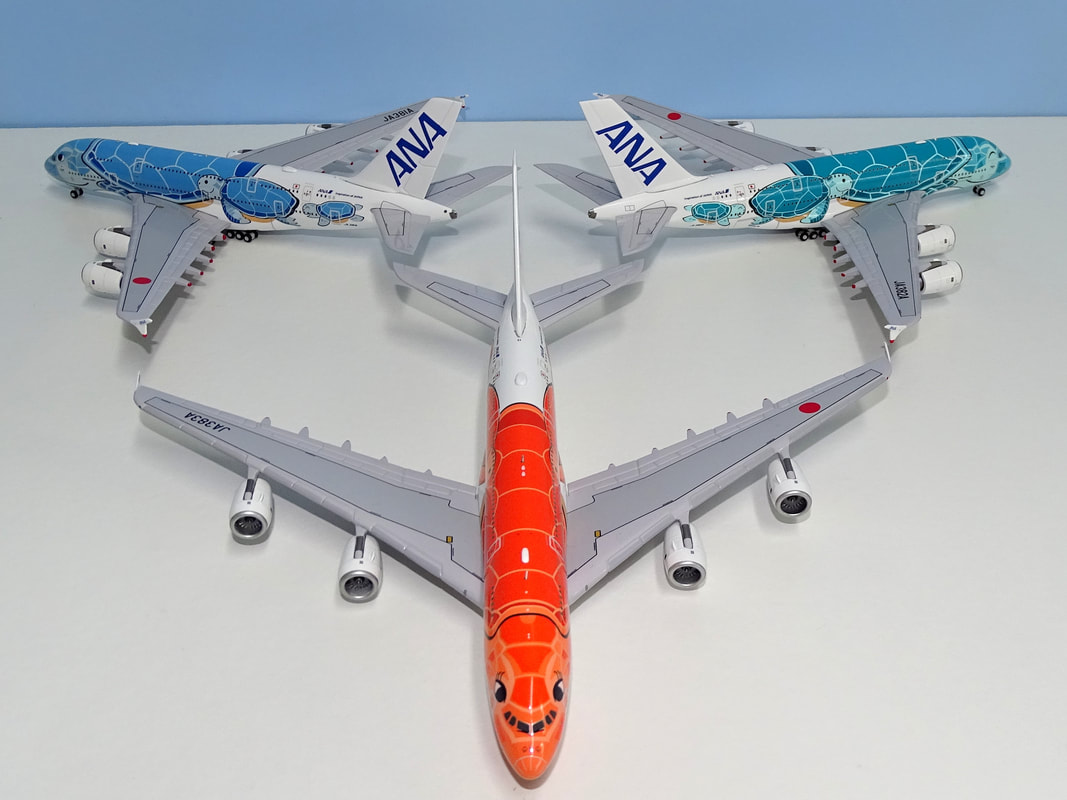 The third A380, JA833A, was completed and first flew on October 10, 2019 however following painting and cabin fitout the aircraft was not delivered. Her delivery finally happened in October 2020 but the aircraft remains stored at the Airbus facility in Toulouse.
Fortunately it seems ANA has plans to put the A380s back into service and has recently scheduled the first proper flights for the type in over a year, which will depart Tokyo on August 9th and August 13th. With the Pandemic threat hopefully receding in the coming months it may be that in 2022 All Nippon finally gets to operate all three of its Flying Honu. 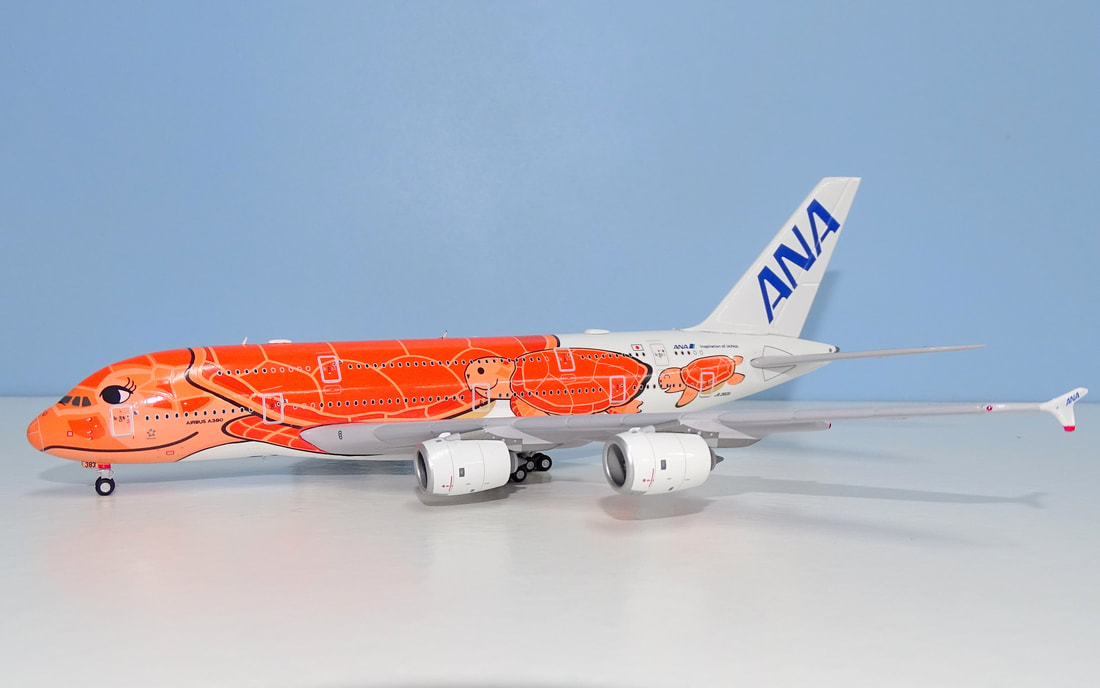